Review ‘The Vagrant Trilogy’: Palestinians in Exile, Longing for Home 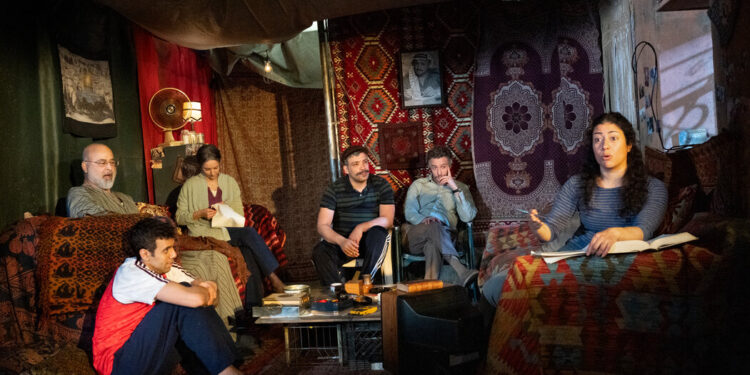 Mansour calibrated the story tension so skillfully that in every reality we are deeply involved in the fate of her characters, including Adham’s mother, Beder, embodied by Nadine Malouf as a funny, formidable, thoroughly unsentimental woman who has fought to give her brilliant boy the best possible chance. to give in a hostile world. Her other son, Hamzi (Osh Ashruf), is a gentle, kind man whom she left with his father as a child in that refugee camp, where he spends decades of his life.

Caitlin Nasema Cassidy, as Abir, and Bassam Abdelfattah, as Adham, honorably acquit themselves. But perhaps because they are understudies, they draw their characters in broader lines than they could if they had more time to settle into such big roles. (Tala Ashe and Hadi Tabbai, both beautifully Off Broadway in ‘English’ this spring, usually play Abir and Adham.) They are surrounded by solid company, even if some accents are smoothed in the London scenes.

However, those scenes are often fun, especially the visuals; Allen Moyer’s sets, Dina El-Aziz’s costumes and Tom Watson’s wigs are reminiscent of the 60s and 80s with a delightful effect. (Lighting by Reza Behjat; sound by Tye Hunt Fitzgerald and Sinan Refik Zafar; and video by Greg Emetaz are excellent too.) Malouf has comedic appeal as a flirtatious ’60s Londoner in fabulous orange slingbacks that can’t get her hand off Adham’s thigh. while Ramsey Faragallah is eccentrically funny as a mushy—and, it turns out, bigoted—80s professor who stirs his tea with the eraser end of his pencil.

Using Wordsworth’s poetry as the motif in the trilogy, Mansour explores the sustaining psychic power of a beloved landscape – a home you may have to leave, but be able to revisit. And through ‘Abd el-Hadi Fights a Superpower’ by Palestinian poet Taha Muhammad Ali, a piece of which forms a gripping monologue by Hamzi in the third piece, Mansour suggests the silent tragedy of the geopolitical bystander: ‘His God-given rights are thrown a grain of salt into the sea.”

In this final installment of the trilogy, we meet the two closely related characters who will break our hearts the most: Abir and Adham’s teenage daughter, the overly ambitious Jamila (Malouf, at her most beautiful), and her vulnerable brother, Jul ( Rudy Roushdi, tender love). Jamila is as scholastic as Adham and studies to go to university and join the wider world.

But for now she still pretends to be a talk show host with Jul and she a wonderfully successful guest with a string of doctorates.

“How did you get out of the refugee camp?” he asks.

Through May 15 at the Public Theater, Manhattan; publictheater.org. Running time: 3 hours 30 minutes.