Review ‘We are all going to the World’s Fair’: is it horror or just boredom? 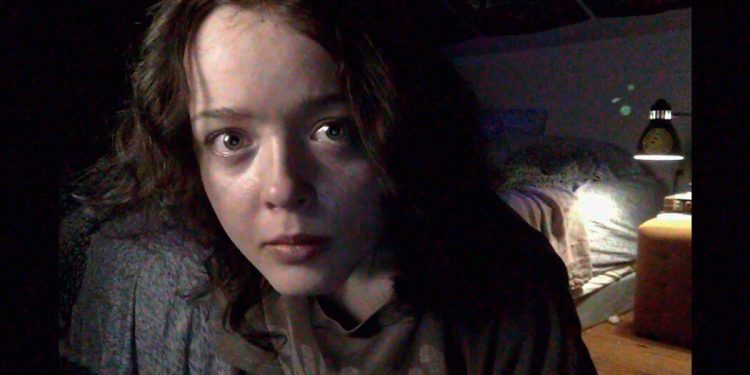 Way back in 1965, Susan Sontag noted that “we live under the constant threat of two equally fearful, yet seemingly opposing destinies: unrelenting banality and unimaginable terror.” Still true, but with the added wrinkle that it can be difficult to distinguish banality from terror these days.

‘We’re All Going to the World’s Fair’, Jane Schoenbrun’s story debut, exploits the overlap between boredom and anxiety, situating both in the mundane dystopian realm of the Internet. Part of a solid genre of web-based horror, the film turns the familiar rituals and hacks of online life into a source of fear.

A bored teenager named Casey (Anna Cobb) seeks distraction in a scary multiplayer game – a “creepypasta” – called the World’s Fair Challenge. After an initiation ritual that involves smearing blood on the screen of her laptop, she contributes videos to a growing number of stories that claim to document the game’s sinister consequences. People claim that they lose feeling in their bodies, that they turn into inanimate objects, that they gradually and irreversibly lose their grip on reality.

How scary is that? It’s hard to say, since for many of us the laxity, fear and dissociation of the World’s Fair Challenge is just another name for Tuesday.

Rather than shocking you with gimmicky terror as in the “Paranormal Activity” movies (an explicit point of reference for Casey and her fellow fair-goers), Schoenbrum opts for calm, ghostly effects, accompanied by a sombre score by Alex G (for Giannascoli). She also resists gaudy found-footage gimmickry. While much of what’s on screen is video collected by Casey’s devices, there are also times when the camera — the cameraman is Daniel Patrick Carbone — explores offline moods and realities.

Not that we learn much about Casey. She lives in a town that looks like it could be somewhere in the northeastern United States—patchy snow on the ground, battered highway malls, tree-covered hills in the distance—with her father, who is heard but not seen. seen. He has an assault rifle in the shed, which also has a video projector. Carey watches ASMR videos when she has trouble sleeping.

Most of what might count as her real life – school, work, friends – doesn’t exist or is none of our business. Appearing in a movie for the first time, Cobb has the knack of simultaneously arousing and repelling curiosity about Casey’s inner life. Is she a troubled adolescent putting her mental health and physical safety at risk, or a shrewd role-player who uses her wide eyes and soft features to construct an avatar of vulnerability?

She’s not all alone. Sometime after starting the Challenge, she receives messages from a player named JLB (Michael J. Rogers), whose avi is a nerve-wracking, hand-drawn figure with sunken eyes. The camera also follows him offline, to a mostly empty modern mansion that appears to be a very different world from Casey’s attic bedroom.

His presence in the film has the effect of evoking both terror and banality, creating a certain amount of tension that will eventually win. In the tradition of internet science fiction, “World’s Fair” teases the line between the real and the virtual, albeit in a frame of mind that is quietly ruminating rather than wildly speculative. This is not “The Matrix” or a fantasy of sentient AI. It’s a bit of bland, mundane 21st century Americana and a daydream of something more intense.

We’re all going to the World’s Fair
Not judged. Running time: 1 hour 26 minutes. In theatres.