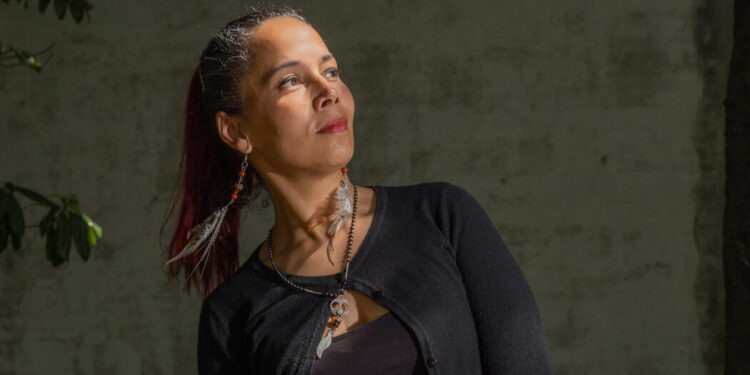 After Omar arrives in America, much of the operatic drama is channeled through what the production’s director, Kaneza Schaal, called “a language contest,” with many translations and mistranslations. When other enslaved people sing “Oh, Lord, how long”, Omar hears “Allah”. When a slave owner asks Omar to write the “Lord is my shepherd” in Arabic, he actually writes (in a script the owner cannot read) “I want to go home.” Omar’s journey, translated into opera, is about finding a language to hold everything he experiences together.

Giddens knows about that search. If writing about Senegal was too much for her, several scenes were familiar territory. When Omar arrives at a plantation in North Carolina, there is dancing, complete with a caller telling the dancers when to walk. It’s like a corn-shcking, a barn dance—an earlier iteration of the tradition Giddens learned from Thompson.

However, the sound of ‘Omar’ is always that of an orchestra. “I’ve written a lot on banjo, but nobody plays banjo on it,” Giddens said. “The orchestra becomes a banjo, and that’s the most radical move.”

While composing, Giddens recorded tracks, singing and accompanying them, which she sent to Abels. “She has an amazing talent for melodies, but what people may not know is how well she can create character with her voice,” he said. “She sang Omar or Julie or the auctioneer, and the personality was evident in the music.”

Abels then took those themes and orchestrated them, at times making the harmonic language more complex and applying the sense of tempo he developed when writing for film. The result was a mix of their voices, and, Giddens said, “Michael’s genius is figuring out where the lines are blurring.”