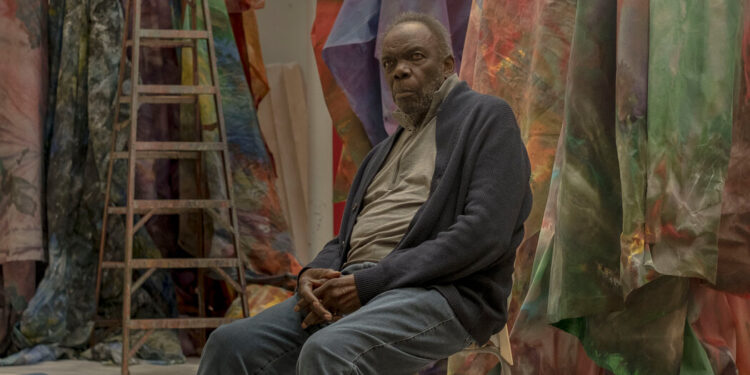 Sam Gilliam, a pioneering abstract painter best known for his lavishly colored Drape paintings that portrayed his medium more fully in three dimensions than any other artist of his generation, and who in 1972 became the first black artist to represent the United States at the Venice Biennale, died Saturday at his home in Washington. He was 88.

The death was announced by the David Kordansky Gallery in Los Angeles and the Pace Gallery, New York. The cause was kidney failure.

Mr. Gilliam was an anomaly twice. As a black artist, he was largely ignored by the higher echelons of the art world until late in his career. And as a black artist devoted to abstraction, he devoted his life to paintings that abstained from the recognizable images and overt political messages favored by many of his colleagues. Yet in many ways his art was opposed to both painting and political art.

Gilliam came of age in the 1960s and 1970s, a period of great experimentation for abstract painting and a time of social and political turmoil amid the Vietnam War and the black struggle for civil rights. But even in this context, he was particularly daring.

A brilliant colourist, he became known for emancipating his paintings from the flat linearity imposed by wooden stretchers. Instead, he draped his unstretched abstract canvases from ceilings in wide curves and loops, or pinned them, collected, to walls.

In “‘A’ and the Carpenter, I” (1973) he stacked a large piece of canvas painted with airy pink and blue clouds between two wooden sawhorses, introducing an element of manual labor into a work that seemed elegant, like it wasn’t finished yet. , and that, like much of Gilliam’s work, it looked different each time it was installed.

His efforts hovered between painting and sculpture, while his techniques evoked everything from Jackson Pollock’s drops to tie-dye. They pushed the medium well beyond the wall-hanging canvases created by Frank Stella and his followers at the time. Aggressive and lyrical at the same time, they invaded the viewer’s space, delivering moments of beautiful, fluid color while refusing a single, safe, centered point of view. And they challenged the viewer at every turn to decide, “Is this a painting?”

This in itself caused a kind of visual tumult that befits the turbulent times. A painting in the Museum of Modern Art’s collection is simply titled “27/10/69”, setting itself against the backdrop of a period of mass protests against the Vietnam War.

“The expressive act of making a mark and hanging it in space is always political,” he said in a 2018 interview with José da Silva in The Art Newspaper. “My work is as political as it is formal.”

A full obituary will be published shortly.