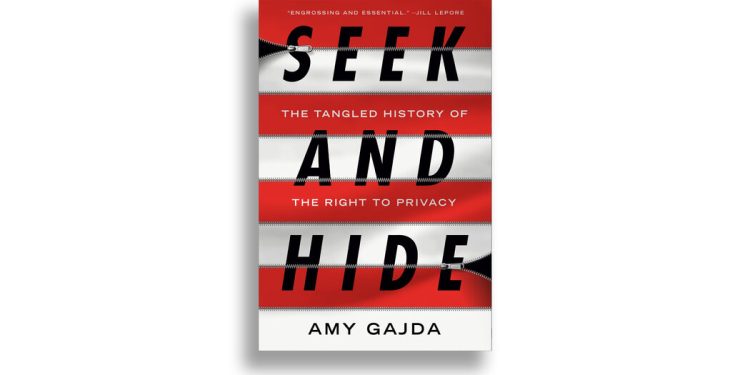 HIDE AND SEEK
The tangled history of the right to privacy
By Amy Gajda
376 pages. Viking. $30.

In her wry and fascinating new book, Seek and Hide, Amy Gajda traces the history of the right to privacy and the United States’ (understandably fraught) relationship with the First Amendment. Common English law includes the concept of “truthful defamation” – the idea that anything harmful to a person’s reputation, even if it is factually correct, can be treated as a criminal offence.

“Honest defamation” may sound like a contradiction in terms, but it came from the recognition that being ridiculed for something real in some ways to feel more disastrous than being mocked for something fake – which, as Gajda puts it, “the emotional damage and desire for physical revenge for the exposed person would be even greater than if the lie had been published.”

Emotions and feelings come through a lot in “Seek and Hide” – something I didn’t expect from a book that also does serious work as a history of ideas. A journalist before becoming a law professor, Gajda is an adept storyteller; even if some of her conclusions are controversial, she is an insightful guide to a rich and structured history that is easily caricatured, especially when a culture war rages on. You might think that the founders, who wrote under pseudonyms and spread gossip to silence their political rivals, didn’t pay much attention to “emotional harm,” but Gajda suggests otherwise. Ben Franklin noted that “every person has little secrets and privacy that are inappropriate to be revealed to even the best friend.”

Coincidentally, a number of people in Gajda’s book may appear as absolutists of free speech in one context and zealous advocates for privacy rights in another. Judge Louis Brandeis was known as a staunch defender of the First Amendment, but before joining the Supreme Court, he also co-authored the landmark paper “The Right to Privacy” (not to mention a vigilant protector of his own personal affairs). Upton Sinclair, whose book on the Chicago meatpacking industry turned its stomach and changed policy, paled all the newfound attention from sensational newspapers clamoring to learn more about his marital woes and what he ate for breakfast (a cup of water and six prunes). .

Another momentous turning point came more than a century earlier, when Alexander Hamilton taunted the pseudonym Thomas Jefferson for having a sexual relationship with an enslaved woman named Sally Hemings. In 1786, Jefferson had stated that “the liberty of the country depends on the freedom of the press, and it cannot be limited without being lost.” In 1803, he mused to the governor of Pennsylvania that “a few prosecutions” of journalism’s “most eminent offenders” would “make the whole gang more wary.”

This tension would persist over the years, a tug-of-war between “the right to know” on the one hand, and “the right to be left alone” on the other. Although the word “privacy” itself does not appear in the Constitution, the Supreme Court has nevertheless determined that protection is implied for it. Gajda shows that the courts’ emphasis on a free press or on privacy rights has changed over time, reflecting transformations in journalism – from 19th-century centpers to 20th-century muckraking to the rise of digital platforms in the 21st.

Transformations in cultural attitudes and prejudices have also had an effect. What is considered stigmatizing in one era may lose its stigma in another. Gajda gives the example of an outing with someone who is gay. In the past, some courts had ruled that reporting such information about someone who did not want it disclosed was “highly offensive” and therefore an affront to the “right of people to keep certain things quiet, to define themselves against the interests of others.” But as social norms have become more ‘inclusive’, Gajda writes, ‘more modern courts have decided that revealing one’s sexual orientation is not at all offensive and therefore not an invasion of privacy.”

On a social level, this sounds like a beneficial development — more inclusiveness, more tolerance — but Gajda says when courts have ruled this way, it hasn’t always seemed so forward-thinking to individuals who have felt let down by the law. In 1984, an appeals court ruled that the disabled U.S. Marine who rescued President Gerald Ford from a would-be killer had no right to privacy when a gossip column labeled him gay; publishing the Marine’s sexual orientation against his will helped “dispel the false public opinion that gays were timid, weak and unheroic,” the court wrote.

It didn’t matter to the court that the Marine was subsequently abandoned by his family, and that he gave a “broken, haunted speech” in which he insisted that he should be the one to decide whether to share details about his private life, Gajda writes, adding bitingly: “The people’s right to know that gay men can be brave too was more important.”

Just because Gajda acknowledges the personal damage caused by such decisions doesn’t mean she categorically sided with Team Privacy; the problems are too complicated, the history too cumbersome. After all, privacy claims are often used to protect the powerful against public scrutiny. She cites the clubbing between journalists and politicians in the pre-Watergate era, which afforded politicians a degree of privacy that they were simply not entitled to as civil servants. #MeToo behavior that would now be reported as news was long dropped as “gossip” in a “gentleman’s agreement,” she writes, “because it was a gentleman’s game.”

Gajda says she used to feel uncomfortable with the idea that courts could balance protections for an individual’s dignity and freedom with protections for a free press and freedom of expression; as a journalist, she feared an overzealous judiciary would curtail coverage of real news that powerful interests were eager to keep secret. Now she seems to see things differently, which seems to give me a surprising amount of confidence in the judiciary and even Facebook’s Oversight Board, of everything, to generate standards that balance speech with privacy and “unify the world as one.” .

Real? This strikes me as the kind of wistful generalization otherwise lacking in this clever and empathetic book. No one comes out pure in “Seek and Hide”, but everyone comes out as human.