Shelf life: our collections and the passage of time 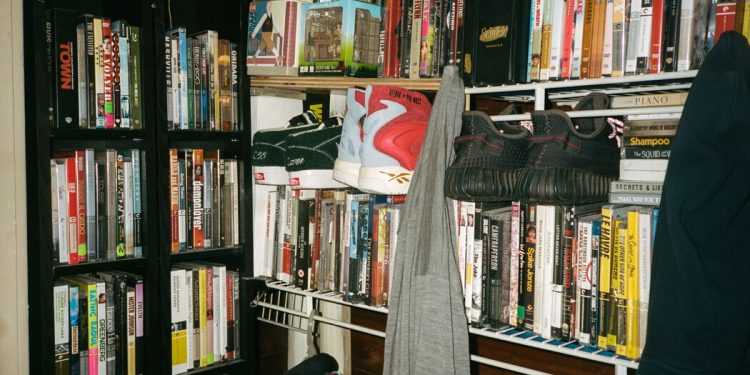 Like many people, I enjoyed Joachim Trier’s “The Worst Person in the World,” a young woman’s coming-of-age story that is also a kind of spiky romantic comedy. But the reason I can’t stop thinking about this movie (which I can’t discuss further without risking spoilers, so be warned) has to do with its status as a Gen X midlife cri de coeur.

The full-on cry — appropriately laced with self-mockery, self-pity, and very specific pop-cultural references — arrives in a single devastating scene toward the end of the film. Aksel (Anders Danielsen Lie), a comic book artist who, like the director, is in his mid forties, dies of pancreatic cancer. Julie (Renate Reinsve), the official protagonist of the film, who had previously broken his heart, comes to visit him in the hospital. She finds him furiously playing air drums when “Back to Dungaree High” by Norwegian death punk band Turbonegro pops into his headphones.

“It’s such a journey to survive,” the singer cries, and Aksel deals with matters of life, death and popular culture. He tells Julie that he spends most of his time listening to familiar music and re-watching his favorite movies, including “The Godfather,” “Dog Day Afternoon,” and David Lynch’s movies. “The world I knew is gone,” he laments.

What was that world? It was all about going to shops.

That description isn’t meant to downplay his youthful pursuits and passions, but rather to convey their magic and meaning to a millennial whose primary shopping experience will likely consist of clicking an icon rather than flipping through bins. Aksel continues to rap about the record, comic book and video empires he frequented.

His pilgrimage sites may be specific to Oslo, but they have counterparts in every city. Julie, who works and writes in a bookstore, is barely aware of the usefulness and charm of physical media. But she doesn’t quite understand the intense emotion—the desire, the meaning, the sense of identity—Aksel attaches to memories of a previous consumption style. This is not necessarily a difference of taste or sensitivity. It is more of a contrasting relationship with the material aspects of culture, a different way of living in a world of things, and it defines the generational schism between them.

I know which side I’m on. I don’t consider myself a shopper, but the truth is that in my time on this earth I’ve rarely been able to walk past a book or record store without going in, or leave empty-handed. I have surrounded myself with things, the most valuable of which have been scratched, written down, lent or given away. As Aksel says, “That’s what I’ve spent all my life on — collecting all that stuff,” but not for its monetary or even sentimental value. Those objects begin as vessels of meaning and signs of taste, but their acquisition becomes a kind of compulsion, stripped of its original passion. “I kept doing it when it stopped giving me powerful emotions,” Aksel recalls. “Now it’s all I have left: memories of useless things.”

I don’t fully identify with Aksel. He’s nicer, cooler (it took me some Googling to identify that Turbonegro song), a few years younger and a lot better than me. But it’s not enough for me to say, as people do these days, that I felt seen by looking at him. The effect was more intimate, more shocking, more embarrassing, as if Trier had dumped a laundry bag full of my favorite vintage band T-shirts on Aksel’s hospital bed to browse the entire movie-loving world. seen? I felt smoke.

Not that this is all about me. What Aksel says to Julie confirms him as a particularly sympathetic and self-confident specimen of a recognizable, not always popular type: not exactly a fan, but a very stubborn hybrid of connoisseur, collector and critic. You may know a version of this man from Nick Hornby’s novels (or the movies adapted from it), specifically “High Fidelity” and “Juliet, Naked.” Or maybe from movies by Kevin Smith, Noah Baumbach, Judd Apatow, and other Gen X authors. He could be your older brother, your ex or current partner, your best friend, or the long-lost friend you interact with on Facebook. Even your father. But then again, if you’re like me, the teenage ghost you smell could be yours

In real life, this kind of person is not always a man. Popular culture often assumes so much, and so does its whiteness, which is partly a failure of the collective imagination, and partly a matter of whose cultural obsessions are considered representative. Chuck Klosterman, arguably the emblematic white male culture critic of his (i.e. my) generation, makes this clear somewhat accidentally in his new book, “The Nineties,” when he suggests that the release of Nirvana’s album “Nevermind” is a more important world historic event than the fall of the Berlin Wall.

In typical 90s fashion, the claim is capped with knowledge and booby-trapped with irony. Klosterman understands that in the 90s there were a lot of people – and not just in Berlin – who never cared much about ‘Nevermind’. The appeal and exasperating value of his book stem from the same source, namely his brazen, extravagant effort to generalize from his own experience. “The Nineties,” with the modest, generic subtitle “A Book,” is not a history or a memoir, but rather uses each genre as an alibi for the other’s shortcomings. Of course, this is just one man’s memory of the things he saw, pondered, heard and bought in the last decade of the 20th century. But it is also, Klosterman frequently emphasizes, an account of what that decade really was like, a catalog of what was important then and in retrospect. You can argue with the second version – how can you write a cultural history of the American 1990s without even a single index entry for “Angels in America”? – but not so much with the first. What the 90s meant is open to debate. How the decade felt, maybe less.

This makes Klosterman, born in 1972, a cheerful, mainstream American counterpart to Aksel’s gloomy, alternative-minded Nordic intellectual. They’re both 90s guys, driven to explain something that’s in danger of being forgotten or misunderstood to people who weren’t there. To a certain extent it is the same thing, but not quite the thing one thinks it is. Klosterman wants to shed light on the reality of a unique and crucial period; Aksel tries to share with Julie the sources of his own sensitivity. But the cultural reference points are red herring. The deep motive is a desire to stop and reverse the movement of time, to regain some of the enthusiasm and bewilderment of youth.

The things you loved when you were young will never make you young again. The hesitant acceptance of this fact is the source of nostalgia, a condition that affects every modern generation in its own special way. Generation X members grew up under the heavy, hypocritical shadow of the baby boom’s long adolescence, among crates of LPs and shelves of paperbacks to remind us of what we’d been missing. Just as the baby boomers’ rebellion against their depressed and war-shaped parents defined their styles and attitudes, so our impatience with the boomers set us in motion. But I’m not talking so much about a grand story of history as about what Aksel might call the useless things – the objects and gadgets that make up the infrastructure of memory.

Every cohort has these. A CD in a plastic jewelry box is intrinsically no more poetic than a vinyl LP in a cardboard sleeve. On the Internet and on television shows like ‘PEN15’, a strong millennial nostalgia is making the chat rooms of AOL, Dance Dance Revolution, Tamagotchis and other things fetishized for which I was first too old. Gen Z will definitely be around soon, even if its signature cultural pursuits don’t seem to manifest themselves in physical objects.

And that, so to speak, is the core of Klosterman’s relentless cataloging and Aksel’s lament about lost record stores. The digitization of culture – the abstraction of all those beautiful things into streams and algorithms – feels like a permanent loss to many of us. What kind of loss is difficult to specify, as there is clearly an advantage as well. Back in the day, Aksel might not have been able to watch “Dog Day Afternoon” over and over again. He might have had to wait for it to show up in a revival home, or for the previous customer to return the single VHS copy to the video store. Now he can stream “Back to Dungaree High” on a playlist of his other favorites. Klosterman can watch any episode of “Seinfeld” or “The Simpsons” whenever he wants.

And I. Why is this not comforting? Why do I, like so many of my colleagues, mourn the passing of things that aren’t even dead? The end of movies, or at least moviegoing, has been heralded and criticized (and in some cases celebrated) with increasing intensity by the rise of streaming platforms and the pandemic-assisted shrinking of theater audiences. The danger is real, but that just means that the technologies of cultural consumption are always changing, and the art forms that flow through them tend to increase and decrease in unpredictable cycles. People continue to read, watch, listen, browse and seek not only distractions and distractions, but also sources of meaning and connection. Young people usually do this with a special eagerness, sometimes as if their lives are at stake.

I know that feeling. I miss that feeling. But in the end, it might not have much to do with music or books or movies. Aksel doesn’t list Woody Allen among his favorites (although Allen’s influence on “The Worst Person in the World” is easy to spot), but he does paraphrase one of Allen’s famous lines. “I don’t want to live on in my work,” says Aksel. “I want to live in my flat.” With Julie, and with their books and records and DVDs. What makes all those objects useless is that they don’t have the power to make that possible, which is paradoxically why people like Aksel collect them in the first place. As he says, “It’s not nostalgia. It is fear of dying.” Young people do not understand this. They will.