Tina Brown catches up with royal intrigue in ‘The Palace Papers’ 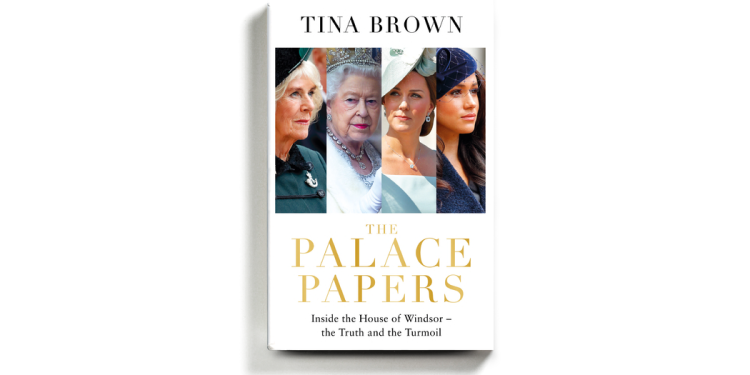 As Tina Brown, she’s more likely to rub shoulders with the elite while doing business: crouching under an umbrella with historian Simon Schama on her way to a 9/11 memorial, for example, or telling the sporty Mr. Parker-Bowles in 1981 that she did not hunt or fish. (“‘Really intellectual, are you?’ he said with a slight patrician grin.”)

She proudly claims to have been the first, in The Daily Beast, to reveal the extent of Jeffrey Epstein’s “looting.” She congratulates herself, an energetic shower-upper, for turning down one invitation: to the now infamous dinner party Epstein held for Andrew in Manhattan, attended by Woody Allen; she asked the publicist if it was a “predator ball.”

But as in her previous royal biography, Brown seems eternally torn between making fun of tabloid reporters for their most egregious transgressions and enjoying their discoveries. With a palpable nose, she describes Matt Drudge, who defended Prince Harry’s broadcast in Afghanistan, even as English media conspired to hide it, as an “American gossip boss”, while Rebekah Brooks, the former editor of the infamous telephone hacking News of the World, is “one of the great divas” of Fleet Street, a “flamboyant social operator” with “vulpine networking skills” and a “tumbling mane of curly red hair” (what does it mean exactly?).

Brown is thrilled to report that Prince Philip once gave a card with his private number to an anonymous socialite on the Caribbean island of Mustique, or that Princess Margaret gifted everyday household items such as irons and even a toilet brush to her loyal staff.

In her delightful memoir, “The Vanity Fair Diaries” (2017), Brown also seemed torn between America and England. Here, however, Old Blighty definitely wins (“wins” is a very Tina Brown term). Writing from a pandemic bunker in Santa Monica, she romanticizes rain: “the gloomy picnics in a soothing parking lot at Wimbledon; the wet box of strawberries at the Glyndebourne Opera House; the soggy creeps through the church door at Cotswold weddings; the attempt to preserve something resembling a hat as the skies open up at the Henley Royal Regatta. (And here’s Schama again, texting memories of the chilly Pimm’s parties on the college lawn, with “girls whose faces turn bluer than their eyeshadows.”)

Analyzing the younger generation, the one arguably saving the monarchy’s “whole crumbling theme park business,” Brown likens Catherine, the Duchess of Cambridge, to a heroine of Anthony Trollope (her birth family was “too tenacious and sincere for Dickens,” she assumes, while “George Eliot’s women, on the other hand, were too complicated and reflective”). As for Meghan, the Duchess of Sussex and former actress, her story seems to be emerging from “the back of bound copies of Variety” – which, given the state of print publications such as Brown oversaw, feels like short shrift.

“The Palace Papers” isn’t juicy, precise, nor meaty – there’s just not enough new mined from the whole royal mess. It’s frothy and candid, sort of “Keeping Up With the Windsors” with a Keats touch, and like its predecessor, it’s likely to go high on the charts.