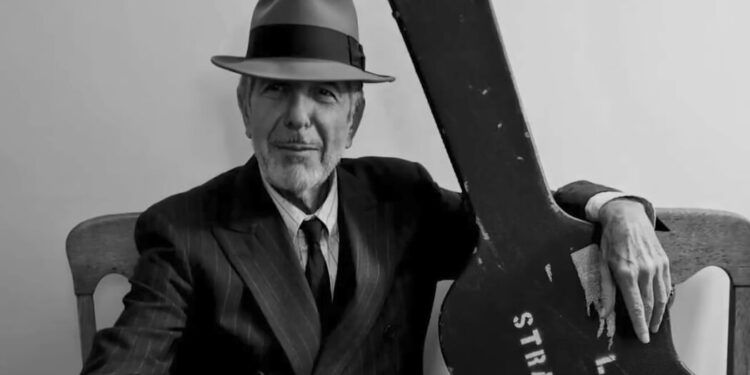 The documentary “Hallelujah: Leonard Cohen, a Journey, a Song” highlights the unpredictable paths that a singer-songwriter and his music walk. The directors, Dan Geller and Dayna Goldfine (“Ballets Russes”), follow Cohen’s career from his early days in Montreal through his 21st-century renaissance, exploring his creative process, his spiritual quest and how his arguably best-known song, “Hallelujah ‘ has taken on a life of its own.

Of the musician’s sage-like appeal, AO Scott wrote in a review of Critic’s Pick: “His gift as a songwriter and performer was rather to provide commentary and companionship amid the gloom, and a wry, candid take on the puzzles of the human condition.”

I spoke with Geller and Goldfine about their insights into Cohen’s life and lyrical artistry, and his enduring mysteries.

What did you learn about Leonard Cohen that surprised you the most?

DAN GELLER He was clearly struggling to find his sense of place in his life, his universe and his love life – and in his spiritual life. He was seeking so deep down through decades, and then that went away, as he said, ‘The search itself dissolved’, and a lightness came into his being. He couldn’t even explain why. And he didn’t want to explore it too much because he was afraid that examining it would make it disappear again.

DAYNA GOLDEN I’d thought the only reason he’d gotten back on the road in his mid-seventies, after a 14 or 15-year hiatus, was that all his money had been taken, and it was a financial compulsion. But just as importantly, Leonard felt that as an artist he had never quite reached the level he thought he had reached as a singer-songwriter. You really saw him then reach this pinnacle that made a Leonard Cohen concert so deep and so spiritual.

He is great in archival interviews because he essentially speaks in texts. What is that beautiful phrase he casually drops, “the foothills of old age”?

GOLDSTONE Yes! “70 is undeniably not youth. It’s not extreme old age, but it’s the offshoots of old age.” Isn’t that beautiful? I found Leonard’s humor both deeply satisfying and surprising. Especially in the first few decades of his career, he was portrayed as this monster of gloom. But if you really hang out with him and listen to what he says, he’s one of the funniest guys ever. It’s a very funny, dry humor.

Whenever possible, we tried to come up with something new so that even the most devout Leonard Cohen head would find something new in our film, or if we were using a piece of archival footage that had been used in the past, we’d try to reframe it . Rabbi [Mordecai] For example, Finley reframes some of the material in a really interesting way that gives you a new perspective.

What were the biggest revelations about “Hallelujah” and Cohen’s writing process?

GOLDSTONE I hadn’t realized how many verses Leonard had been writing and rewriting, erasing and reconfiguring in the five years it took him to write that song. And then the number of times he reconfigured the song while running it. I like in the movie where he takes it from the King David Old Testament version of the song and moves it into a secular realm.

GELLER There’s also the way other people have responded to the song — listening to John Cale or Brandi Carlile or Eric Church, to hear why they resonated with the song. It has given me a glimpse into the souls of these other singer-songwriters.

His notebooks are fascinating because there are versions of lines that have different resonances, but are also super powerful. “When David played, his fingers bled, he cried at every word he said” – that’s an incredible line right there too! He could have stopped anywhere along the way and might have had an equally powerful number.

GOLDSTONE You’ll also see the very first incarnation of “Anthem,” one of his most famous songs, and the first time he ever wrote that line, “There’s a crack in everything.” That almost brought tears to my eyes when I saw it – the first small steps of ‘Anthem’. You can also see his diary in those notebooks, and the first time he met Dominique Issermann, the woman he considered the first great love of his life.

Although you were unable to interview Cohen, did you hear from him during the making of the film?

GELLER The Dominique [interview] was interesting because she was staying with Leonard when we were filming her. She said he asked her, “Look, if they start asking questions like, ‘Was it your kitchen chair that he was holding on to when he wrote the song?’ don’t let them go that way.” This is the only direct or near-immediate feedback we’ve ever received from Leonard. Of course we would never ask that! But I thought: that’s good, because what he actually said was: don’t make the song and the lyrics concrete. Leave it open to interpretation and a mystery. Don’t make it specific to Leonard himself.

What is your favorite version of “Hallelujah”?

GOLDSTONE When I was involved in shaping the John Cale section, I couldn’t get enough of the John Cale version. And Jeff Buckley was the first “Hallelujah” I ever heard, and it blew me away. But at the end of the day, it’s Leonard Cohen who sings it at concerts for the past five years and gets on his knees night after night to start that song.

GELLER Buckley’s haunting guitar arpeggios are so beautiful and exquisite. I love that one and his beautiful voice. But Leonard played it live – we saw him do it twice at the Paramount Theater in Oakland. Just watching someone who is really in the middle of their song, a song that is filled with the complications of desire, of brokenness, of hope, of love, of sex – everything!