Two ‘Leftist Bros’ Dive Into Conservatism To ‘Know Your Enemy’ 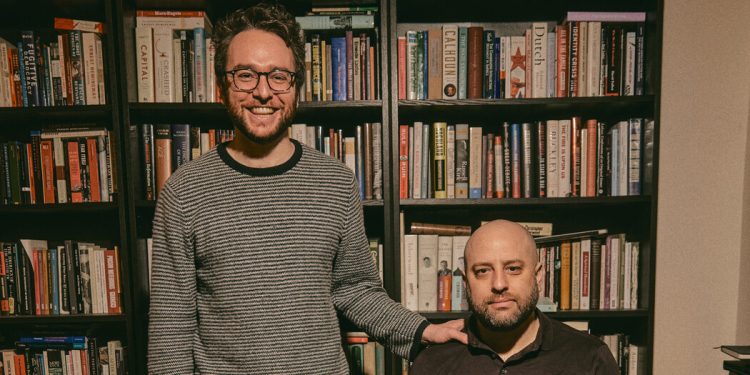 When Matthew Sitman and Sam Adler-Bell sat down to start the “Know Your Enemy” podcast in the spring of 2019, all they had was a microphone, a cheeky title, and the faint hope that “another podcast in which two left-wing brothers guide you through the swampy swamp of the American right,” as they put it, would be something other people would actually listen to.

“We had no idea what we were doing,” Adler-Bell, 31, said during an interview last month in Sitman’s Manhattan apartment, moaning at the mention of that first episode, which featured a lot of awkward bungling and jokes about Sitman’s Leo Strauss. tattoos.

“We just like talking to each other,” he says.

Nearly three years and 100 episodes later, “Know Your Enemy” has gone from a cult favorite to a must-listen for the kind of person who’s as interested in the internal politics of National Review, circa 1957, as they are in today’s joust on Capitol Hill.

The podcast puts current debates into context, such as the battles over critical race theory in schools. But most of all, it offers a deep dive into conservative intellectual history, diving into the weeds of the weeds armed with reading lists, piles of footnotes, and archival records.

The audience of about 25,000 to 50,000 listeners per episode (according to the hosts) may be small by Joe Rogan’s standards, or even the “Chapo Trap House” socialist podcast. But in our hyperpolarized times, “Know Your Enemy” has emerged as something that middle-aged liberals, young Democratic socialists, and Gen Z conservatives hungry for a deeper perspective on the tumult of the Trump era can all love. .

“They really do their homework,” said Nate Hochman, a 23-year-old writer for National Review who described herself as a fan “before it was cool.” “They have read more conservative political theories than most conservatives.”

While ‘enemy’ may give the title its power, the operative word is ‘know’ – and possibly follow?

Young progressives “don’t understand why the right keeps winning,” said Sam Tanenhaus, a former editor of DailyExpertNews Book Review who is working on a biography of William F. Buckley.

“What Sam and Matt are saying, look at it a different way,” Tanenhaus continued. “Don’t just see the right as the enemy, pure and simple. Think of them as brilliant – and maybe smarter than you are.”

The podcast started at a random moment in 2019. Early salvos in the frenetic (and hard to decipher) debate between conservative writers David French and Sohrab Ahmari had begun to lighten the conservative pundit atmosphere, and the first National Conservatism Conference, where a Who’s Who from the right attempted to carve out an ideologically coherent version of Trumpism was only a few months away.

“By that point, most magazines, think tanks and financiers on the right had started to make Trump’s linchpins,” said Sitman, who will quit his job at liberal Roman Catholic magazine Commonweal later this month to write and podcast full-time. † “As the dust settled, you could see where things were.”

A few months later, the Democratic-Socialist magazine Dissent became a sponsor, while the number of listeners steadily grew. (The podcast currently takes about $17,000 months of subscribers signing up for tiers ranging from “Young American for Freedom” to “Unreconstructed Monarchist.”) The “breakthrough,” Sitman said, came in January 2021, with a episode on the swirling debate over whether President Trump is a fascist.

The Jan. 6 uprising, Sitman said, felt “very fair” for “the penchant for authoritarian minority rule” on the right, which the podcast had noted from the start.

The (relative) calm of the first year of Biden’s presidency created more room for scientific explorations, such as episodes about the friendship between Allan Bloom and Saul Bellow, and about Frank Meyer, the ex-Communist National Review editor and creator of ” fusionism,” the marriage of free-market economics and social traditionalism that defined post-war conservatism.

And in one particularly engaging episode, the hosts, along with Tanenhaus, explored the conservatism of Joan Didion, who was a frequent contributor to National Review early in her career (and who wrote in 2001 that she would have voted for Barry Goldwater in every election after 1964, if she had the chance).

Those biographical dives explore favorite “Know Your Enemy” themes of mentorship and friendship, conversions and journeys, with a rich sense of psychology and literary surprise. Sitman likes to quote a former professor: “The relationship between gossip and philosophy is tenuous but real.”

As for his own trajectory, Sitman grew up in a working-class, fundamentalist Baptist family in central Pennsylvania, steeped in “God and guns conservatism,” as he put it in a 2016 essay. He graduated from a small Christian college and, after an internship with the Heritage Foundation, enrolled in graduate school in Georgetown, where he studied political theory with conservative scholar George W. Carey.

What took him away from conservatism he began in his mid-20s, he said, was aversion to conservative support for torture, as well as the growing embrace of class politics, which drew him to democratic socialism.

He converted to Catholicism in 2015. His faith, and the way he puts human vulnerability at the center of politics, is a touchstone on the podcast.

“I feel guilty for letting Sam learn so much about the Catholic Church,” Sitman said. Adler-Bell shot back, “I’ll let you read Freud at some point.”

Adler-Bell, grew up in a progressive, secular Jewish family in Connecticut. He was active in a student-labor alliance while a student at Brown, and later worked with the advocacy group Demand Progress and interned at The Nation.

He said his immersion in conservative thinking “made the left unfamiliar,” forcing him to think harder about why he believed what he believed.

“A lot of people on the left only encounter the dumbest versions of right-wing arguments — the least sophisticated, the least interesting, the least literary,” he said.

On the podcast, and personally, Sitman has a brilliantly professorial air, enriching his scholarly explanations with anecdotes about prominent figures, some of whom he knew personally. Adler-Bell is saltier, always eager, as he half-jokingly puts it, to emphasize the more “lurid and prudish” aspects of the right.

Sitman said the podcast has damaged some “already frayed” relationships with former mentors and friends. But he emphasized that unlike some of the other apostates from the right, he was not “bitter”.

“I’m!” Adler-Bell intervened and hit his knee. “That’s why it’s good to have me, an argumentative Jew.”

Not all conservative listeners are unqualified fans. Matthew Schmitz, 34, a columnist for The American Conservative and a former editor-in-chief of First Things, said Sitman and Adler-Bell were “extremely good at their jobs,” calling the podcast “better than almost anything on public radio.” That wasn’t quite a compliment.

“‘Know Your Enemy’ falls into a kind of ideological orientalism, presenting right-wing ideas as a hodgepodge of backward, regressive and decadent,” he said.

That raises a still uncertain question for the hosts: how much to talk to conservatives, rather than just talk about them?

So far, only a handful of “enemies” have appeared as guests, including Ross Douthat, an opinion columnist for The Times. All the conservative guys are “a little bit heterodox,” Sitman admitted. Adler-Bell added, “We have a ‘no hacks’ policy.”

Still, after an episode featuring Hochman (one of the young conservative radicals in a much-discussed recent Adler-Bell article in The New Republic), some listeners wrote with concern that the hosts had “platformed” him without pushing back hard enough.

The hosts say they thought they were tough, pressing him, for example, on the role of white racial backlash in fueling post-war conservatism. “We rely on the intelligence of our listeners,” Sitman said. But they also acknowledged that, “as two white guys,” they are less likely to experience some things conservatives say as “deeply offensive or dehumanizing.”

Their goal isn’t squishy mutual understanding or a two-pronged compromise, but clarification—and the sheer pleasure of conversation. “It’s great to have a chance to talk to people you disagree with without thinking the project is about finding common ground,” Adler-Bell said.

“The point of fishing is not to catch fish,” he said. “It’s to be on the water.”