Ukrainians fill streets with music, echoing war zones of the past 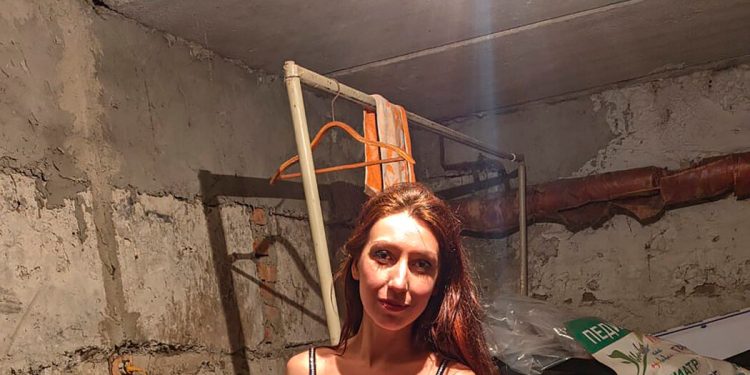 When bombs began to fall on the Ukrainian city of Kharkov late last month, forcing Vera Lytovchenko to hide in the basement of her apartment building, she took her violin with her, hoping it would bring comfort.

In the weeks that followed, Lytovchenko, a violinist from the Kharkov Theater of Opera and Ballet, gave impromptu concerts for a group of 11 neighbors almost every day. In the cold, cramped cellar, with nothing to decorate but candles and yellow tulips, she sang Vivaldi, Tchaikovsky and Ukrainian folk songs.

“My music can show that we are still human,” she said in an interview. “We don’t just need food or water. We need our culture. We are not like animals now. We still have our music and we still have our hopes.”

While their cities have been besieged by Russian troops, Ukrainian performers have turned to music for comfort and connection, filling streets, apartment buildings and train stations with the sounds of Beethoven and Mozart.

In the middle of a deserted street in Kharkov, a cellist played Bach, with the blown-out windows of the regional police headquarters behind him. A trumpeter played the Ukrainian national anthem in a subway station used as a bomb shelter. A pianist played a Chopin etude in her apartment, surrounded by ashes and debris left behind by Russian shelling.

Impromptu performances by ordinary citizens are a feature of many modern conflicts, in the Balkans, Syria and elsewhere. In the age of social media, they have become an important way for artists in war zones to build a sense of community and draw attention to suffering. Here are some notable examples.

Aeham Ahmad gained attention in 2013 when he began posting videos of him playing the piano in the ruins of Yarmouk, a neighborhood on the outskirts of Damascus, Syria, which was devastated during his country’s civil war. Sometimes friends and neighbors sang along. The news media started calling Ahmad the ‘Pianist of Yarmouk’.

At the time, government forces kept his neighborhood cordoned off with artillery and, at times, air strikes, while insurgent groups fought for control. Many people suffered from lack of access to food and medicine; some died.

“I want to give them a beautiful dream,” Ahmad told DailyExpertNews in 2013. “To at least change this black color to gray.”

Musicians have long played a role in helping people cope with the physical and psychological devastation of war.

“They are trying to restore a community torn apart by war”† said Abby Anderton, an associate professor of music at Baruch College who studied music in the aftermath of the war. “People have a real desire to create normality, even when everything around them seems to be disintegrating.”

During the Bosnian War in 1992, Vedran Smailovic became known as the “Cellist of Sarajevo” after he commemorated the dead by playing Albinoni’s Adagio in G minor every day at 4 p.m. on the ruins of a square in downtown Sarajevo. He continued to play even as 155-millimeter howitzer shells whistled at the city.

“Many, like Mr. Smailovic, who played the cello for the Sarajevo Opera, reach for an anchor amid the chaos by doing something, however small, that will take them back to the stable, reasoned life they previously led.” reported The Times at the time. †

“My mother is Muslim and my father is Muslim, but I don’t care,” Smailovic said at the time. “I’m a Sarajevan, I’m a cosmopolitan, I’m a pacifist.” He added: “I’m nothing special, I’m a musician, I’m part of the city. Like everyone else, I’m doing what I can.”

A Russian Orchestra in a War Zone

While ordinary citizens have become famous for their wartime performances, governments have also sought to promote wartime nationalism by organizing concerts of their own.

Anna Netrebko. The Russian superstar soprano will not appear at the Metropolitan Opera this season or next after failing to comply with the company’s demand to distance herself from Russia’s President Vladimir V. Putin in the wake of the invasion of Ukraine.

Vladimir Potanin. The Guggenheim Museum said the Russian businessman and close associate of Mr Putin would resign as one of its trustees, a position he took on in 2002. While no reason was given for the decision, the museum’s statement referred to the war in Ukraine.

Gerard Depardieu. The French actor, who became a Russian citizen in 2013 and one of the closest Western celebrities to Putin, took a surprising stance when he denounced the war during an interview.

In 2016, Russian conductor Valery Gergiev, a friend and prominent supporter of Russia’s President Vladimir V. Putin, led a patriotic concert in the Syrian city of Palmyra, shortly after Russian airstrikes helped drive Islamic State out of the city.

On Russian television, the concert was interspersed with videos of the atrocities committed by the Islamic State as part of a propaganda effort to foster pride in the Russian military, including its support for the government of President Bashar al-Assad of Syria. Putin thanked the musicians via a video link from his holiday home on the Black Sea.

Classical music has long been used for political purposes. Emily Richmond Pollock, an associate professor of music at the Massachusetts Institute of Technology, said it’s often invoked in wartime because “it’s constructed to be timeless, powerful, and human.”

But a lot of music is also abstract, so it’s used in different ways.

“You can think of pieces like Beethoven’s Ninth Symphony, which has been used in moments of liberal triumph as well as right-wing triumph,” Pollock said. “Many pieces are very malleable.”

Performances in war zones draw the public’s attention, partly because of their juxtapositions with scenes of destruction and despair. This explains their great popularity on social media, which has become an important tool for artists in conflict zones to draw attention to the suffering around them.

“They can use Instagram and social media platforms to engage people who are geographically distant in their very real struggles,” Professor Anderton said. “When we hear someone play a Chopin etude or prelude on a destroyed piano, there is a sense of shared humanity†

When Russia began its invasion in late February, Illia Bondarenko, a conservatory student in Kiev, was looking for a way to highlight Ukraine’s struggles. In collaboration with violinist Kerenza Peacock, who lives in Los Angeles, he started what he called a “violin flash mob.” He mixed a video in which he performed a Ukrainian folk song in a bomb shelter with virtual performances by 94 musicians around the world.

“It is a great message to all civilizations in the world that the Ukrainian people are not weak and we are strong,” Bondarenko said in an interview. “We will not give up and we will stand no matter what.”

Lytovchenko, the violinist, continues to post performances online. She plans to record a duet with a pianist who lives abroad and said she raised about $10,000 to help Ukrainian families.

“I’m not sure if my music can withstand the violence and stop the war; I’m not that naive,” she said. “But maybe it can show that we’re not so aggressive, that we don’t have hatred in our hearts, that we can still be human.”