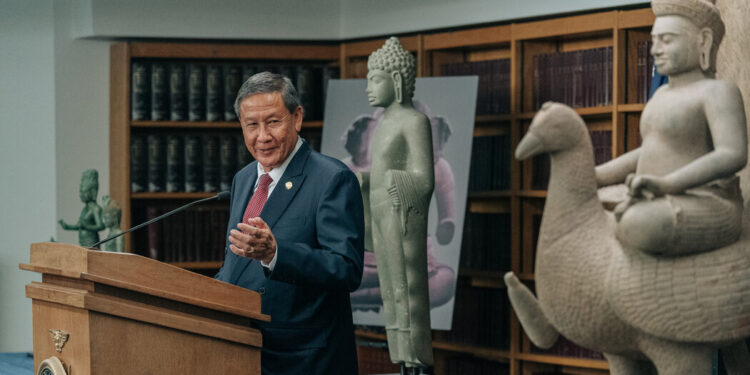 US and Cambodian officials on Monday urged museums and private collectors to investigate the origins of their Khmer art to determine if it had been looted, and the officials showed the ubiquity of such thefts at an event that marked the return of 30 antiquities. to Cambodia fourth.

Behind the officials stood seven masterpieces of the country’s ancient heritage, including a 10th-century sandstone statue known as “Skanda on a Peacock,” which investigators say was stolen from a temple by a Khmer Rouge conscript and claimed to be looter in 1997.

The Cambodian government will also welcome a five-foot-tall sculpture of a Hindu god, Ganesha, but the four-ton sculpture was only pictured on a poster Monday over fears it would break elevators in the US attorney’s offices in Manhattan for the southern United States. district of New York.

Both objects are said to have been looted from the archaeological site on Koh Ker, the capital of the ancient Khmer Empire.

The antiquities being repatriated, the officials said, were all traded by an organized looting network and sold on the Western art market through Douglas AJ Latchford, a British art dealer and collector of Cambodian antiquities. He died in 2020, less than a year after being charged with smuggling looted relics and hiding their tainted histories by falsifying documentation to help sell them.

“It’s like a return of the souls of our culture back to our peoples,” Keo Chhea, Cambodia’s ambassador to the United States, said at Monday’s news conference.

The relics were returned as part of an investigation into Mr. Latchford by federal prosecutors in New York and the Department of Homeland Security. They were seized by two people and an American museum that had owned the artifacts. All three worked together with researchers.

“We commend individuals and institutions that have decided to do the right thing,” said Damian Williams, the U.S. Attorney for the Southern District, “and after learning about the origins of the antiquities in their possession, decided to voluntarily returned to their home country.”

The owner of “Skanda on a Peacock,” which features the Hindu deity Skanda on the bird, inherited the statue from a collector who bought it from Mr Latchford in 2000 for $1.5 million, according to court documents. The heir, who has not been publicly identified, agreed to relinquish possession of the artifact to federal authorities.

Twenty-five of the antiquities being returned to Cambodia were turned in by James H. Clark, the Internet pioneer and founder of Netscape, who said he spent about $35 million purchasing dozens of Cambodian and Southeast Asian antiquities, some of which he bought. commonly used to furnish a penthouse in Miami Beach.

“One day I remember walking through my apartment looking at these objects and thinking, ‘They should really be in a museum, not privately owned,'” said Mr. Clark in a phone interview on Monday. “And there they will be.”

Federal officials have said that Mr. Latchford mr. Clark tricked into believing the artifacts were being sold legitimately and that Mr. Clark, once they proved otherwise, agreed to turn in 35 items, most of which were from Cambodia. Those items include the elephant-headed Ganesha, a bronze seated Buddha, and a sandstone Buddha.

The 30 artifacts named Monday are expected to arrive in Cambodia in October, after which the government hopes to hold a national celebration to mark their return, said Bradley J. Gordon, a lawyer representing the country. Government officials plan to eventually show the items to the public, he said.

Four of the antiquities were turned in by the Denver Art Museum. The museum declined to comment on the ceremony, but said it is also currently investigating two objects from Thailand linked to Mr Latchford.

The criminal case against Mr Latchford has been dropped since his death. While alive, Mr Latchford, who had been commended by the Cambodian government for his scholarship to Khmer art and his contributions to state museums, had argued that Westerners who bought such antiquities and sold or donated them to museums saved them from potential devastation.

At the ceremony Monday was a delegation of Cambodian officials who spent 10 days touring the United States, visiting museums in California, Texas, Pennsylvania and New York to request documentation related to the Khmer collections at the institutions.

Their efforts are part of a global effort to recover hundreds of Khmer and pre-Khmer artifacts that have made their way around the world as a result of decades of looting. Their mission has been greatly enhanced with the help of a Cambodian man named Toek Tik, the former Khmer Rouge conscript, who has revealed details of his prolific looting career to authorities as a way to redeem himself for actions he now regrets. .

Sopheap Meas, the deputy director of antiquities management at the Cambodian Ministry of Culture and Fine Arts, said that during her travels she had seen many unique objects that she said should never have left Cambodia.

“The burden of proof should be on the museums to show that they have the right to legally own Cambodia’s national treasures,” she said.

The overarching message of the event, according to officials from both the United States and Cambodia, was that while these objects were repatriated, many more of illegal origin remained in the hands of private collectors and museums. Mr Williams encouraged “anyone who believes they have illegally obtained Cambodian or other antiquities into their possession to come forward.”

“We know this problem goes much further, deeper than one man’s activity,” Chhea said.