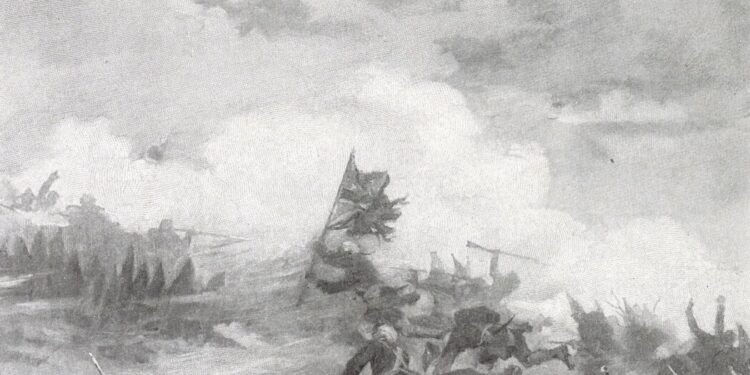 This spring, a team of archaeologists and volunteers began painstakingly digging into the history of Fort Mercer, a Revolutionary War fort on the Delaware River that is now the centerpiece of Red Bank Battlefield Park in National Park, NJ.

During the war, Continental Army soldiers were stationed at the fort to prevent the British and their Hessian mercenaries from resupplying their troops in nearby Philadelphia. On October 22, 1777, the army repulsed a major attack by Hessian troops. Little known today, the Battle of Red Bank was short and fierce, marking one of the worst defeats suffered by the Hessians in the war.

The archaeologists focused on excavating a trench that had been used to defend the fortress during the battle. “My gut feeling was we’d be looking at the kind of garbage a garrison might throw out,” said Wade Catts, chief archaeologist at South River Heritage Consulting in Newark, Del. mr. Catts led the dig with Jennifer Janofsky, the park director and historian at Rowan University in Glassboro, NJ

Instead, on June 26 at about 2 p.m., the last day of fieldwork, the team found a leg bone; they soon learned that it had belonged to one of the attacking Hessians. It was the first human bone found on the site since 1904, when a new fence was built on the battlefield. Over the next few weeks, the group found the remains of 14 individuals, promising to give scientists a detailed picture of military life and death at the time. “I didn’t really think we were going to have a mass funeral,” said Mr. catts.

On the day of the attack in 1777, the Hessians must have thought the same thing. The force of 2,300 mercenaries was led by Colonel Carl Emil Ulrich von Donop, a courageous leader with a fiery temper, according to letters written by his officers. The fort was defended by just 534 soldiers, including members of the Sixth Virginia Regiment and the New Jersey Militia, as well as members of the First and Second Rhode Island Regiments, two of the nation’s first integrated military units. Forty-eight of the American soldiers were black; the regiments also include Native Americans of the Narragansett people.

Colonel von Donop was convinced of the victory. Fort Mercer “will be Fort Donop or I’m dead,” he wrote to General William Howe, commander of the British armed forces. When the Hessians arrived at the fortress, Colonel von Donop sent an officer to call on the Americans to surrender. The King of England orders his rebellious subjects to lay down their arms. “If they go into battle, no quarter will be given.”

The American commander, Colonel Christopher Greene, quickly replied: The Americans accepted the challenge, and neither side should take a quarter. The fighting started at 4 p.m. From the river, 13 Pennsylvania Navy galleys immediately shelled the Hessians with cannon fire, and the soldiers at Fort Mercer opened their own muskets and 14 cannons. Two battalions and a regiment of Hessian soldiers advanced through the barrage. Their attack was delayed by trees that had been felled; branches had been sharpened and stacked in a row around the fortress. The battle lasted only 75 minutes; when it was over, 377 Hessian soldiers — and just 14 Americans — were dead.

The horror of that afternoon soon became clear to archaeologists. From an excavation pit 10 feet wide, 30 feet long and 1.2 meters deep, they found 14 skulls and numerous other human bones. Mr Catts believes that the soldiers belonged to the Regiment von Mirbach and that they stood in the middle of the Hessian formations during the attack. One soldier’s injuries, Mr Catts said, included “a musket ball in the lower part of his back above where his pelvis should be; a lead canister shot down the center of his back, where he had lost his thoracic vertebra; and then a one-and-a-half inch iron grape shot that appears to have been taken from his left arm.”

dr. Janofsky noted that the ships on the river were firing chain shots and bar shots at the Hessians, ammunition designed to destroy a ship’s rigging. “These guys were touched by all sorts of things,” said Mr. Catts. “What a horrible place this would have been.”

According to the accounts of surviving Hessian officers, most of the wounded were left on the battlefield: the Hessians had not brought any wagons to carry them and the American soldiers, fearing another attack, remained inside the fortress. “It is painful for me to lose so many good people, I cannot describe it and I have not recovered from it,” wrote Lieutenant Colonel Ludwig Johann Adolph von Wurmb, who took part in the attack, a few days later. “The tragedy of our poor wounded here in America is indescribable without tears, and those left behind with the enemy have no help.”

That night, a group of American soldiers ventured to repair some of the fortifications. A voice shouted from the battlefield, “Whoever you are, get me out of here.” It was Colonel von Donop, who had been shot in the hip.

According to Captain Thomas Antoine Mauduit du Plessis, the French engineer who led the group, an American soldier exclaimed, “Well, it’s agreed that no quarter of an hour will be given?” The Colonel replied, ‘I am in your hands. You can take your revenge.” The Americans took him to the fort and nursed him until he died a week later.

The rest of the Hessian wounded were left where they lay until the next day, when American soldiers were tasked with burying the dead. The ditch in front of the fortress may have been an easy place to dispose of the bodies, said Dr. Janofsky. “Are we looking at someone who was shot, died and is buried?” she said. “Or are we looking at what the funeral party did on October 23, 1777, which essentially threw bodies into a handy hole?”

The first human bone recovered, a femur, was found in the excavation pit by Joe Reilly, a self-confessed history nerd and volunteer, and Wayne Wilson, another volunteer digger. As soon as it came up, all digging stopped – the standard procedure when human bones are found. Anna Delaney, the New Jersey State Police forensic anthropologist, was called in and determined that the femur did not belong to someone who had recently died. The advanced state of disrepair made that clear, she said.

Over the next few weeks, Mrs. Delaney to remove all human remains from the site and keep them in her lab, where they will be analyzed and hopefully reveal details about the soldiers’ lives. She and Thomas Crist, a forensic anthropologist at Utica University who has worked on Revolutionary War remnants, plan to study the chemical makeup of the bones. Certain stable isotopes and the presence of trace minerals can help determine where a person grew up and what that person’s diet and health were like later in life.

Mrs. Delaney and Dr. Crist also hope to recover DNA from the bones and from traces of blood on some artifacts. Genetic analysis could allow the researchers to reconstruct the soldiers’ family trees and figure out their identities, Ms Delaney said: “To be able to give one of these soldiers their name back, to give something back to their family, I think that that’s actually the most exciting part of the whole process.” Once the analyzes are complete, the bones will be reburied at a location yet to be determined.

Some of the artifacts recovered at the site tell their own story. A row of buttons was found, laid out as if resting on a coat that had been thrown into the ditch and then rotted away. The buttons match the description of those on the Regiment von Mirbach uniforms, said Dr. Janofsky. She suspects the jacket was used to transport severed body parts to the ditch.

Another intriguing artifact found at the site was a British gold coin, worth about a month’s salary for the average soldier, which Mr. Catts believes belonged to Lieutenant Colonel Ernst Rudolf von Schieck, who was in command of the Hessian regiment and died in the fighting.

for dr. Janofsky’s human remains add poignancy to the story of the battle. Among the dead was a man between the ages of 17 and 19, the same age as many of her history students. “Very few of us have seen the violence of the battlefield, and that’s what we’ve been looking at in recent months,” she said. “I feel we have a duty to make our visitors understand that moment.”