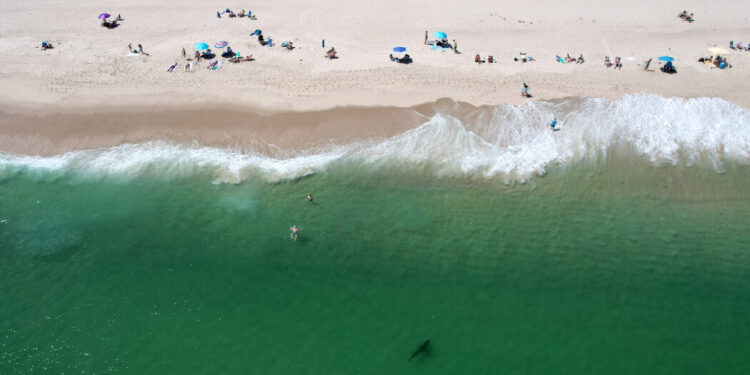 For Shiffman, our inability to conceptualize relative risk is both an ecological and aesthetic tragedy, undermining conservation efforts and preventing us from rejoicing in the glory of sharks—with their skin teeth, their utter lack of bones, and their ability to injured fish from a mile away. The syllogism he suggests is comforting: only idiots are afraid of sharks; you are not an idiot; therefore you are not afraid of sharks.

The plain language contrasts with a 2005 bestseller, Susan Casey’s “The Devil’s Teeth: A True Story of Obsession and Survival Among America’s Great White Sharks.” It was made for goosebumps. When two researchers in Casey’s book jump on a boat to observe shark activity, it isn’t long before “the dorsal fin of myth and nightmare rose up from below and tunneled toward them like a German U-boat, creating a significant wake arose.” The title of the book also plays on our fears, with a slight misdirection; the “devil’s teeth” does not refer to sharks, but to the craggy Farallon Islands in California where they cluster.

The dominant shark iconography of my childhood (18 miles from the Farallon Islands, by the way) took the form of a bumper sticker from a nearby surf shop. The sticker was everywhere. It looked like a smoking ban, with a red circle bisected by a slash – but instead of a cigarette, the circle contained an image of a shark. Like any respectable piece of knowledge, this was not what it seemed. The idea of ​​banning sharks like cigarettes or double parking was a cosmic joke. The surfers wearing the sticker were on the same page: Disguising yourself as prey and paddling in a shark habitat was equivalent to signing a liability waiver.

I visit Marconi less often now, but more out of incompetence than out of fear. The writer and naturalist Henry Beston described the area in 1928: “The peninsula is further out to sea than any other part of the Atlantic coast of the United States; it is the outer of the outer shores.” Beston, who retired to the dunes after his experiences in World War I, likened the sound of a rising tide to ‘the fury of battle’. The sandbars along the coast shift on what appears to be an hourly basis, resulting in waves that repel attempts at coercion. Calculating the coordinates where swell, wind, current and tide harmonize requires a detailed knowledge that, as it should be, is reserved for the local population.

An app called Sharktivity tracks sightings in the area, with the idea of ​​”reducing encounters and promoting safety.” Whenever a white shark sighting is confirmed near a public beach, app users receive a red alert. Some of the tagged sharks have been named. (Agnes, Big Papi, Turbo, Sean.) Every once in a while I check the app to see where the gang is meeting, though Sharktivity warns that “THE ONLY WAY TO COMPLETELY RULE AN ACCURATE MEETING WITH A SHARK IS ON THE COAST TO STAY.”

From Shiffman’s book I learned that death by… Carcharodon carcharias and friends is much less likely than most shark media would have us believe. The terrifying powers of the bar chart at Marconi have diminished. But maybe this is because death by a shark no longer seems to me the worst way to perish compared to the alternatives. Since reading “Why Sharks Matter,” I’ve played out the scenario in my head many times. Floating in salty bliss, I feel an aberrant shift in water molecules. There will be a statistically different big white. It may be Agnes. I am touched, I go into shock and I bleed under a vast and indifferent sky, dying exactly as I have lived: unsuspecting and swallowed up.