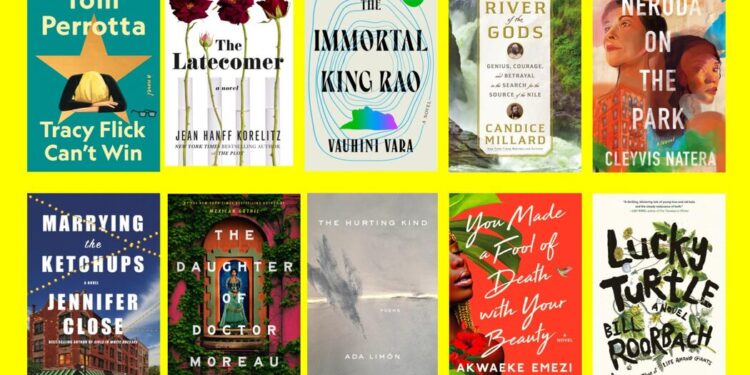 RIVER OF THE GODS: Genius, courage and treachery in the quest for the source of the Nile, by Candice Millard. (Double day, $32.50.) A quick account of the almost absurdly dangerous 19th century quest of two friends turned enemies to solve the geographical enigma of their time. Millard, a gracious writer and careful researcher, shows how their formerly enslaved guide is one of the story’s true heroes. “Millard has earned her legions of admirers,” writes Edward Dolnick in his review. “She knows how to navigate a confused story,” and, he adds, “does everything she can to put her story into context.”

NERUDA ON THE PARK, by Cleyvis Natera. (Ballantine, $28.) In this serious, provocative debut novel, mother and daughter take different approaches to the impending gentrification of their Dominican neighborhood in New York City. “Natera’s style is refreshingly direct and declarative, and at its best this approach feels confident and sharp, a mirror that captures the bleak comedies of life in an endangered community,” writes Mia Alvar in her review. “‘Neruda on the Park’ avoids stark answers, but tenderly and thoughtfully invites readers to weigh our own obligations against the places and people who made us.”

MARRY THE KETCHUPS, by Jennifer Close. (Knopf, $28.) Welcome to Sullivan’s, a family run Chicago bar and restaurant (the Sullivans, of course) where secrets, loyalty, resentment, baseball and beer are part of its DNA. Set in the aftermath of the 2016 election, Close’s propulsive and funny novel shows how politics is always close to home. “This dance between the personal and the political, and the way the latter influences the former, is the most interesting thematic element of the book,” writes Liz Moore in her review. “The Sullivans are trying to keep downtown, but increasingly they find they can’t.”

DOCTOR MOREAU’S DAUGHTER, by Silvia Moreno-Garcia. (Del Rey, $28, will be published July 19.) This enchanting horror novel commemorates HG Wells’ “The Island of Doctor Moreau” on the Yucatán Peninsula. Moreno-Garcia immerses readers in the rich world of 19th-century Mexico, exploring colonialism and resistance in a compulsively readable story of a woman’s coming of age. “Silvia Moreno-Garcia’s imagination is a marvel,” writes Danielle Trussoni in her horror film Summer Reading: “restless and romantic, undaunted in the light of the genre, embracing the polarities of storytelling – the sleek and the bizarre, wild passions and deep hatred – with cool equanimity.”