A small Brontë book, sold for $1.25 million, to return home 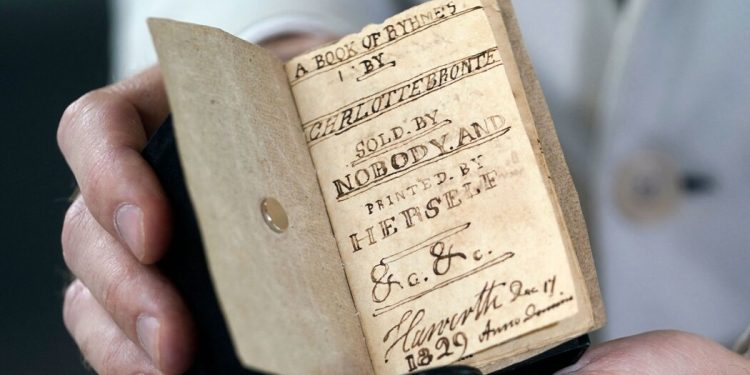 The last of the two dozen miniature books made by the young Charlotte Brontë that have remained in private hands and resurfaced last month after nearly a century will soon be heading to the remote rectory in the moors of northern England where it was made.

“A Book of Rhymes,” which contains 10 previously unpublished poems by 13-year-old Brontë, was a top attraction over the weekend at the New York International Antiquarian Book Fair, where it was offered for $1.25 million. During the preview of the show last Thursday, a red dot indicating it had been sold appeared on the label in the purpose-built display case, sparking speculation about the buyer.

It was revealed Monday that the purchaser is the Friends of the National Libraries, a British charity, who are donating it to the Brontë Parsonage Museum in Haworth, Yorkshire, home to one of the world’s largest collections of Brontë manuscripts.

Ann Dinsdale, the museum’s chief curator, said in a statement she was “absolutely excited” by the turn of events.

“It’s always emotional when an item from the Brontë family is returned home and this last little book returning to where it was written after it was considered lost is very special to us,” she said.

According to a press release, the book will be shown to the public and also digitized, making poems virtually invisible since its writing accessible to readers around the world.

The miniature books and magazines made by the young Charlotte. Emily, Anne and Branwell Brontë in the 1820s had long been a fascination for commoners and deep-seated collectors alike. Originally created to entertain their toy soldiers (and sewn together from sugar packets, shredded wallpaper, and other loose scraps of paper), the small volumes reflected the rich imaginary world they created in the isolation of the family home, leading to novels such as Charlotte’s Jane Eyre and Emily’s Wuthering Heights.

A Book of Rhymes, a volume 15 pages smaller than a playing card making it to 1829, was last seen at auction in 1916 in New York where it sold for $520. After that, it disappeared from view, its whereabouts — and even its survival — unknown.

The titles of the 10 poems in it were mentioned in the 1857 biography of Charlotte Brontë by Elizabeth Gaskell. But the poems themselves have never been published, photographed, transcribed or even summarized, making them the last of her unread poems, according to some scholars.

The news of it’s resurfacing raised fears that the book might disappear into another private collection. Dealers James Cummins Booksellers and Maggs Bros., who sold the book on behalf of an unknown private collector, first offered it to the Friends of National Libraries, giving them several weeks to raise the purchase price. (Functions were raised from more than nine donors, including the Garfield Weston Foundation and the TS Eliot Estate.)

The purchase is just the group’s last dramatic save. Last year it raised $20 million to preserve the Honresfield Library, a famously “lost” library of rare books and manuscripts related to the Brontës, Robert Burns, Walter Scott and others, which was destined for distribution at auction at Sotheby’s.

The items from that treasure will be distributed to a number of libraries and museums, including the Brontë rectory. The rectory already owns nine children’s miniature books, which will soon be added to seven others from the Honresfield Library, in addition to Charlotte’s ‘Book of Rhymes’.

At $1.25 million, the 3.8 x 2.5-inch “Book of Rhymes” inch by inch is “perhaps the most valuable literary manuscript ever sold,” the press release boasted. And the literary quality?

On the back of the title page, Charlotte offered a modest disclaimer: “The following are attempts at rhyming of an inferior nature, it must be acknowledged, but they are my best none the less.”