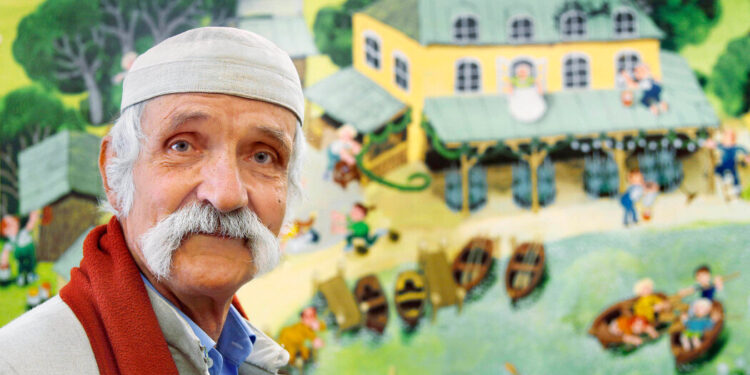 BERLIN — Hippies dance to the Beatles as the downstairs neighbor uses her broom to get them to turn down the music. A few apartments further on, a boy with a bad toothache is waiting for the dentist. The postman has to go up the stairs because the children have taken over the elevator. A married couple has just moved into the flat below that of a man with a broken leg.

For Ali Mitgutsch, who died in Munich on January 10 at the age of 86, all these stories happen on a single page full of pages, each told not with words but with pictures. And such pages filled his children’s books.

They have lined the bookshelves of generations of children in Germany, where he became a household name and where he was celebrated as the father of what the Germans call the “Wimmelbuch” (meaning a swarming book) – books whose detailed drawings of huge groups of people may contain visual jokes and anecdotes.

During his career he drew more than 70 books, puzzles and posters. His books have sold millions of copies and have been translated into 15 languages.

His publisher, Ravensburger, attributed the death to complications from pneumonia.

“We have lost a great person and a great illustrator in Ali Mitgutsch,” Germany’s President Frank-Walter Steinmeier said in a statement. “With his drawings he made us – including myself – laugh, think and dream.”

Mr Mitgutsch was an unknown illustrator when he discovered his trademark concept in 1968. “Rundherum in Meiner Stadt” (“In the Busy City”), his first book in what quickly became a series, featured large scenes – of a city park, a construction site, an apartment building – with countless seemingly unrelated characters going about their daily lives. live a life. The book, which is still in print, won the prestigious German youth book prize, the Deutscher Jugendliteraturpreis, in 1969.

“Brutal, funny and affectionate, he looked at the world and at our human frailties,” said President Steinmeier, who in 2018 awarded Mr Mitgutsch Germany’s highest civilian honor, the Bundesverdienstkreuz.

Mr. Mitgutsch did not like the word ‘Wimmelbuch’, although his publisher used it in the titles of many of his later books. He preferred the term ‘self-telling picture book’. Texts were indeed rare in his books; words were usually only found on characters in an image.

In his 2015 memoir, written with Ingmar Gregorzewski, Mr. Mitgutsch recalls lying awake in bed in the summer during World War II as a child, pricking up his ears and letting his imagination run wild, eager for the bustle of city life. in his working-class neighborhood of Munich. His drawings, made from a bird’s eye view (usually from about the height of his children’s apartment on the third floor), depicted everyday life that was at once all-encompassing and intimate; it reminded some reviewers of the Flemish Renaissance painter Pieter Bruegel.

Alfons Mitgutsch was born on August 21, 1935, the youngest of four children of Ludwig and Pauline Mitgutsch. His father, who was trained as a baker, became a railway worker after wounding his hand in World War I. Ali grew up in relative poverty in an apartment building that had belonged to his maternal grandfather until he had to sell it during Germany’s economic crisis. unrest in the 1920s.

Mr Mitgutsch trained as a commercial illustrator before trying his hand at children’s books in the late 1950s. He published several without much success before reaching the format that would make him famous.

He is survived by his second wife, Heidi, whom he married after the death of his first wife, Karin; three children, Oliver, Florian and Katrin; and four grandchildren. His son Florian is also an illustrator of children’s books.

Mr. Mitgutsch’s childhood memories were not all happy ones. He experienced aerial bombardments on Munich; his older brother Ludwig, a hero to him, was killed while serving with the Wehrmacht in Russia. And Mr. Mitgutsch suffered from severe dyslexia, which caused teachers to abuse him, he said.

“His childhood was always a central theme in his inner life,” said Mr. Gregorzewski. “He’s never been able to let it go completely.”

He added: “His art was his way of calling on other children to come and play, and generations of children have done so.”