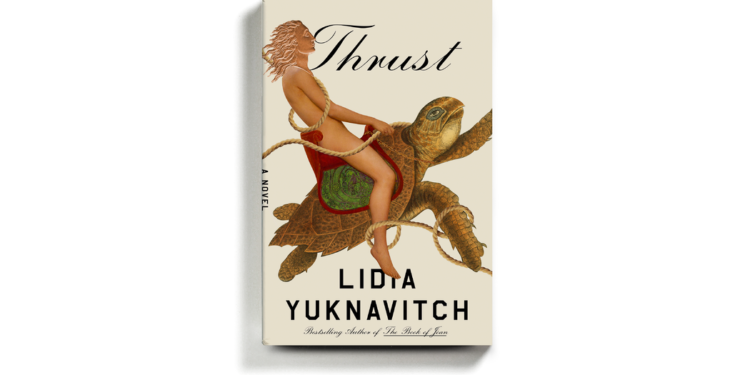 Just like in “Alice in Wonderland” or an old-fashioned Disney cartoon, things brighten up considerably in Lidia Yuknavitch’s deliberately difficult new novel, “Thrust”, when the animals talk.

Their conversation, with a young girl who moves Alice-like through a series of strange mirror worlds, is surprising, hilarious and a justifiable reward for us arrogant people and our systems. “The whole concept of evil…what the hell is that all about?” asks a box turtle Bertrand. (In the film version, he would be played by Wallace Shawn.) “This divine thing is absurd,” he says later. “You’re all confused there.”

Earthworms and fungi confer with the girl disapprovingly, as in a dark version of ‘Fantasia’. “My God, your ignorance of the flora and fauna of the Amazon – staggering,” mocks a mycelium. (Despite his atheism, Bertrand will also throw off a scornful “my god.”) There’s “a little chorus of worm laughter,” worse than any vile clique in the high school cafeteria. Thank the goddess for the helpful motherly whale who asks, “Do you have a name, honey?”

The girl’s name is Laisve, which means ‘freedom’ in Lithuanian, and she is a central character – although not the central character – of “Thrust”, whose vast, fragmented structure questions the centrality itself (as well as liberté, égalité and, above all, fraternité). Another important figure is the Statue of Liberty, built by an ‘ocean of workers’, one of whom sadly watches a suffragist spit in the face because women don’t yet have the right to vote. Another example is the statue’s real-life designer, Frédéric Auguste Bartholdi, who, according to Yuknavitch, is locked in a sadomasochistic affair with a fictional older cousin, Aurora Boréales. In one of their tamer pieces of correspondence, he describes creating a “threesome-facilitating chair” with adjustable holsters for the legs and derrière.

Such liberties won’t surprise those familiar with the author’s work, which tends to rip established history apart and restore it in wacky quilting patterns, and to hell with hanging threads. In “The Book of Joan” (2017), Yuknavitch plans Joan of Arc in a dystopian future. In “Dora: A Headcase” (2012), she moved one of Freud’s best-known study subjects to Seattle and outfitted her with a Dora the Explorer backpack. Yuknavitch’s own memoir, “The Chronology of Water” (2011), is certainly not chronological in the usual sense, imparting mystical, perhaps even magical, powers to the watery. Just like “Thrust,” whose sensitive attunement to marine ecosystems made me look at my bathtub sea sponge with new eyes. (Maybe it was looking back?)

The book loops a few centuries, from Lady Liberty’s conception and construction in the 1880s to 2085 and beyond, when, as in “The Day After Tomorrow” and at least one other disaster movie, the statue is submerged by rising seas. At least the rent isn’t too damn high: the area formerly known as Brooklyn is now called The Brook, with medieval-sounding regions called Rinnegackonck and Werpos. (Gowanus, known today for its channel of toxic sludge, somehow survived.)

Businesses have collapsed and the economy has gone underground. Terrifying raids could be taking place at any time, with “armed men in vans writhing through the streets like killer whales, taking people to god knows where.” Laisve’s mother has died, her little brother has been kidnapped and her father, Aster, has epilepsy and, understandably, mental health issues. Objects float through time, space and sometimes understanding: a penny (the taste of copper always twinned with blood); an umbilical cord; an Apple. Laisve is a “carrier”, transferring them from one institution to another.

We meet and empathize with Mikael, a teen in a detention center who has insider knowledge of the Oklahoma City bombing in 1995. But in a sour twist of the “women and children first” maritime custom, they are the main drivers of “Thrust” . (In a recent interview, Yuknavitch talked about trying to rid the word of its phallocentric connotations.) Aurora, who loses her own leg – don’t worry, Frédéric delivers a well-researched prosthesis, hand-painting the red toenails – has a room to educate those mutilated by underage labor. (She also maintains a “Room of Kneelings” for adult pursuits.)

The story is teeming with fear of these “little ghosts,” such as a girl with a disfiguring necrosis called “phossy jaw” from working around phosphorus at a match factory. “The sunk costs of mechanizing America, creating the fiction of freedom,” explains Aurora, “included cutting the bodies of women and children.” Some of these passages feel preachy, as if they belong in The Nation better than in a novel. Laisve is also the name of a defunct radical political newspaper – so perhaps a bearer of ideas.

Contempt for the cruelty and selfishness of humanity flows from “Thrust”. “The thing with mycelia was that they stick together,” Mikael says, recounting his bleak childhood to a social worker in — what else? – “waves.” “As it went with humans, it’s mostly individual flesh sacks that possess and devour everything in their path, and you never know when their guts will come out.”

It’s hard to turn against the critical tide here – Yuknavitch evokes rapture in many readers – but also hard to get a grip on characters so obviously charged, heavily significant larger than themselves. “Thrust” is an outrageous and impressive novel, but only an enjoyable one at times, and perhaps that’s exactly the point. Some will fling it around the room unfinished. Others will enjoy the elaborately orchestrated punishments.