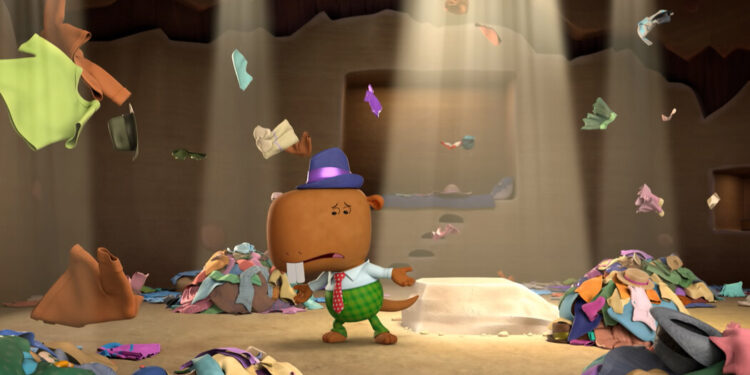 Mo Willems’ picture books often feature devoted mavericks – not the human species, but the animal variety. Over the past two decades, he’s invented a pigeon determined to drive a bus, a pig that wants to fly, and a cookie-baking dinosaur that doesn’t care that she’s extinct. Now one of Willem’s most gentle adventurous creatures is about to throw off his inhibitions on television.

That intrepid soul is Wilbur, the main character of “Naked Mole Rat Gets Dressed: The Underground Rock Experience,” a special beginning to stream on HBO Max Thursday. (It will air on Cartoon Network next year.) This family rock opera animated comedy revolves around Wilbur’s discovery of tiny items of clothing that float down from the sky like manna—or rather menswear—and the scandal that follows his rapid evolution from naked mole rat to natty drying rack.

The television special adapts not only Willems’ 2009 bestseller ‘Naked Mole Rat Gets Dressed’, but also ‘Naked Mole Rat Gets Dressed: The Rock Experience’, a musical version that debuted in 2018 and is still running in theaters. But in any form of entertainment, this eccentric species, whose hairlessness is just one of its unusual traits, needn’t worry about competing on the same theme.

“It’s the same with a pigeon,” Willems, who lives in Northampton, Massachusetts, said in a telephone interview. “Nobody wants to make a book about a dirty city bird. So that area is yours, right? Everyone is doing messy bunnies and happy bears.”

So, he added, “I love the idea that it’s so outrageous it becomes sublime.”

Starting out as an Emmy-winning writer and animator for “Sesame Street,” Willems, 54, is now one of the most acclaimed children’s authors and illustrators of his generation, with his papers filed at Yale and two solo museum retrospectives to his credit. Admirers compare him to titans like Dr. Seuss and Willems’ own idol, Charles M. Schulz. (Willems drew “Naked Mole Rat Gets Dressed” with a nib from one of Schulz’s pens, given to him by the cartoonist’s widow, Jeannie Schulz.)

In Willems’ work, “you have the sweetness of Fred Rogers and you have the hilarity of Dr. Seuss,” said Amy Friedman, chief of programming for Cartoon Network and HBO Max Kids & Family, in a telephone interview. But, she added: “He doesn’t have to be someone else. He’s just Mo.”

Friedman’s team wanted to embrace that unique vision when it approached Willems about working together. Although HBO Max already streams short films based on Willems’ work and “Don’t Let the Pigeon Do Storytime!”, a live-action sketch comedy special, “Naked Mole Rat” is both their first creative collaboration and the first animated television production of one hour. that inspired one of his books.

As Willems explained, “Naked Mole Rat” explores themes — self-acceptance, tolerance, celebrating the passions of others — directly related to his own experience, both as a cartoon-obsessed child of Dutch immigrants and as a parent of a 21-year-old year-old son, Trix, who is transgender. This isn’t, he emphasized, “a coming-out story” — although Wilbur shocks his colleagues by revealing his fashion-forward desires — but an “acceptance-in story,” he said.

“The people around Wilbur, the mole rats around Wilbur, have to do the work,” Willems said. In the TV special, the plot is as much about how Wilbur’s closest friends – they’re in a band with him called the Mole-ing Stones – grapple with Wilbur’s new identity as he is with his own self-discovery.

And struggle they do, at peak volume and emotion. Anyone familiar with children’s television knows that a rock opera is about as common as a naked mole rat in a purple tuxedo. But Deborah Wicks La Puma, the composer of “Naked Mole Rat” – the stage and TV versions have the same songs – shares Willems’ enthusiasm for full, arena-like, headbanging tunes.

The story “is a bit subversive,” La Puma said in a phone call. And rock, she added, is “just a little bit edgy, but totally fun and full of energy.”

This energy fills the television edit, which uses new arrangements, background music (by composer Keith Horn), more musicians and a cast with a vocal range “which allowed us to make the music more intense,” Willems said.

That intensity is also in the humor. Jordan Fisher, an alumnus of the Broadway cast of “Hamilton” and “Dear Evan Hansen,” who plays Wilbur, said he used the lilting voice patterns of a family friend’s 11-year-old to develop Wilbur’s speech, which is “a little affable and mad,” Fisher noted. But when this almost cherubic cartoon rat sings, he added, it’s as if “Aerosmith is seeping out.”

Willems, who wrote all the stage and TV lyrics, acknowledges that young viewers will not be familiar with bands like Aerosmith or the other musical numbers influences, including the Who, Heart, Pink Floyd, Jimi Hendrix, David Bowie and Queen. But that doesn’t bother the makers of the shows.

“One of the things we talked about,” said La Puma, was, “How can this be a fun rock primer for kids?”

The TV special can also serve as an entertaining introduction to art history. In one scene, Wilbur’s bandmates drag him to the Moleseum of Art, a huge Met-esque institution, to prove that no self-respecting mole rat has ever worn clothes. Here a series of masterpieces, including the ‘Birth of Venus’ by the Mona Lisa and Botticelli, all with naked mole rats as their subject, come to life digitally to express their dismay.

The idea was, “How do we turn these songs into music videos?” said the animator, writer and producer known professionally as Mr. Warburton. (Tom enjoys the formal title privately because, he said on the phone, “it sounds so official, and I’m not so official.”) With actors on stage, he added, visual options are limited, but in an animated music video, the sartorial inexperienced Wilbur can sing and dance while first donning a back-front button-up shirt and a lilac-colored fedora upside down.

Mr. Warburton, who co-wrote the TV script with Willems and, like him, is executive producer of the special, also collaborated with Oddbot Animation to create a massive computer-generated subterranean colony of three-dimensional mole rats – this after all, is the “Underground Rock Experience” and not just “the Rock Experience” – which still resemble the creatures in Willems’ original drawings.

“We wanted them to look like little dolls,” said Mr. Warburton. While computer-generated images often appear “super smooth,” he added, the digital effects here are almost like those of stop-motion animation.

In translating the original material to television, the long-time friends also made a scientific correction: Mole-rat society is now matriarchal, run not by a grandfather but by a grandmother, voiced by the venerable actress Carol Kane. . They’ve also answered a long-standing question: What’s the source of that floating fashion that excites Wilbur so much? (The answer is a spoiler, so no clues here.)

Perhaps most importantly, though, they’ve given the project enough sophistication — it has a running joke about oxymorons — to make it a viewing experience for all ages, even as it premieres as part of Cartoonito, HBO Max, and Cartoon Network’s preschool. programming block.

Willems said he hoped it would not only inspire family dances, but also family conversations about art, music and identity. “I’d love it if this special got kids to see and act on themselves differently,” he said.

“Whatever that is, ‘I like to draw’, ‘I like to dress,’ ‘I like to dance,'” he continued. “To be able to take what their definition was that they had before,” and, he said, “to add a new one, an exciting new piece of who they are.”