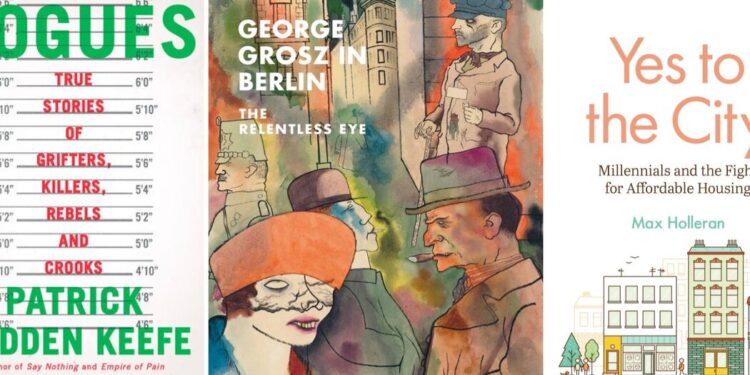 Affinities: A Journey Through Public Domain Images Review, by Adam Green. (Thames & Hudson, $60.) The editor of The Public Domain Review, an online magazine that highlights works outside of copyright, has collected more than 500 prints, paintings, photographs, sketches, and more into a single, uninterrupted, dreamy series.

GEORGE GROSZ IN BERLIN: The ruthless eye, by Sabine Rewald. (Metropolitan Museum of Art, $45.) This examination of the German Expressionist’s work, including both famous and rarely printed paintings and drawings, re-evaluates Grosz’s years in Berlin and highlights his skill at depicting moral decay. of the interwar period.

WHEN TIME IS SHORT: Finding our way in the Anthropocene, by Timothy Beal. (Beacon, $23.95.) In light of the impending climate collapse, a religious scholar offers new readings of biblical texts that challenge human singularity and offer a conception of human life as interdependent on the natural world.

YES TO THE CITY: Millennials and the Struggle for Affordable Housing, by Max Holleran. (Princeton University, $27.95.) An urban studies researcher describes the rise of the “Yes in My Backyard” movement, which includes activists, developers, and advocates seeking a new kind of urban society through of densely populated structures in cities.

ROGUES: True Stories of Scammers, Assassins, Rebels and Scammers, by Patrick Radden Keefe. (Doubleday, $30.) Twelve stories of “crime and corruption, secrets and lies, the permeable membrane that separates legal and illegal worlds” by the New Yorker staff writer and author of “Empire of Pain.”

ONE PERSON, ONE VOICE: A Surprising History of Gerrymandering in America, by Nick Seabrook. (Pantheon, $30.) This comprehensive history traces the practice of gerrymandering from its beginnings in 13th-century England to its ubiquitous use in 19th-century America and its highly partisan contemporary iteration.