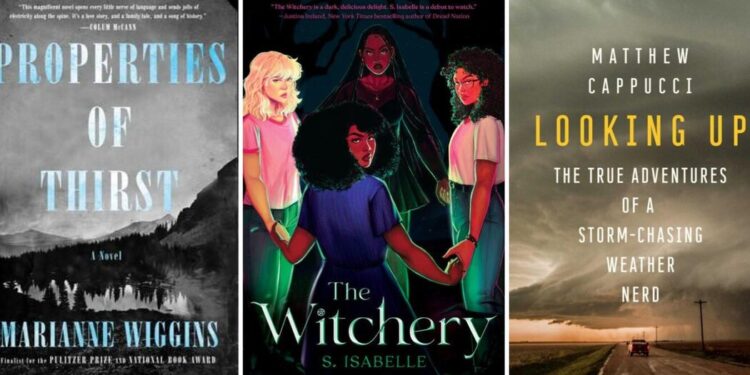 VIOLET OF THORNS, by Gina Chen. (Delacorte, $18.99, aged 14 and over.) A teenage witch lies about a prophecy and activates an impending curse on the prince of her kingdom, who is both her enemy and the person she falls in love with.

BOYS I KNOW, by Anna Grace. (Peachtree Teen, $17.99, ages 14 and up.) An Asian-American teen juggles school, family expectations, and relationships in this complex coming-of-age tale of identity and sexuality.

LOVE TIMES INFINITY, by Lane Clarke. (Poppy, $17.99, aged 14 and over.) Clarke’s debut novel follows a high school student recovering from a traumatic past, while also enrolling in the college of her dreams, navigating new love, and finding out how many of her estranged family she wants to let it back into her life.

THE WAKERY, by S. Isabelle. (Scholastic, $18.99, ages 14 and up.) In this multi-perspective fantasy, an apprentice witch is invited to join a powerful group of young witches, each with different powers and pasts, and together they attempt a curse that plagues their city.

PROPERTIES OF THIRST, by Marianne Wiggins. (Simon & Schuster, $28.) This riveting novel set during World War II follows Rockwell “Rocky” Rhodes, a scion of old money turned California rancher, as he tries to protect his family and landscape from the degradation of America at war.

ON CRITICAL RACE THEORY: Why it matters and why you should be concerned, by Victor Ray. (Random House, $26.) A sociologist traces the history of critical race theory, outlines racism as “a fundamental organizing principle in America’s political history” and argues that racial progress in the United States has generally been achieved when a critical mass has taken advantage of white people.

A BEAT BEYOND: Selected prose by Major Jackson, edited by Amor Kohli. (University of Michigan, paper, $19.95.) The acclaimed poet explores the intellectual and spiritual elements of poetry and the social function of art through essays, interviews, and notes.

LOOK UP: The true adventures of a storm-chasing weather nerd, by Matthew Cappucci. (Pegasus, $27.95.) A meteorologist recounts a life he spent chasing the weather, from the “rare, beautiful moments” that storms create to the increasing severity of climate change.