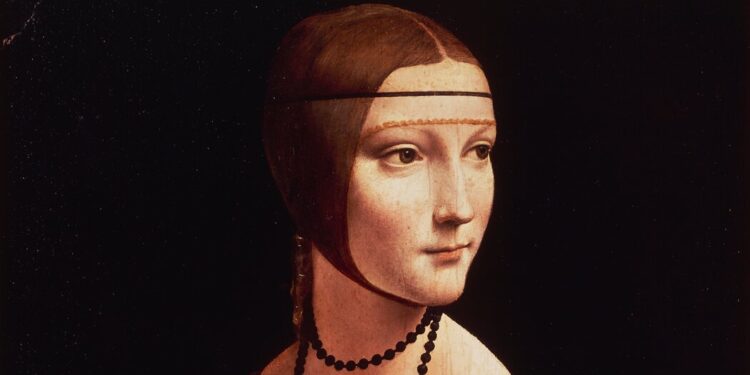 WHAT THE ERMINE SAW: The extraordinary journey of Leonardo da Vinci’s most mysterious portrait, by Eden Collinsworth

A self-assured teen stares out of the velvety depths of Leonardo da Vinci’s portrait, her face luminous and unfathomable. Her name is almost certainly Cecilia Gallerani, but she is better known as the ‘Lady With an Ermine’, so named for the lithe white creature on her lap. This small, perfect 1490 canvas, one of only four known portraits painted by Leonardo of women, has been prized by collectors for centuries – and has been swept away by the transformations of European history.

Eden Collinsworth’s fourth book, “What the Hermine Saw: The Extraordinary Journey of Leonardo da Vinci’s Most Mysterious Portrait,” traces the tumultuous history of Leonardo’s painting, from Sforza’s Renaissance court to Enlightenment-era Poland to the theft of the portrait by Nazi looters during World War II. With dizzying effect at times, Collinsworth—a former Hearst executive and now a think tank chief of staff—jumps between gritty detail and grand context. “What the Ermine Saw” has swept through wars and empires, art-building and state-building across the continent over the past 500 years.

The story is interrupted at moments when the painting is lost to history. “Lady With an Ermine” disappeared more than two centuries after Gallerani’s death, only to reappear around 1800, when Polish prince Adam Jerzy Czartoryski bought it while touring Napoleonic Italy; he gave the portrait to his mother, Princess Izabela Dorota Czartoryska.

Princess Izabela is the grand reveal of Collinsworth’s twisting story. She was a master politician and diplomat, but also a devoted Polish nationalist and heroine of the Enlightenment: born in 1746, she counted Benjamin Franklin and Voltaire among her admirers. She wore the uniform of her husband’s regiment during her honeymoon and traveled freely through Europe as a man.

When Poland was annexed by Russia at the end of the 18th century, Izabela devoted her energies to perpetuating Polish culture. In Pulawy, she built a museum to house her most prized treasures, alongside other European relics such as chairs that belonged to Shakespeare and Rousseau, and the ashes of El Cid. After Tsar Nicholas I crushed what remained of Polish autonomy in 1830, the Czartoryski family moved “Lady With an Ermine” to Paris for safekeeping, at the Hôtel Lambert, a center for exiled Polish artists and intellectuals.

The painting’s fate was particularly precarious during World War II, as it was highly coveted by Nazi art thieves. These include Hitler himself, whose “art envoy” Hans Posse tried to seize “Lady with an ermine” in front of the planned Führermuseum in Austria. Bundled up in a pillowcase by a housekeeper at the Czartoryski family estate in eastern Poland, the painting was eventually found by the Gestapo. Hans Frank, the governor general who oversaw the genocide of the Polish Jews, showed “Lady With an Ermine” at his summer villa in Bavaria.

When Frank was arrested by American troops in 1945, the painting was recovered and returned to Krakow. The magnitude and subsequent return of the Nazi art thefts make for a compelling narrative, and Collinsworth broadens her focus to tell compelling stories of heroic curators and art historians who painstakingly reassembled Europe’s post-war cultural heritage.

A famous photo documents the moment when the Monuments Men, who helped salvage “Lady With an Ermine” from the Allies, handed it over to Polish art historian Karol Estreicher. In that image, Cecilia Gallerani stares boldly past the cannons and the dust and noise of Krakow’s train station, her eyes a silent witness to Europe’s most important cultural achievements and its darkest atrocities.

WHAT THE ERMINE SAW: The extraordinary journey of Leonardo da Vinci’s most mysterious portrait, by Eden Collinsworth | 253 pp. | Double day | $27

Erin Maglaque is the author of ‘Venice’s Intimate Empire’.