Paradise by the Patchogue Ferry: One Hundred Years on Fire Island 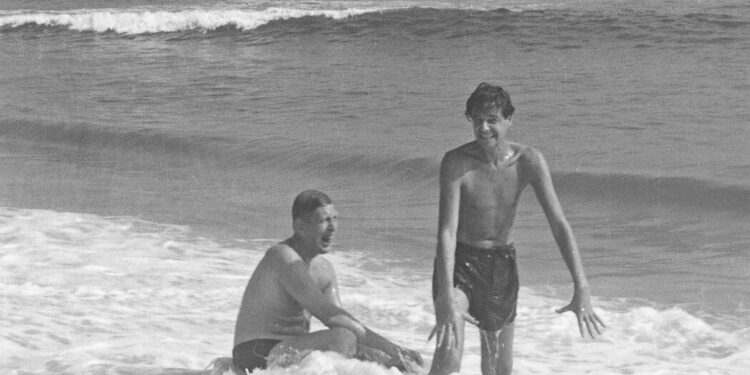 FIRE ISLAND: A Century in the Life of an American Paradiseby Jack Parlett

The few times I visited Fire Island – bespectacled and pale – I felt out of place. The poet Jack Parlett, who describes himself as an ‘otter’ or perhaps a ‘bear in training’, and who also has mixed feelings about paradise, harbors his ambivalence and makes good literature out of it. His concise, carefully researched, age-old chronicle of gay life on Fire Island captures, with a clear yet lyrical touch, the power of the place to numb and shame, to give pleasure and to symbolize transience.

Fire Island, a 9-mile barrier island off the south coast of Long Island, less than a two-hour drive from Manhattan, can claim centuries of Indigenous habitation and “about seventeen distinct vacation communities,” including Cherry Grove and the Pines, home to the queer conspiracy thickens. “Wallflower Sensibility” empowers Parlett to be a skeptical but definitive narrator of Fire Island’s carnival, a diorama he embellishes with autobiographical asides: “Ever since I came to know myself as a gay man, I made the unconscious assumption that my own heavy drinking habits were linked to my sexuality.” Quick personal vistas turn his book into a hybrid act, a place-based memoir that traces the evolution of a community animated by sexual arrangements.

Parlett is no more optimistic than I am about the possibilities of intercourse, as much as we yearn for it, but the book’s most practical aperçu comes when he shares the advice of a therapist: “If you walk past another gay person on the street, give she then smiles.” Parlett explains, “The queer community has historically been adept at perpetuating such transient glances.” To honor the eternal afterlife of cruising, smile at a stranger today. Extend your gaze for another three seconds. See what happens next.

The Lasting Legacy of Andy Warhol

The artist’s cultural fame has hardly waned in the decades since his death in 1987.

Parlett entertains us with a shopping list of walk-ons, cameo players in psycho-epic sword-and-sandal† Walt Whitman saw a “wild sea storm” on Fire Island. Claude Lévi-Strauss called it a place of “gay farce”. James Baldwin (who once wrote, “I don’t like bohemians, or bohemians, I don’t like people whose main purpose is fun”) worked on a concept of “Another Country” on Fire Island, where Janet Flanner, Patricia Highsmith and Carson McCullers loved seedy court. Andy Warhol filmed “My Hustler” on the beach, where Derek Jarman later made a moody, prismatic Super 8 movie. Liza Minnelli paid a ‘pope visit’ to Fire Island in 2012. I wish I had gone there to receive anointing.