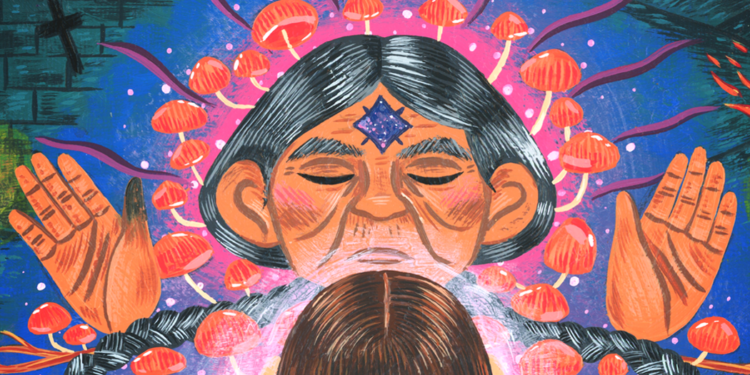 WITCH, by means of Brenda Lozano | Translated by Heather Cleary

In the 1960s, ceremonies led by María Sabina Magdalena García, a Mazatec healer in Oaxaca who worked with psilocybin mushrooms, became so famous that they began to attract foreigners. Bob Dylan and Keith Richards would be her visitors. The arrival of so many invaders to the healer’s village caught the attention of Mexican police, who suspected her of dealing drugs. She was ostracized by her community and her house burned down.

Many North Americans heard of her from the ethnomycologist R. Gordon Wasson, who published a first-person account of her ceremonies in 1957 entitled “Seeking the Magic Mushroom,” in Life magazine. Wasson’s trip was funded by MK-Ultra, the CIA’s program to research mind-altering drugs for possible use in interrogations. He gave the healer a pseudonym, but printed her photo without permission, and her real name appeared in a book he published that same year.

Brenda Lozano doesn’t mention Magdalena García in her novel “Witches,” but according to a note by a translator from Heather Cleary in the English-language edition, Lozano was inspired by the woman’s life. The note does not address the issues of consent and ethical research raised by the magazine story, nor does the novel. Cleary’s point is that Mexican readers will probably understand the reference. (A very different novel, “Carne de Dios”, by Homero Aridjis, has a more biographical approach.)

The book is beautifully translated. Cleary leaves with word and deed in Spanish terms like curandera, the feminine form of healer, and the less prestigious bruja, or witch. “A bruja can literally act in spells, but the term can also be used figuratively to dismiss a woman as a nag,” she writes. “On the other hand, a woman with a highly developed sense of intuition can be called admirably a bruja.”

Lozano’s novel is full of brujas. A young journalist named Zoe, whose mother has a highly developed sense of intuition, travels from Mexico City to rural Oaxaca. Zoe has been commissioned to write an article about the curandera Feliciana (a fictional Magdalena García), whose teacher has just been murdered. The teacher was a mux, another untranslated word referring to a third gender recognized and even celebrated by some indigenous communities in Oaxaca. But the murder was a hate crime committed by a man the teacher had spent the night with.

Feliciana has attracted rich and generous followers from all over the world. She’s not really interested in fame, although fame doesn’t threaten her way of being like it did for the real Magdalena García. Feliciana is only interested in healing people with the mushrooms she calls “children.” As she tells her story, she also pulls Zoe’s out of her. Both have sisters who were violated—in Zoe’s case, their mother’s intuition protected her from worse harm—and fathers who died with unfinished business.

This is Lozano’s third book; she has also published a collection of short stories and the more experimental novel ‘Loop’, her first title to be translated into English. The greatest success of “Witches” is the way she weaves together two different voices – one Spanish-speaking, from the capital, rightly angered by gender violence, and the other disregarding the “language of government” in favor of her own. , explaining matter-of-fact life in rural Mexico. “Kids in our town do whatever they want until they can walk,” Feliciana says, “but once they can stand on their own like little cows, it’s time for them to work.”

Although the book describes violence against women and those who present themselves as women, it emphasizes, in both rural and urban communities, an atmosphere of freedom and mobility that is a joy to read. Both very different women – the curandera and the journalist – have many people in their lives, especially sisters, who heal and support them, even in a hostile world.

Rachel Nolan is an assistant professor at the Pardee School of Global Studies at Boston University.