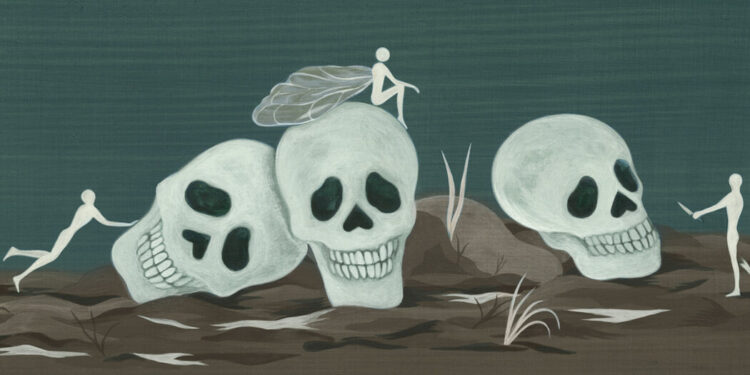 The murders that take place in “Three Assassins” – and there are many – are disarmingly mundane. Kotaro Isaka describes murder as a doctor would do surgery: meticulous, but numbly pragmatic. He fixes himself on the fleshy, tangible process of death, the blood, the saliva, the clatter of the knife tip against bone. The central enigma of the novel, the Pusher, is defined by his method of pushing his victims in front of moving cars and then disappearing, making the scene resemble an accident. But a method quickly becomes a routine, which becomes a straitjacket. And when your clients are a rogue gallery of conspiracy politicians and rich dirtbags, a corporate killer is not far from a corporate vending machine.

This mind-boggling realization haunts Isaka’s three protagonists: the other two killers, Cicada and the whale, as well as Suzuki, the man from the novel, whose quest to avenge his wife’s murder is thwarted when the Pusher catches her killer – the “idiotic son” of a billionaire CEO with a penchant for drunken hit-and-runs – first. Suzuki follows the Pusher, unaware that Cicada and the Whale are also on his tail.

Suzuki, a bumbling former schoolteacher, is a perfect opponent of these trained killers. But Isaka sends them all into the gutter of Tokyo’s impotent criminal underworld. Cicada, who specializes in family murders, lives under the thumb of a dominant handler. Forcing his targets to commit suicide, The Whale is haunted by the ghosts of his former victims. And Suzuki finds it increasingly difficult to justify his amoral actions in the name of revenge he can’t even achieve. All three men have their own reasons for looking for the Pusher, but what really eludes them is a sense of control over their own lives.

Some of these names may sound familiar to readers of Isaka’s “Bullet Train”, which follows a different cast of assassins who perform separate missions on one Shinkansen train, and takes place after the action of “Three Assassins”. With its cavalcade of characters and dense, claustrophobic setting, “Bullet Train” steams on with the frenetic chaos of a Scooby-Doo chase sequence. By contrast, “Three Assassins” is a sparse, sour thriller, whose slow chase spreads across Tokyo, leaving plenty of time for fear. On one lane, the whale — who reads “Crime and Punishment” over and over again — wonders, “Has anyone ever done anything for themselves? Can they even? Once they understand the impossibility of it, they want to die.”

In the delicate balancing act between this heady nihilism and its direct, propulsive plot, Isaka occasionally fiddles. Moments that border on existential revelation (“people just live, without purpose, without destiny. They live as if they were dead”) or bitter political critique (“fascism never resembles fascism”) are hampered by Isaka’s bland prose, and by Sam Malissa’s sometimes too mundane translation (it may be the only time you read that a hit man addresses someone as “my guest”).

The novel is most successful when it combines its depressive elements with the hallucinatory. When Cicada meets the whale, he is consumed with a sudden, supernatural melancholy, “saturated with black liquid” as a “gelatinous sorrow spreads through his chest and then through his head.” Cicada can’t remember anything before meeting his companion and asks out loud, “Do I even exist?” Is there anyone in this creepy novel – riddled with apparitions, made-up songs and movies, and professional actors pretending to be ordinary people? A surreal fable disguised as a crime novel, “Three Assassins” feels like a fever dream that makes sense once you’re in it, but whose strange outlines linger long after you wake up.

Ian Wang is a writer and critic whose work has appeared in The Baffler, Sight & Sound and Hyperallergic.