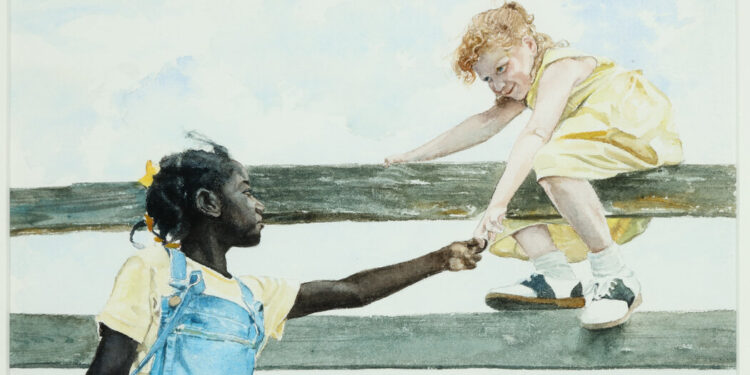 In a green rural setting, a weathered gray fence separates two girls, one black and one white. The black child holds out her hand while the white girl, already straddling the top rail of the gate, reaches down. Although they can hardly keep each other’s fingers, the viewer feels their curiosity, their anticipation, their desire to overcome this barrier.

The scene, a watercolor by E.B. Lewis, is one of the first works visitors encounter in “Picture the Dream: The Story of the Civil Rights Movement Through Children’s Books,” on display at the New-York Historical Society through July 24. . Created for Jacqueline Woodson’s 2001 book ‘The Other Side’, the painting reflects two of the main themes of this exhibition: that progress arises from everyday, individual action as well as from collective effort; and that children, far from being mere witnesses to the civil rights movement, have played a central role in it.

“It was children themselves sitting on the sidewalk and in the street, going to jail, being bitten by dogs, being attacked by billy clubs,” Andrea Davis Pinkney, the exhibit’s curator, said in an interview at the museum. “And that’s happening now. This minute.”

The show, which follows the civil rights movement from segregation to the present, captures those horrific moments, along with interludes of joy. Organized by the Eric Carle Museum of Picture Book Art in Amherst, Massachusetts, and the High Museum of Art in Atlanta, “Picture the Dream” is the first exhibit chronicling this history through children’s literature, Pinkney said. When the show debuted at the High Museum in August 2020, she added, some visitors thought the George Floyd murder and subsequent protests had inspired it. But while “Picture the Dream” was planned much earlier, subsequent events, including the racist massacre in Buffalo last month, have only sharpened its relevance.