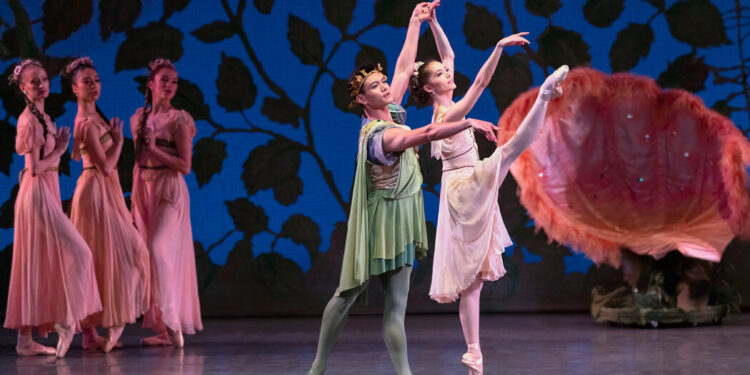 What stood out? What stood still? Who was still there?

The big event of the New York City Ballet’s spring season, the Stravinsky Festival, however packaged and published, was somehow not the most memorable. Something less curated was: modern life. The six-week season, which ended on Sunday, felt huge, a testament to effort, though not the kind that come from sweat. The casting, always complicated with so many moving parts, was made even more difficult by the knock-on effect of Covid and injuries.

Surprising debuts were made (Georgina Pazcoguin as Polyhymnia in “Apollo”) and debuts were lost (Ashley Laracey, alas, as Polyhymnia in “Apollo”). As Pazcoguin wrote on Instagram prior to her performances: “Wild times. I send love to my colleagues who have prepared this role and cannot take the stage for various reasons. I’ll try to make you proud.”

That bumpy, landslide feeling never really stopped. Cast changes were so common that even on the morning of a show, you didn’t always know who was performing that night. Early on, one of the company’s reigning directors, Sara Mearns, suffered an injury and then contracted Covid-19. (And judging by her posts on Instagram, she wasn’t asymptomatic.) Other veteran directors, including Ashley Bouder and Megan Fairchild, were missing all or much of the season.

And eight days before his scheduled farewell performance, Amar Ramasar suffered an injury while performing on Jerome Robbins’ Four Seasons.

But your heart really had to go out to Laracey, who, after starring in “Symphony in Three Movements” and “Stravinsky Violin Concerto,” tested positive for the coronavirus and was forced out of both “Orpheus” and “Apollo.”

Laracey, who has been a soloist since 2013, is in her 20th year with City Ballet. It is doubtful if she will be promoted to director, as she herself said in a recent interview in WWD. While she may not be the strongest dancer in the company, she’s got that witchy weird thing down. I was curious what she would think of her part in “Orpheus” (1948), a ballet that still feels inert – the rare Balanchine work that seems dated. She brings an otherworldly quality to just about everything she dances.

My biggest disappointment this season? I was traveling and missed the premiere of Pam Tanowitz’s new Law of Mosaics. By the time I got back it had been canceled altogether, again a result of illness and injury.

On Sunday, the season concluded with Ramasar’s farewell performance, the luminous Divertissement pas de deux in Balanchine’s “A Midsummer Night’s Dream” opposite Sterling Hyltin. Due to his injury – a partial tear in his quadriceps tendon – he shared the part with Andrew Veyette, a fellow director who filled in for the more virtuoso choreography.

It’s no secret that Ramasar has had some rough years. In 2018, he and two other male dancers became entangled in a texting and photo-sharing scandal; he was fired from the company and then reinstated after an arbitrator’s ruling. His performances since his return have not always been easy to watch; he pulled me out of the dance. And lately he seemed to waver between two general moods: brash or humble.

On Sunday, he chose humility for the performance; the arches were something else entirely. He jumped off the stage and waded through the crowd looking for a hug. His destination was a surprise: Peter Martins, former artistic director of City Ballet, who retired in 2018 amid allegations of sexual harassment and physical and verbal abuse. (Martins denied the allegations.) Another dancer in the photo-sharing scandal, Zachary Catazaro, was among those who wished Ramasar the best on stage. The entire crowd roared in approval, as if the past few years had never happened.

Yet there was so much good about City Ballet this season – the parts that had to do with current events ballet. And although it was six long weeks, there was also room for a new generation to perform large parts. The week of “Midsummer Night’s Dream” performances closed the season on a high; this richly detailed ballet from 1962 could have been choreographed yesterday. It is the rare story ballet with exuberant choreography and topical humour.

Jovani Furlan, who took over Ramasar’s role in the Divertissement after his injury, captured the seamless flow of the choreography in both his attentive, romantic partnering and his noble dance. He was also excellent in the Sarabande section of Balanchine’s “Agon”. But his presence is worth more than any role or show: it reminds us that a new generation is coming to City Ballet, and it’s amazing.

That word best sums up Indiana Woodward, who shone all season long with more than just her usual youthful verve and enthusiasm – witnessing her ever-increasing depth was a joy. In the Divertissement, she had a wistful blend of discernment and splendor as she danced with Veyette, a veteran who looks better than he’s done in years. Woodward is the name you hope to see in every show; her musicianship lit up Robbins’ “Piano Pieces” and “Four Seasons,” which formed one of the season’s finest programs.

Oddly enough, though the season was dominated by the Stravinsky Festival – a selection of many of Balanchine’s most in-depth ballets, celebrating the 50th anniversary of a historic festival – what stuck out were performances of some of Robbins’ rarely seen works. : Along with “Piano Pieces”, there was the lavish “Goldberg Variations” at the start of the season.

Beautifully staged, full of subtlety and richness, these ballets brought out expansive qualities in dancers: Unity Phelan, in the June Barcarolle of “Piano Pieces”, was elastic and otherworldly, dancing in another realm; Anthony Huxley and Roman Mejia, alternating in the same ballet, showed how two approaches – one meticulous, the other bold and daring – could both shine. And speaking of radiance, Phelan, in her debut as Titania in “Midsummer,” almost glowed.

At the Stravinsky Festival, there were also glorious debuts – most notably Isabella LaFreniere in “Firebird,” a highly anticipated, glowing performance that used every corner of her long body. Her jump was something fantastic, like an example of courage; her outstretched arms and back were full breadth. But LaFreniere’s imagination, appealingly vibrant, seems to be the spark that takes her technique to the next level, especially in parts like Firebird, the queen in “The Cage” and Helena in “Midsummer.” In the right role, her dance is an emotional response to music. She’s the kind of soulful, independent dancer who evokes the spirit of the great Kyra Nichols.

But so many dancers are flourishing now. Mira Nadon, Emilie Gerrity and Mejia look ripe for promotion; and the promotion to director of Chun Wai Chan – a noble, generous presence in every role I’ve seen him dance – must be a good sign. Farewell is not just for farewell, but for a new beginning, a fresh start for a new generation led by dancers like Chan, Furlan, Woodward and many more. What has spring shown us? That talent flows through the ranks. The proof was on the podium.