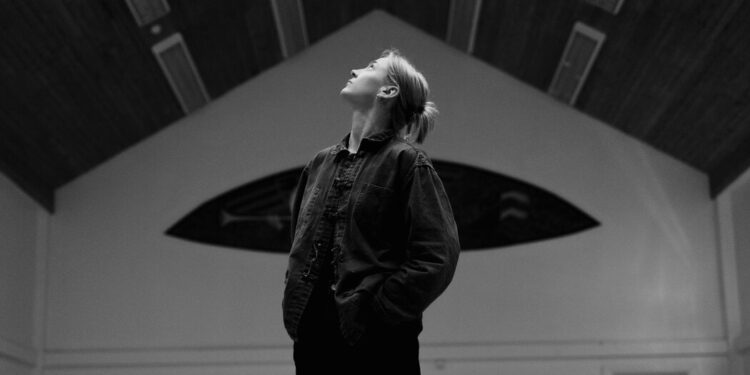 “Push!” screamed choreographer Oona Doherty, as a group of young women sprinted in a circle to a propulsive drum beat. It was a chilly night at the Gibney dance studios near Union Square, with the windows wide open to improve ventilation, a safety measure in the midst of the Omicron wave.

But the cold didn’t seem to bother the dancers, who were in the third hour of a sweaty rehearsal. They slowed down, cringed, then released a sharp, confrontational unison phrase, full of arms clapping, feet stamping and hands slapping their thighs.

“Well done, well done,” Doherty said when they were done. “You kill it!”

The dancers learned one of four short episodes of Doherty’s “Hard to Be Soft – A Belfast Prayer,” a work inspired by the city she grew up in in the wake of the 30-year conflict known as the Troubles. In this section, she recruits for a group she calls the Sugar Army performers (mostly teens) from wherever she tours—in New York, alumni of the Young Dancemakers Company, a summer program for public high school students.

“That woman is a blast,” said Kiana King, 22, after her second rehearsal with Doherty. “She really makes me want to do more, work more and more of myself as an artist.”

A rising star of contemporary dance in Europe, Doherty, 36, is still a newcomer to the American stages. She’s only brought a full-length work to this side of the Atlantic once before, “Hope Hunt and the Ascension into Lazarus,” a daring solo that begins with the protagonist tumbling from the trunk of a car, which she performed on the 92nd Street Y in March 2020.

Now ‘Hard to Be Soft’, which has toured extensively since its premiere in 2017 – most recently to the Venice Biennale, where Doherty won the Silver Lion in 2021 – is poised to make its US debut. Barring Covid-related disruptions, it will take place January 13-23 at the Irish Arts Center in Manhattan as part of the inaugural season at the institution’s new building.

Rachael Gilkey, the Centre’s Director of Programming and Education, first took notice of Doherty at the 2016 Dublin Fringe Festival in an early performance of “Hope Hunt”. “She immediately stood out as a performer and choreographer you couldn’t take your eyes off of,” Gilkey said.

While Doherty’s latest work, Lady Magma, is a bacchanalian exploration of female sexuality, she is best known for her nuanced portrayal of a sort of hardened working-class masculinity. In two solos that book “Hard to Be Soft,” she takes on the style and mannerisms of men from the streets of her hometown — “young guys, in their tracksuits, basically,” she said in a video interview of the seaside town of Bangor. near Belfast, where she now lives and works. (She uses a local church, rent-free, as her studio.)

Through an erratic movement that sometimes suggests a body is at war with itself, Doherty reveals a brokenness – and, though more elusive, an almost sublime levity – beneath her characters’ aggressive demeanor. In the haunting score, by acclaimed Belfast DJ David Holmes, what sounds like sacred choral music mingles with thrashing voices providing fragments of a story.

Seeing Doherty in this role might confuse the performer with the archetypes she embodies; her conviction is so complete, a form of faith. “I wanted it all to be a physical prayer,” she said. “It was an attempt at a cure.”

Born in North London to Northern Ireland parents who left amid the violence of the 1970s, Doherty returned to Belfast with them when she was about 10. “I went to a very big Catholic girls’ school,” she said, “it stays with you a bit, because girls can be mean.” Memories of her classmates gave rise in part to her vision of the Sugar Army as a rebellious group of young women.

Doherty struggled at the academic level but discovered “the only thing I was good at,” she said in her school’s contemporary dance program. Described as a “dweeb” in her early teens, she entered a more rebellious phase as a student at London Contemporary Dance School. (She was kicked out after a year, which she now sums up as “a shaky one” in her career.)

After receiving degrees from Ulster University and Trinity Laban Conservatory of Music and Dance, Doherty worked with Trash, a punk-influenced performance group in the Netherlands. The directors, Kristel van Issum and Guilherme Miotto, “taught me everything I know,” she said. But the work became too exhausting. “It sounds awful, but it’s true — they were interested in seeing people in a state of exhaustion, so we were all very thin and very tired.”

Doherty returned to Northern Ireland after four years with Trash and shifted her focus to her own choreography. (She also attracted attention as a performer with Irish dance-theatre artist Emma Martin.) She locates the beginnings of “Hard to Be Soft” during that period of adaptation. “If you’ve been away from home and you come back, you see it differently,” she said.

When discussing her work, Doherty rarely refers to specific religious or political affiliations, but rather to a collective trauma passed down from generation to generation. After going through the trouble, she said, people of her parents’ generation have “good reason to build a lot of walls.” With “Hard to Be Soft,” she was trying to “really understand the full extent of pain and dance with love,” she said. “You’re not an angry man on stage. It’s more than that. You play someone in pain, who can’t handle that amount of pain, so it comes out in anger.”

In the show’s third episode, titled “Meat Kaleidoscope,” two men trudge toward each other and lock themselves in a long, struggling embrace. “Do we hug because we support each other or because we try to strangle each other?” said choreographer John Scott, who performs the duet with Sam Finnegan. “I think it can resonate with a lot of different communities about community and family divisions.”

Doherty was also interested in how certain types of work affect the body and the psyche. Her father, uncles and grandfather all worked at the Harland and Wolff shipyard, where the Titanic was built – an anchor of Belfast’s economy. “The kind of work you do already builds a certain character,” she said. “There’s a certain weight in that amount of metal around you.”

Dance scholar Aoife McGrath, senior lecturer at Queen’s University in Belfast, has followed Doherty’s work and collaborated with her on a book to accompany ‘Lady Magma’. In “Hard to Be Soft,” McGrath said, she sees Doherty’s dual perspective as a Belfast insider and an outsider, who has “the embodied knowledge to grow up in that landscape” and a keen eye outward.

“It’s that fascinating duality of experience that I think helps audiences connect with her work,” she said, “even if they have no idea what it’s like to walk down the street in Belfast.”

But despite, or perhaps because of, the work’s wide resonance, Doherty has developed some qualms about its reception. As she toured France, she felt a response from the public: “‘Oh my God, these poor people in Belfast,'” she said. “They see it as the other.” It can come from a certain place, she added, “but this is about kinetic trauma. This is about you too.”

She also expresses her suspicions about the frequent use of the term ‘working class’ in relation to her art. “I think people then assume I’m really working class, so I have a right to talk about it,” she said. “I’m not rich, but I’m not…” She searched for the right words. “I have a MacBook Pro and my whole job is dancing! There’s something really chic about that.”

Under the pressure of a busy touring schedule, Doherty has also come to question her ideas about dance and healing. “I used to have more faith in the healing that dance could do,” she said. “Now I’m a bit skeptical. I don’t know if it’s just another company.”

Yet her sensibility on stage and in the studio suggests that her faith persists. During the Sugar Army rehearsal, she listened as the dancers, who had just performed their own short movement phrases for each other, reflected on the exercise. One dancer shared that she had been nervous and trembling, but used that sensation to tell a story.

Doherty might tell. “Every feeling and every emotion you have,” she said, “can be useful if you use it as fuel for art.”