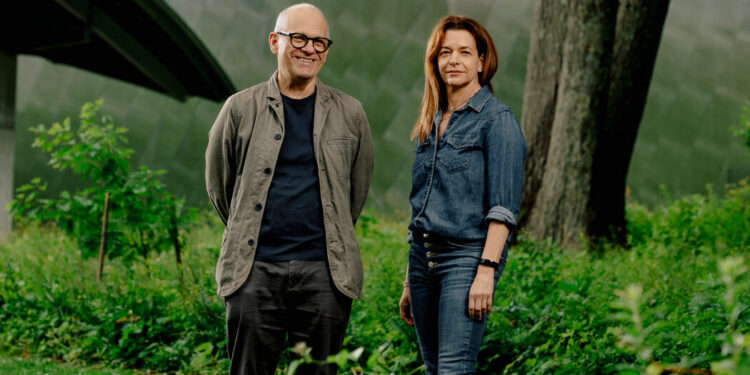 The composer David Lang recently danced the hora at the wedding of a relative – a gay Orthodox rabbi-to-be who married his gay Orthodox rabbi boyfriend. “It was all joyous and all frum,” he said, using the Yiddish word for pious.

“I love that you said frum,” choreographer Pam Tanowitz said, adding, “I live for the hora. I go everywhere and do a hora.”

Lang grew up with Israeli folk dances; Tanowitz didn’t, but she was fascinated by the shape. “I’d look up on YouTube how to do certain steps, and then I’d make up all my own sentences,” she said. “I became obsessed with it.”

The two performers recently spoke at a cafe in Soho about their shared Jewish heritage ahead of the premiere of “Song of Songs,” their latest collaboration, inspired by the biblical poem of love and lust that is often interpreted as a metaphor for faith. The full-length work was commissioned by Bard College, where Tanowitz is the resident choreographer, and will make its debut at the Fisher Center for the Performing Arts there Friday through Sunday.

Four years ago, Tanowitz presented her acclaimed “Four Quartets” at Bard, based on the TS Eliot poem. It followed 2017’s “New Work for Goldberg Variations,” set to Bach, and Tanowitz saw similarities between the two. She was considering, she said, a trilogy with another piece of historical music or lyrics she could “rub against.”

She also noted that both Eliot and Bach are, to varying degrees, tainted with anti-Semitism and said she realized, “I have to make a Jewish dance.”

And then that impulse became more personal: her father died shortly after the premiere of ‘Four Quartets’. She began to think a lot about the kaddish, she said, the Jewish mourning prayer, and remembered Lang’s incantatory piece “Just (After Song of Songs)” from 2014, consisting of quotes from the poem. “It touched me,” she said of Lang’s music. “I was very touched by it. And I just thought, okay, let’s do it.”

About the collaboration, she contacted Lang, with whom she had collaborated in 2015. He was a game, but was hesitant to return to ‘Song of Songs’, having made music to it twice before. “I had to think of other ways to read this piece,” he said. He dived back into it and found more phrases, images and ideas that appealed to him. “It’s just such a rich text,” he said.

In the end, he composed three new songs which, along with ‘Just (After Song of Songs)’, will form the score for their ‘Song of Songs’, accompanying Tanowitz’s marriage between classical, contemporary and folk movement, which shifts the focus from the individual to the collective.

Gideon Lester, the artistic director of the Fisher Center, said “Song of Songs” portrays “a community of dancers in a sort of courtyard.” He also praised the way in which Tanowitz seamlessly blends dance styles in her movement. “In each of her dances,” he said, “you get a history of dance.”

In the cafe, Tanowitz and Lang talked about their approach to collaboration and the lasting impact of their Jewish upbringing. These are edited excerpts from the conversation.

How did the collaboration go? Did you study ‘Song of Songs’ together and discuss how you would go about it?

DAVID LANG Some of the collaborators are a little in each other’s faces, but the collaborations I enjoy most are those where someone says, “Music can play a really big part in this piece, and I’m not doing music. So you look at it and you react to it.”

PAM TANOWITZ I’m not going to tell David what words to put in his text. That’s not interesting to me. David’s music is perfect for dance, it’s so beautiful and effective, the way it can create an environment and a space for the dance to live in.

Pam, you did a lot of research on Jewish dance prior to this project, including through a fellowship with the New York Public Library for the Performing Arts in 2020. What did you learn from that?

It’s so unspecific when you say Jewish dance. So I covered a little bit of everything. And then I read the poem. And then I stopped reading. And then I danced. I go back and forth. I balance between research and dancing. And I don’t do anything literally.

LONG What is really interesting to me about your pieces is that they are formal and also about something. You have to look at them up close and then you realize, Oh wait a minute, there’s something going on here. But it is not the surface of the piece. I need to find out what the story is, beneath all this formalism.

TANOWITZ I do that on purpose. Because I’m asking the public to invest in it. It’s important to me not to alienate the audience, but I also think they’re smarter. And I think they could be engaged.

David, do you see yourself working in a Jewish music tradition?

LONG I am not in a Jewish music tradition. And I’m not that religious, but it’s hugely important to my culture and background. But I’m super curious about what all this influence and all my religious ancestors contributed to me and my relationship with music.

Pam, did your upbringing leave a similar mark on your art?

TANOWITZ I learned all the songs and all the prayers when I was very young, and when you learn everything young, it stays with you. But like David, I’m not religious. But my father grew up Orthodox. As David talked about remembering the cantor and remembering the music, I was able to walk into a conservative temple and begin to sing the prayers. It’s like that in my body. In those moments when I’m doing a bat mitzvah or doing a wedding, doing a hora, or reciting the kaddish, it overwhelms me and overwhelms me. I feel connected somehow.

You made a video during your library scholarship that referenced artistic influences such as Jerome Robbins and Fanny Brice. Do they appear in ‘Song of Songs’ even in unrecognizable ways?

TANOWITZ David Gordon was one of my mentors. I was so lucky to be in his piece at the MoMA and I got to do a solo by him while he sang [Brice’s] “Second-hand rose.” I did it three or four times, and I didn’t know whether to laugh or cry. He sang it with a Yiddish accent. It felt like going to the temple to me.

It’s all in there, my history, my Jewish history, my dance history – my mentors, my associates. I have a vine [weaving footwork that appears in many Israeli folk dances] in all my dances. Because it’s my favorite step. Do it slow, do it fast, do it everywhere.

Had you previously recognized the Jewish influence in your work?

TANOWITZ No, that’s new. And the other thing I wanted to say is that it’s not just Jewish steps. How do these so-called Jewish steps relate to the ballet steps and the modern stairs and the pedestrian and the postmodern? All these different lexicons talk and there is a dialogue there. But I’m Jewish and I’m a choreographer, so it’s Jewish. And David is Jewish and a composer.

LONG However, I don’t know what Jewish is.

TANOWITZ Just that you are Jewish.