Review: A tap dancing soul in a spirit world Limbo 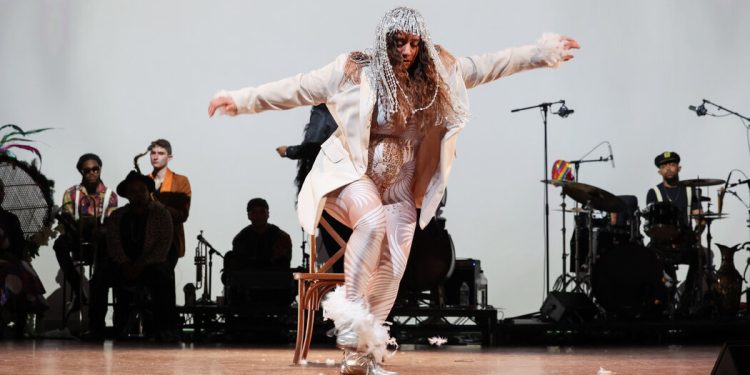 Tap dancer Michela Marino Lerman is an outstanding jazz musician. In recent years she has conquered a place for herself in jazz clubs that are not always welcoming to hoofers or players. The shows her band, Love Movement, performed at the Whitney Museum in 2019 were real moves of love, parties overflowing with good vibes and brilliance. But for her Joyce Theater debut, she’s trying something new: a 90-minute theatrical story, “Once Upon a Time Called Now.”

It is a New Orleans story set in the spirit world just before Mardi Gras. Lerman is Kahina, a woman whose ancestors intervened to give her another chance at life. Led by the orisha Ogun (the poet Orlando Watson) and a tarot card-wielding high priestess (the singer Shenel Johns), she must learn to stop doubting herself and allow love into her soul. Then, when her heart is weighed against the feather of Ma’at, she can wake up and live.

Since Lerman is an inner, all-in-the-music performer, it’s a smart choice to give Kahina inner monologues narrated by someone else: the actor and playwright Anna Deavere Smith. But these recorded monologues, laden with self-help platitudes, exacerbate the show’s problems rather than solve them.

The story of Kahina’s journey—from Orpheus learning not to look back, discovering that materialism is superficial—is carried mainly by Watson’s narration. His deft, sharp spoken word poems also, captivating or tangentially, spill over into topical commentary on America’s divided state, technological distraction and toxic masculinity.

The tap dancing (overpowered by the band too many times) comes in between the narration bits and does little to advance the story. On standard tap mode, it alternates between group unison and possibilities for solo improvisation – all high-quality things that seem almost superfluous in the narrative context. King and Almaguer get distinctive solo numbers, and a late duet for Wasiuta and Hernández to a delicious jazz waltz is the only long-term breath of dance freedom, air and water embodied in sound and movement.

Lerman himself seems more constricted. Her inner monologues rage – “Stop telling me I’m not good enough!” “I can’t take this anymore!” – but it’s when the show around her becomes quiet that you can hear the great eloquence and power of her feet, never quite let go despite the theme of self-confidence.

At the end she sings movingly in a small voice: “Just Remember/Find your center.” At that point, “Once Upon a Time” has arrived at a second-line carnival energy. But Lerman’s strongest artistic voice is not realized in this show.

Michela Marino Lerman, ‘Once Upon a Time Called Now’

See you Sunday at the Joyce Theater; joyce.org