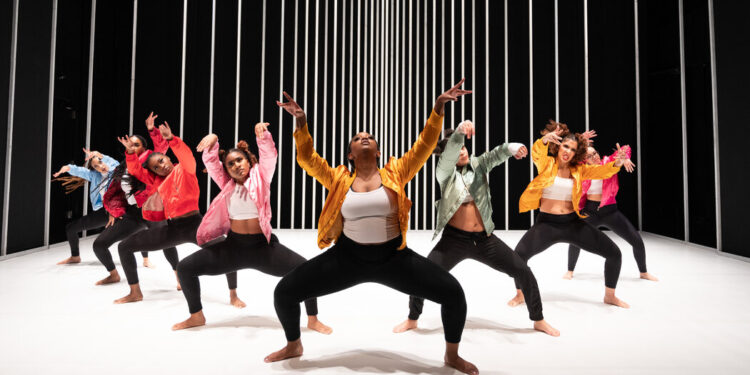 The choreographer Oona Doherty understands that in everyone – and in every body – there is a tension between hard and soft, tough and vulnerable, pleasure and pain. For all their attitudes, her characters, anonymous working class youth from Belfast, hurt. And while her movement language creates a demanding physical entity, transcendence comes through an inner struggle: fighting the hard to find the soft.

In ‘Hard to Be Soft – A Belfast Prayer’, inspired by the city she grew up in, Doherty explores the trauma caused by the Troubles, which lasted for about 30 years. The work, which unfolds in four movements, begins and ends with shape-shifting solos in which Doherty embodies young men from Belfast – with an air of machismo she snaps a lip, puts her hands deep in her pockets and stands hunched over, her back curled in his pelvis. She takes a few steps, a meandering kind of walk known locally as dander.

But gradually, as her mannerisms evaporate, she becomes more than a macho body. She has described “Hard to Be Soft” as a physical prayer, and moments have an otherworldly effect: What’s holding her captive? What is trying to escape? It is the soul, the essence of a spirit.

With the incense opening tableau, the theater – the new Irish Arts Center – even smelled like a church. (It was the first dance performance in the space, but that still didn’t warrant 20 minutes of monotonous speeches.) The score, by electronic musician and composer David Holmes, had a liturgical feel, as choral music was mixed with voiceovers that capture the sound of chaotic street life.

Fights erupt in the score as Doherty—her blond hair combed back into a small bun, a gold chain bouncing against her chest—crumbles and rises from the floor as if floating between a dream and a nightmare. All the while, the lighting gives the set, essentially a tall white cage that opens up on one side, an eerie, angelic glow. Is it heaven or purgatory?

And does Doherty laugh or cry? Doherty has an uncanny ability to silence her features so abruptly that her face can suddenly become as still and peaceful as eyes staring at you from an icon. The way she uses her eyes is one of the most eye-catching things about her – sometimes they shine brightly; sometimes they are dead.

A blackout gives way to the second part, in which a female voiceover talks about overcoming the ‘tragedy in the walls’ by ‘dressing it with glamor because we have to highlight the tragedy’.

For the women of Belfast, she says, looking good is a form of armor. It also gives strength. Eight young women from Young Dancemakers Company whirl into space, circling the stage as if marking territory with candid, punctuated steps to a steady percussive beat. Wearing black leggings and brightly colored satin jackets, they are boldly defiant. Doherty calls them the Sugar Army for a reason. (To fill their ranks, she finds local dancers in every city she tours.)

Inspired by the girls she went to school with in Belfast and who, as she wrote in the performance publication Draff, practiced disco dancing before competitions, Doherty’s shrill, tough army echoes her memory of them: “Sexuality and shapes sweep into space like weapons. ”

Here they may have needed more stage time to discover how to pull their individual strength into a glittering unity. One of the most tender moments comes when they fall apart, laughing and falling over each other to convey the innocence of women-to-be — some there, others on the doorstep.

In the third movement, John Scott, an accomplished choreographer from Dublin, and Sam Finnegan—both bare-chested, with jutting bellies—slowly make their way to the center of the stage like sumo wrestlers. A voice-over alludes to the relationship between father and son. An embrace quickly becomes more tense, more burdened – one pushes, the other pulls – because the way they use their weight and flesh (again, locating the tension between soft and hard) refers to sadness, to conflict. When Scott briefly grabs the back of Finnegan’s head, we see not only love, but also the fear of it.

Physically, ‘Hard to Be Soft’ did not fit well with the Irish Arts Center theater. It seemed cramped and sightlines were blotchy for both the opening solo and duet, much of which was set on the edge of the stage. But the final solo, in which Doherty enters the stage with a hard fall, shone.

Performing again as a young man from Belfast, she gradually slides between fear and calm – a sort of resignation – as flickering memories take over her body and the sound of melancholic strings fills the air. Doherty repeats moments from her first solo as she patiently paints the story of a man’s life through dance. Or is it a physical prayer? In “Hard to Be Soft” it feels the same.

Hard to be soft – A prayer in Belfast

Until January 23 at the Irish Arts Centre; irishartscenter.org