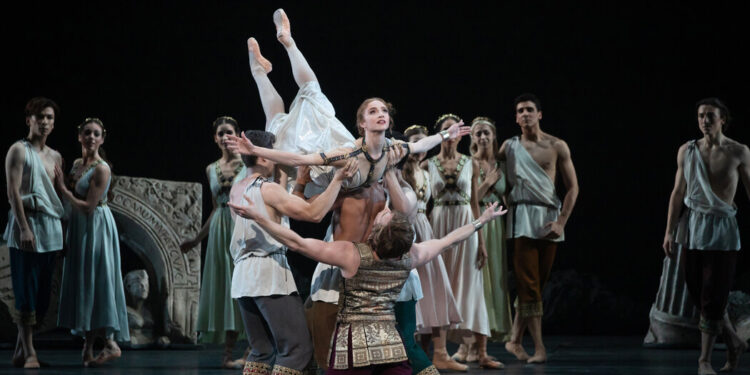 “Of Love and Rage”, Alexei Ratmansky’s story ballet based on a romantic novel from ancient Greece, has a “Sleeping Beauty” moment. The work premiered in California in March 2020, just before the pandemic closure, when much of the world was forced into a silence that in some ways felt like a deep, sustained sleep.

But on Monday, it was as if the spell had been lifted when this ballet, ambitious and daring with luscious, full-bodied dance, had its New York premiere with American Ballet Theater. It also fueled the company. Last week — the Ballet Theater in residence at the Metropolitan Opera House’s first performances since 2019 — the dancers were stuck in a stale production of “Don Quixote.” With “Of Love and Rage” they were transformed with a renewed sense of purpose and promise.

Although the ballet is inspired by ‘Callirhoe’, an early Greek prose work by Chariton of Aphrodisias (written between the first century BC and the second century AD), this two-act production exudes a grandeur that is fresh, compelling with airy , great dance that doesn’t overlook the delicate stance, whether it’s a relaxed wrist in a raised arm or the low lunge of a sprinter about to take off. There’s a lot of story, maybe too much — this isn’t the time to skip the program’s synopsis — but Ratmansky relies on dancing to carry it along, not fake, over-choreographed acting.

“Of Love and Rage” is rarely static. when there is mime, it develops as a rich extension of the body. When the dancing is soft and elegant, it extends beyond the tips of the fingers. And when it’s fiercely masculine, bodies ignite and burn across the stage like a turbulent, raging fire. Featuring pirates, prisoners, and war, this ballet is an ongoing churning adventure — like a ballet-like “Danger Island” or, really, any vintage reckless movie — but underneath, “Of Love and Rage” is a meditation on love, loss, and forgiveness.

Primarily in Philip Feeney’s arrangement of music by composer Aram Khachaturian from “Gayané,” a lively, luminous ballet score, “Of Love and Rage” reflects Ratmansky’s fascination with Greek art in choreographic formations and positions, as well as in his sets and light costumes in Greek style of Jean-Marc Puissant, who transports the ballet from Syracuse, a former Greek city in southern Italy, to Babylon. In the background looms Aphrodite, the goddess of love, whose head occasionally hangs over the back of the stage.

In Ratmansky’s portrait of the ancient world, jealousy leads to an impulsive and devastating error of judgment when a young bride is murdered by her husband. At least it seems that way for the first time. The story, with its parade of characters, can get a little complicated. (Say yes to reading the book, not just to better follow the plot, but because, aside from violence, it’s kind of a romp.)

At its core, it’s the story of Callirhoe (Catherine Hurlin) — a woman so beautiful that people assume she’s the goddess Aphrodite — and Chaereas (Aran Bell). They meet, they get married. But other men like Callirhoe too; at first, three suitors come up with a plan to break up the couple. It works and the effects are devastating.

The young lovers have matching gold bracelets; a replica is used to make it look like Callirhoe is cheating on Chaereas. A seething Chaereas enters Callirhoe’s apartments; when executed, her body is lifeless. (In the novel, he kicks her; Ratmansky and his dramatist, Guillaume Gallienne, have omitted that detail.)

Chaereas is shocked and Callirhoe is buried, although she is not actually dead; she wakes up like a pirate and his men rob her grave. They take her with their loot, and this is where the ballet suddenly turns into a major chase: Chaereas, with Polycharmus (Andrii Ishchuk), his faithful friend, gives chase to Callirhoe, who has been sold to Dionysius (Daniel Camargo) , a nobleman and widower. This is Callirhoe’s fate, again and again: a man takes one look at her and boom! He is in love.

After discovering she is pregnant – by Chaereas – Callirhoe decides to marry Dionysius to protect the baby. Meanwhile, while searching for Callirhoe, Chaereas and Polycharmus are arrested and taken to the palace of Mithridates (Jarod Curley, a corps de ballet member who replaces the injured Cory Stearns), who also falls in love with Callirhoe and battles it out with Dionysius. The king of Babylon is called to rule. But who will show up then? Cheers, of course.

If Bell, with his boyish enthusiasm, and Curley, sharp and authoritative, are good, Camargo is great – commander, heroic, gentle, sad with a fate almost worthy of a sequel. But Hurlin as Callirhoe is divine, showing us how she grows from a beautiful girl to a woman who realizes her affliction: the kind of beauty that makes men, all men, want to possess her as a glittering object.

Will the other Callirhoes measure up? (There are several casts.) The simple serenity of Hurlin’s face, framed by wavy curls, is captivating, as is the daring scope of her expressive, unique dance. She leaps into Bell’s arms with the agility of a cat; the width of her sculptural, supple upper body, especially in curves where her arms open wide like blossoms, allows no awkward moments or overly embellished theatricality.

She is Callirhoe – beautiful, yes, but also wry, smart and annoyed by the way her life is unraveling before her eyes. Hurlin brings a naturalness into an unnatural role.

After winning a war, Chaereas – the battleground between him and Dionysius, set to Khachaturian’s invigorating “Sabre Dance”, a thriller of sound and choreographic texture – finds its way back to her. His remorse is almost poignant. When they renew their bond, things start hesitantly, but Ratmansky gradually relives moments of their early compelling choreography when their love was pure and simple. Their wrists whirling, their shiny bracelets flashing together and then apart, their bond is palpable. And the strangest thing happens to Hurlin’s face and body: the tension melts away and her dewy radiance is restored.

“Of Love and Rage” shows that jealousy can taint a relationship, but it doesn’t always destroy it. Born in Russian and raised in Kiev, Ratmansky was devastated by the war in Ukraine. In an interview with DailyExpertNews, he said the ballet “is definitely not mine at the moment.”

But in ‘Of Love and Rage’, made before the horror started there, Ratmansky also seems to be exploring today’s world. It comes down to a word in the ballet’s title: Rage. Its toxicity, its ubiquity and wrath, is another epidemic of our time. But in Ratmansky’s adventure, anger is not what triumphs. Forgiveness and redemption do. And love.

Of love and anger

See you Saturday at the Metropolitan Opera House, abt.org†