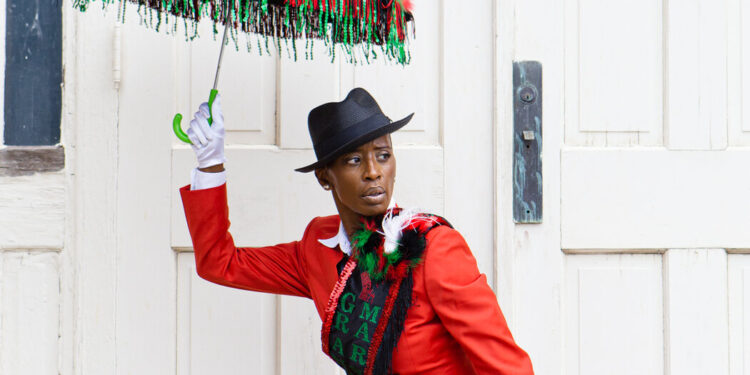 In most places people watch or march in parades. In New Orleans they have another option: second line.

As a noun, “second line” refers to those who follow a marching band through the streets — during Mardi Gras, or on any Sunday, or on the way back from the graveyard at a jazz funeral, as lamentations and hymns are replaced by upbeat music to to dance. A second line is not official or planned. It grows, all ages roll in with handkerchiefs and umbrellas, turning a parade into a traveling party.

As an adjective, “second line” can describe a distinctive beat, an Afro-Caribbean rhythm that runs through the music of New Orleans, from where it spread to the rest of the world’s jazz, R&B and funk.

“Second line” is also a verb. To the second line is dancing. There are no set steps. Everyone does it a little differently. However, most practitioners agree on one thing: it is not taught in a classroom.

“You fall into it” is how choreographer and educator Michelle N. Gibson, who grew up in New Orleans, put it in a recent interview. “No one learns second-line.”

Except Gibson does learn, or her opinion on it. She gives some of the history in her one-woman show, “Takin’ It to the Roots,” which she takes to the Jacob’s Pillow Dance Festival in the Berkshires on Fridays and Saturdays. For a few years now, she’s also been teaching second-line classes: workshops called New Orleans Original BuckShop in which she presents what she calls her “second-line aesthetic.”

Gibson, 47, has become a cultural ambassador for her hometown. “She can tap into the collective ‘Come one, come all’ spirit of New Orleans, but also hold on to the spiritual tradition and responsibility for her ancestors,” said Melanie George, associate curator at Jacob’s Pillow.

In Gibson’s workshops, she starts by helping students find the second line in their bodies, the bounce in their feet, hips, shoulders, heads. A strut turns into a skip because the dance has to cover ground. Gibson, who calls herself “sassy and saucy” and refers to herself as “Mz. G,” is an encouraging, consenting coach. Her most frequent and regular instruction: “Play with it.”

“Play with it” means playing with your own inner rhythm,” she explained in the interview. ‘That’s your real you. Everyone is different, honey, because everyone has their own different testimonials.’

Her testimony is that of a preacher’s daughter. Her father, BA Gibson, was a presiding elder and pastor in the African Methodist Episcopal Church. He spent much of her childhood pastoring at St. Peter AME Church, one of the oldest black congregations in uptown New Orleans.

Gibson’s father did not allow her to participate in secondary care. “My dad wouldn’t let me jump and shake in those streets,” she said. (As a teen, she was sometimes secretly the second line.) “But growing up in church and watching people catch the spirit, Holy Ghost dancing—that was my second line.”

Not far from the church, she found another education, at the New Orleans Center for Creative Arts, where she specialized in dance. (Other alumni of the center include Jon Batiste, Harry Connick Jr., and the Marsalis brothers.) After graduating from high school, she spent summer training at Alvin Ailey School in New York, but when she got a job to tour with the hip-hop group Arrested Development, her mother disapproved of her and called her back home.

What came next was, in her words, “a struggle, a commotion.” A marriage soon ended in divorce. While caring for her daughter, she earned a BFA in dance from Tulane University and performed with all kinds of local dance companies — Brazilian, West African, modern. “I got coded training,” she said, “but I also went out into the community and learned there.”

When Hurricane Katrina hit in 2005, Gibson had just left the hospital after giving birth to a son. She was evacuated along with her children. Then she learned that her New Orleans apartment was unlivable. She moved to Dallas, where she still lives, where she now teaches at Southern Methodist University.

After a while, she completed a master’s degree in dance and performance studies through the Hollins University-American Dance Festival graduate program at Duke University. Surrounded by successful mid-career dancers, she wondered what to contribute. She settled in her upbringing as a dancer in New Orleans. Especially after being evicted from her hometown, she wanted to dig deeper into the culture.

The result was the first incarnation of ‘Takin’ It to the Roots’, which she describes as a ‘spicy-ass gumbo’ featuring a brass band, African drummers and dancers from the company of Chuck Davis, the founder of DanceAfrica. “I made sure I got everything in,” she said, showing the roots of the second line (and by extension her own) in Senegambia, Congo and Haiti.

That concern for history continues in her one-woman version of the show, which she developed with the South Dallas Cultural Center and the Ashé Cultural Arts Center in New Orleans. And it comes through in her second-line vision.

“When you see the second line,” she said, “you see a history of Blackness, of who ended up in the port of Orleans, of when we were allowed to celebrate.” She spoke of Congo Square, the place in New Orleans where enslaved people were allowed to drum and dance in the early 1800s, a place where African traditions were interwoven and preserved. She spoke about the benevolent associations and the social aid and pleasure clubs that sponsored jazz funerals and second-line parades. And she talked about trauma, about Katrina, about those who had to leave, and those who stayed in a city that is still in turmoil.

“You can tell by the footwork and the thrust of the body,” she said. “You see their story.”

Gibson is careful to specify that what she teaches is her own second-line aesthetic, “based on my training and how I want to share it,” not second-line New Orleans natives as she experience it. “You can’t expect that,” she said. “You have to live it.” She said she sees herself as an intermediary between her New Orleans community and academia, interfering in conversations about New Orleans culture and pushing for “respect for its origins and the people it actually belongs to.”

For the Jacob’s Pillow performances, Gibson changes “Takin’ It to the Roots,” originally designed for theaters, into processional form: spectators will follow her to locations around campus that represent Congo Square and the Black Church. However, the second line at the end of the performance is default. “I always take people from the theater onto the street,” she said. “There won’t be a show you go to with Mz. G that we don’t end up going outside.”

Of course there will be a brass band with her, the NOJO 7, from the New Orleans Jazz Orchestra. The Artistic Director, drummer Adonis Rose, said he finds Gibson most distinctive as a teacher: “I’ve done pretty much everything you can do as a musician in New Orleans, and I’ve never seen anyone else come up with a curriculum on how the second rule to do.” Her teachings, he added, align with his own mission to “export our culture to people who wouldn’t otherwise be able to experience it.”

But Rose also emphasized the “spiritual experience” of following Gibson when she leads a brass band procession as grand marshal. This is another role she takes very seriously. Before accepting invitations to do it, she asked permission from the first female Grand Marshal she ever saw, Wanda Rouzan. “It’s a calling, an anointing,” Gibson said. “I grew up realizing that there is a Most High, and that is the reason for me to parade like I do.”

“It’s not about dance for me anymore,” she continued, adopting a preacher’s cadence. “My practice is more motivated by spiritual union, harmony, rolling together on the same rhythms and moving forward. That’s what the world needs. I want to heal the world. Let me frolic.”