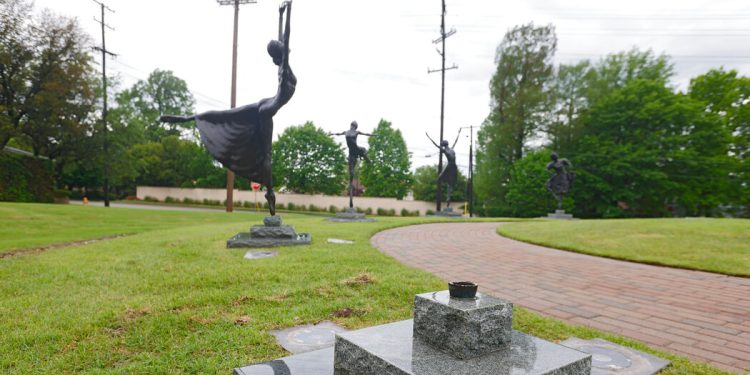 At the end of a row of statues in Tulsa, Oklahoma, Marjorie Tallchief, a celebrated Native American ballerina, nestled in bronze since 2007, stood en pointe in a tutu.

But on Friday, her statue, on the grounds of the Tulsa Historical Society & Museum, was cut down from its base, dismembered and sold for cash, said Michelle Place, the museum’s executive director.

On Monday, Ms Place said, workers at a local recycling center found pieces of Ms Tallchief’s statue, including parts of the torso, tutu and legs. They called the police.

Tulsa Police said in a statement it was investigating the theft but did not immediately respond to emails or phone calls on Monday.

Ms. Place said that when five sculptures, including Ms. Tallchief’s, were installed in 2007, they were worth a total of $120,000. Someone sold parts of Mrs. Tallchief’s statue at a recycling center for $266, paying for the bronze pieces by the pound.

But museum staff believe two people stole the statue and took the parts to two different recycling centers, Ms Place said. The head and arms of the statue have not been found.

“I guess they had no idea of ​​the significance of these bronzes,” she said.

Mrs. Tallchief was an agile and versatile dancer and an international star performing in major French and American companies.

French critic Irène Lidova described Mrs. Tallchief in 1950 as a brilliant and dynamic performer. “Through her quasi-acrobatic virtuosity,” wrote Mrs. Lidova, “she embodies the perfect dancer for our time.”

Ms. Tallchief grew up on the Osage Nation reservation in an Oklahoma oil family and died in November 2021 at the age of 95.

She and her older sister, Maria Tallchief, were part of a group known as the Five Moons, Oklahoma Native American ballerinas who soared to the heights of ballet in the 20th century, when many famous ballerinas were white.

She and the other three – Yvonne Chouteau, Rosella Hightower and Moscelyne Larkin – are commemorated in the row of statues outside the Tulsa Historical Society & Museum.

Mrs. Place said it was not clear why the statue of Mrs. Tallchief was chosen, but it could be because it was at the end of the row and near a tree that could hide it from view.

Alexander Skibine, one of Mrs Tallchief’s two sons, said he was incredulous when he learned that his mother’s statue had been stolen.

“Why would anyone do that?” he said Monday night.

The museum plans to rebuild the statue of Mrs Tallchief. Ms. Place said Gary Henson, who made the statue, told her he would “bring the statue back to life.”

The museum is trying to raise $10,000 to cover the statue’s deductible and $5,000 to install security cameras at the Five Moons, Ms Place said.

In a statement Monday night, Tulsa Mayor GT Bynum said the statues are “a point of pride” celebrating the city’s Native American heritage.

“That someone should steal and destroy one to sell for scrap,” he wrote, “is a disgrace.”