In a virus-ridden future, humanity persists in the midst of grief 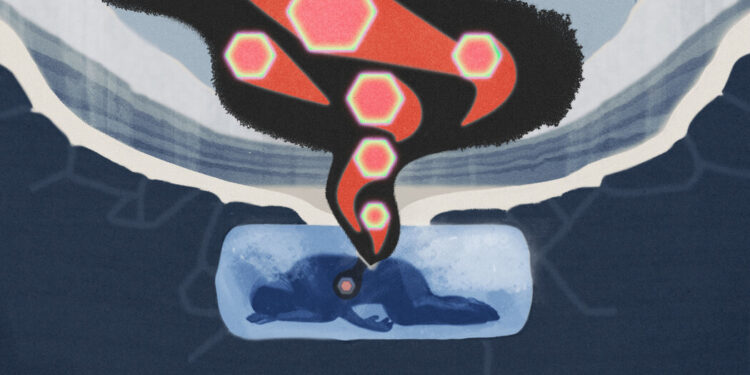 HOW HIGH WE GO IN THE DARK
By Sequoia Nagamatsu

How do we respond to the self-made devastation of the Anthropocene? With dark humor? Resistance? Fury? Sequoia Nagamatsu’s moving and thought-provoking debut novel, “How High We Go in the Dark,” has an answer: with grief.

In the near future, scientists are investigating a Siberia that is melting from climate change as if “a god had unzipped the snow-covered swamps.” But an exhumed Neanderthal corpse hides something inside: a catastrophic virus. The resulting “Arctic Plague” will transform the world. People are building euthanasia amusement parks and funerary skyscrapers. They fix robotic animals that speak for the dead, or retreat to virtual reality worlds. Grief and loss permeate every page in a way that resonates with our moment without making us feel overloaded by it. (Nagamatsu published many of these chapters years before Covid emerged.)

If you notice that my summary doesn’t mention any characters, it’s because this novel-in-stories features different narrators and settings in each chapter. If you’re a lover of short stories – like I am – you will be impressed by Nagamatsu’s meticulous craftsmanship. If you crave lingering character and plot arcs, you’ll have to settle for admiring the refined prose, gripping meditations, and unique concepts. Hardly any small pleasures.

The reader can best approach the book as a melancholy “Black Mirror” season. Chapters with titles like “Elegy Hotel” and “30,000 Years Beneath a Eulogy” each contain discrete, inventive conceits, even if they’re set in the same world. In ‘Pig Son’, a grief-stricken scientist bonds with a tech pig who learns to speak while growing organs for dying children. This is a beautiful but gloomy book. Humanity has long transitioned to humor in our darkest moments, but levity feels absent, even in a chapter narrated by a stand-up comedian. That said, the somber tone unites the various characters and storylines.

“How High We Go in the Dark” is a welcome addition to a growing trend of what we might call the “speculative epic”: genre-bending novels that use a wide aperture to tackle big issues like climate change as they move between characters. , jump timelines and even story modes. Some recent or future examples include Matt Bell’s “Appleseed,” Hanya Yanagihara’s “To Paradise,” Anthony Doerr’s “Cloud Cuckoo Land,” and Emily St. John Mandel’s “Sea of ​​Tranquility.” The ur text could be David Mitchell’s ‘Cloud Atlas’, with its nested stories stretching from the 1800s to a dystopian future. Why does this form speak to today? Perhaps it’s a natural reaction to the autofiction trend of the past decade, with its sheer realism and limited subjectivity. Or maybe it’s because the problems we now face are so overwhelming that only a large, imaginative canvas can tackle them.

Genre inflection can sound the alarm for science fiction and fantasy readers who assume – often rightly – that a literary author is praised for infusing genre elements into a work without actually investing in it. This is not the case here. Nagamatsu touches on both the “literary” and “science fiction” targets, offering psychological insights into lyrical prose while seriously examining speculative conceits.

How do you solve such a vast mosaic? Nagamatsu tries an interesting approach. Two final stories expand the scope even further: one that sends humanity into the future on a generational starship in search of a new start, and another that reaches into the cosmic past to mystically explain our origins. I found the former more successful than the latter. But in the end, it’s the little human moments that settle into the reader’s heart. At an amusement park for dying children, an employee watches as a boy’s mother “gives him one last hug and sip from his juice bottle before he pulls out a syringe.” Elsewhere, a lone man falls in love with a woman in the metaverse who “talks about life despite the grief.” “How High We Go in the Dark” is a book of grief at the destruction we bring upon ourselves. Still, the novel reminds us that there is still hope in human connections, despite our grief.