Like a pile of Golden Retriever puppies drenched in glitter 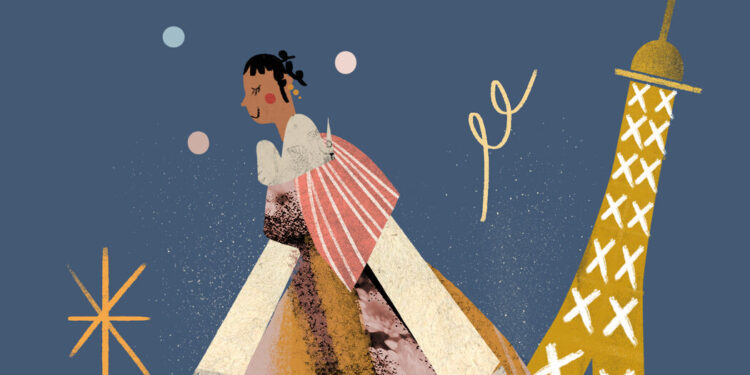 Romance has been in inheritance trouble down to its elbow-length gloves since Longbourn first brought it in. Aristocratic titles, family fortunes, and wills with unlikely marriage requirements have become standard plot mechanisms, and they’re all featured in this month’s romances.

A CARABIAN HEiress IN PARIS (HQN, 368 pp., paper, $12.99) is Adriana Herrera’s first historical, and her larger-than-life characterization translates beautifully from the world of her contemporary romances. Fans of Sarah MacLean’s “Bombshell” are sure to love the dazzle and drama of this series opener. And it’s great to glimpse belle epoque Paris in a romance; more of this please!

Dominican heiress Luz Alana Heith-Benzan is a rum distiller; Evan Sinclair makes whiskey and is the rebellious son of the Duke of Annan, a truly horrific human being. Both our leaders are in Paris for the Exposition Universelle, hoping to win acclaim for their products and expand their markets. Both also have to deal with complicated legal legacies that thwart their vision of the future. As is so often the way in romance, the solution is a marriage of convenience that both parties quickly long for in order to make a real marriage.

This book wants the capitalist characters to succeed on their merits. The glittering wealth fantasy of historic romance—ballrooms and gowns and beautiful homes—is an entrepreneur’s fantasy here, too. Luz Alana attends soirees for both business and social reasons, and Evan’s title is a lever that opens financial doors for those who could snub a tan Caribbean businesswoman. If wealth and power are measures of value, then women of color deserve wealth and power, and woe betide anyone who stands in Luz Alana’s way.

Speaking of disgusting dukes, now we have Cat Sebastian’s latest, THE PERFECT CRIMES OF MARIAN HAYES (Avon, 352 pp., paper, $15.99). A blackmail letter from a thief to a duchess leads to a brief letter flirtation, and before you know it, our leads are on the run together. The first book of the series, “The Queer Principles of Kit Webb,” expounded the characters’ rejection of inherited wealth and titles, and this book takes it further into complete anarchy.

Marian, Duchess of Clare, has shot her evil husband, but doesn’t know if he survived to accuse her. Our charming thief – Rob by name and Rob by nature – has revealed the Duke’s secrets, but is still hiding some of his.

Rob has a soft spot for stern, brilliant women (who doesn’t?), and his kindness plays off beautifully against Marian’s sharper angles. They don’t care much about conventional morality, but they care a lot about the people they love, a category that is slowly starting to absorb each other.

If romance is designed to expose the deepest workings of one’s heart, then it’s relentless to Marian and Rob – oh God, I only saw what she was doing there – in a romance. They resist fame the same way they flee the law: on every page of this book, they see them trying to wriggle out of the reader’s watch. Selfknowledge? You might as well offer them a cup of drugged wine (an example not chosen at random).

I couldn’t have loved them more.

Finally we have Sangu Mandannas THE HIGHLY SECRET SOCIETY OF IRREGULAR WITCHES (Berkley, 336 pp., paper, $17), which will be published on August 23. Mika Moon’s magical social media videos aren’t fake for influence: she’s actually a real witch, hiding in plain sight. When she receives a desperate request to teach three young witches at a remote Norfolk estate, she follows her magical instincts and accepts – and gets in trouble with a hot but gruff librarian, a clique of elderly caretakers and three children with many more magic than they know what to do with it. And then, horribly, lawyers come along.

This book is as soft and unsubtle as a pile of golden retriever puppies drenched in glitter – but the longer I read, the more I loved it. There’s a sadness at the base of world building here that I found compelling: witches are all orphans whose parents die young. Lonely children become isolated adults, discovering their magic on their own and living in a familiar kind of semi-secret.

Mika wears the fear of her upbringing like a suit of armor, clumsy and constricted by it, but painfully vulnerable underneath. She can’t imagine a better world for her own good – but she’ll move mountains if it means these kids don’t have to suffer like her.

It makes a small but meaningful shift in the angle of the happy ending, which is usually so focused on the main characters’ bliss in the present. More than many, this romance looks to the future and imagines a better world. Inheritance not only as something you receive, but also as something you pass on. Not in titles or land or money, but in a more precious means of payment: love and support and hope.