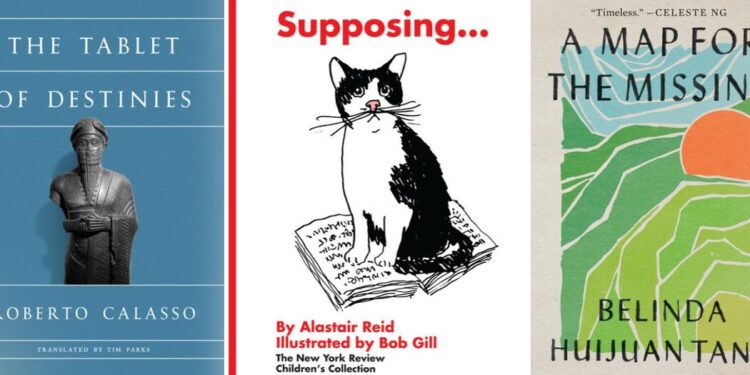 SUPPOSED … , by Alastair Reid. Illustrated by JooHee Yoon. (Enchanted Lion, $18.95, ages 5 to 8.) In her transformative twist on the 1960s New Yorker’s children’s eye classic, Yoon has added a girl and a dog, rearranging the “what-if” scenarios to make them connect better and, brilliantly, the book illustrated as if children themselves were the artists.

A MERMAID GIRL, by Sana Rafi. Illustrated by Olivia Aserr. (Viking, $17.99, ages 5 to 7) Heba shows her friends by the community pool she can dive, flip, and race just like they do, wearing a burkini, in this lavish picture book that also celebrates the generations of Muslim women who came before her.

BES SONG, by Michaela Goade. (Little, Brown, $18.99, ages 4 to 8) A girl and her grandmother collect berries on an Alaskan island “on the edge of a wide, wild sea” in this cheerful (and first self-written) picture book from the Caldecott Medal-winning illustrator of “We Are Water Protectors.”

THIS TIME, THAT PLACE: selected stories, by Clark Blaise. (Biblioasis, paper, $18.95.) Presenting a life’s work of the Canadian-American author, this collection of 24 stories paints a restless, uneasy portrait of society at the turn of the 21st century.

A CARD FOR THE MISSING, by Belinda Huijuan Tang. (Penguin Press, $27.) In this riveting debut novel, a Chinese math professor living in 1990s America returns to his hometown to search for his missing father, a journey that leads him to reevaluate and relive old relationships. thinking about his childhood in post-Cultural Revolution China.

THE DESTRUCTIONISTS: The twenty-five-year split of the Republican Party, by Dana Milbank. (Doubleday, $30.) An opinion columnist for The Washington Post gives a thorough and scathing account of how the Republican Party fell prey to Trumpism, from the rise of Newt Gingrich as Speaker of the House in 1994 to political hotbeds like the war in Iraq and Jan. 6, 2021.

THE TABLET OF DESTINATIONS, by Roberto Calasso. Translated by Tim Parks. (Farrar, Straus & Giroux, $25.) The 11th volume of the late Italian writer and scholar’s investigation into ancient religion interprets Mesopotamian mythology to tell the story of Utnapishtim, an eternal figure who saved life on Earth from a catastrophic flood sent by vengeful and murderous gods.