Amitav Ghosh on New Book Gun Island, our changing world and the creepiness of everything 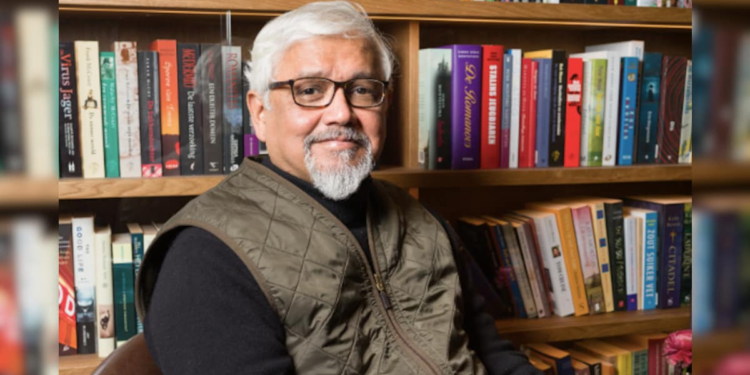 Amitav Ghosh is a remarkably forward-looking writer. His latest novel Gun Island is a book for the new world. Although the book centers on current issues that threaten our future, the author has not yet sworn to despair. Despite the planetary destruction, chaos and ensuing suffering, he is hopeful.

We sit in Mumbai’s iconic Taj Mahal palace on a balmy afternoon discussing it all – his latest book, Jnanpith victory, friendships with Ram Chandra Guha and Vikram Seth, his love for the Sunderbans, fascination with emoticons, deep concern for our planet and why he thinks we still have a chance.

It’s interesting how Gun Island looks at migration and climate change through the common lens of displacement. How did the theme come about?

Both themes are very important to me. I thought about them for a long time. It’s also a reflection of my own history, because I’ve traveled a lot, been to many different places.

In 2015-2016 I became very interested in the great European refugee/migration crisis. However, the news stories were always aimed at Syrians, Iraqis and Africans. But I could see from the pictures that there were also a lot of South Asians and that really caught my interest and I wondered why people weren’t writing about them, why they weren’t part of the story.

So in 2016-2017 I spent a long time in Italy just going to the migrant camps, refugee processing centers, meeting migrants, talking to NGOs, other people who have been working on these issues. When we read about migrants, journalists usually give you some kind of idea, but you rarely get the feeling of hearing the real voices of the migrants – why do they travel, do they leave on these trips. I wanted to get an idea of ​​that. That was certainly a source.

Your last book, The Great Derangement, in which you discussed climate change, was non-fiction. So why choose fiction to discuss the migrant crisis?

By the time I finished writing The Great Derangement, I really wanted to get back to fiction. I see myself as a writer of fiction. It’s very hard to explain, but if you’re used to writing fiction, it’s a place you always want to return to.

Does writing fiction give you more room to explore your characters?

Writing non-fiction is much more restrictive in that sense, because I think you should stay true to the facts. Writing fiction, on the other hand, gives you freedom and allows you to see the world through the eyes of your characters, which is the most interesting thing for me.

Several of your books are located in the Bengal Delta. What makes you visit the Sunderbans again and again?

The Sunderbans are a beautiful, powerful landscape. Once you’ve been there, it haunts you. It is also a place that is changing very quickly in rather catastrophic ways. It appeals to my imagination.

How much of Gun Island stems from your own life and experiences?

I’ll give you two examples. There is a scene in the book where the narrator is walking in Venice and something falls in front of him and someone screams. That is taken from my own experience. In 1988, when I first visited New York, I was walking down a street and suddenly I heard someone yell “shabdhaan”, which is Bengali for careful. And the next moment this masonry fell right in front of me. I looked up and realized that if I had taken one more step, I would have been seriously injured. But because I understand Bengali, I stopped. It was just so creepy. I remember it to this day and it somehow made its way into this book.

Now I will tell you something that is quite the opposite. The book has this scene in Los Angeles where a wildfire is coming towards the museum. This actually happened recently, but after I wrote it.

Don’t you find it creepy – the life that art imitates so closely?

It’s creepy. Gun Island is all about the creepiness of the world we live in now. There’s something so strange, if not at home, so eerie about this world and it’s partly because of the madness of politics, because of climate change itself.

It is fascinating how the novel deals with what is real and what is not. It deals with myth, folklore, legend and discusses issues as real as climate change and migration…

That is exactly what one is trying to understand – what is real? If you look at the papers, on the one hand there is the reality of this extreme heat wave in Delhi. At the same time, there is a terrible drought in Maharashtra. It’s been going on for years and it seems to be getting worse. There is terrible suffering involved. But then there’s the reality of a cricket match in England, movies are coming out. Can we really say which is more real?

For those who follow cricket and movies, that is as real as this reality that others are dealing with. I think these questions about what makes reality permeate our lives all the time. We find ourselves dealing with them all the time.

Despite natural calamities staring us right in the face, most of us are blissfully ignorant. Why do you think there is such indifference, dissociation?

I really can’t answer. It’s like people just don’t want to know. This is the strange. We think of ourselves as modern, rational, but in the most obvious of ways, we’re not. What can you say?

What is the way forward?

I really think it’s a question that the next generation will have to answer and answer. I come from a generation that has lived off the fat of the land. Greta Thunberg points the finger at my generation and says, “You didn’t do what you should have.” And she’s right. The fault lies with people of my generation. So it’s really up to the young people to decide how to deal with this, resolved.

Read: Close to the Bone is much more than a cancer memoir, says Lisa Ray in her debut book

You were contemporaries of Vikram Seth and Ram Chandra Guha in the Doon School. How has your comparison with them evolved over the years?

Vikram was a few years older than me and Ram was a year younger than me. We read each other’s work. Whenever I am in Bangalore I always see Ram. I have great affection, warmth and deepest respect for both of them.

How do you get more people interested in reading in the time of Netflix and Amazon Prime?

I do not know. I think people are getting their information more and more from other sources now. But one thing that has really changed and been a major factor in even publishing is that people are listening to books a lot more. Audiobooks have emerged in an important way.

I don’t think the effectiveness or circulation of books will ever disappear. But I do think that this new way of looking at stories is very exciting.

Don’t you see it as exhausting the language with digital jargon and acronyms like lol, fomo, or entering everyday vocabulary?

Not at all. The function of slang is to shut out some people so you can communicate with your own group. It has always existed that way. The whole idea of ​​it is exclusion. In fact, I find emoticons very interesting and encouraging. It is the return of the ideogram. This is another way of communicating.

Don’t you see that as a threat to languages?

No not at all. Because historically, when people created a text, they always included images and illustrations of various kinds. It wasn’t until the 19th century that language started to become completely logo-centric, which is just words. This process has really accelerated in the 20th century and it’s kind of absurd.

When I was a kid, my parents got really mad when they saw me reading comics because they thought I was going to be stupid. But it’s ridiculous. I don’t think I got any dumber looking at pictures. You could even say that this exclusive focus on the written word actually prevents us from understanding what is happening in the natural world.

Read: Shweta Bachchan on her debut novel Paradise Towers and the inspiration behind it

What do you think of promotional tours and press interactions?

I have come to appreciate the process. We live in an attention economy. When everyone is striving for your attention, I think it’s a privilege to have someone really interested in what you’re saying. One should be thankful for it.

You are the youngest and the first Anglophone writer to win the Jnanpith Award. How important is such recognition?

The idea that, with my gray hair, I am the youngest to win the Jnanpith is almost absurd in itself. That’s partly because the Jnanpith is the recognition of a lifetime’s work rather than a single book.

Within our world the Jnanpith is something very special, quite unique because it has been around for a long time and has a selection process that is respected, there are great scholars on the jury. It’s pretty overwhelming in a way because so many of the figures I looked up to, who are very important writers to me, won the Jnanpith and had the utmost respect for it.

Provide a standing desk. I’ve spent most of my life at a sedentary desk and I don’t think it’s good for you to sit all the time. For the past few years I have worked on a standing desk and it has been very good.

Read: Would be deceiving not to mention parental divorce: Meghna Gulzar on writing father’s biography