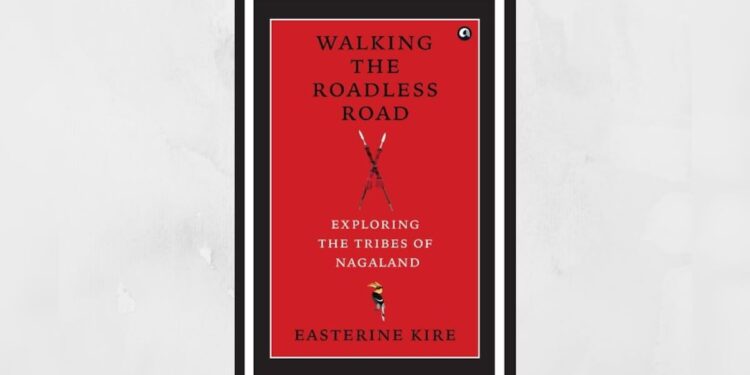 While many will be aware of the famous battles of the Storming of Normandy and the Siege of Tobruk, a few will be aware that one of the most horrific encounters of World War II saw the British achieve their first victory over the Japanese forces. , was fought on our home ground – Kohima, Nagaland.

In the book, Walking the Roadless Road: Exploring the Tribes of Nagaland, author Easterine Kire weaves together oral accounts of Naga tribesmen with historical accounts by Naga writer Charles Chasie and British military historian, Robert Lyman, to provide a detailed account of the Battle of Kohima, which is rarely mentioned in history books taught in our schools or those talked about in popular culture.

Kire’s book provides a vivid account of the Japanese invasion of India through the Northeast during World War II, when the Naga tribes first “saw airplanes and witnessed the immensity of modern war.” In the book, Naga elders recall that during that time Kohima was burned to ashes, many were killed, and their tribes endured “unspeakable suffering” in that battle that wasn’t even theirs to begin with.

Often referred to as ‘the forgotten battle’, this war was not only a turning point in Indian history, but was also voted ‘Britain’s greatest battle’ in 2013 in a competition organized among British historians by the National Army. Museum of Britain.

Walking the roadless roadhowever, is much more than just the recorded history of the invasion of Nagaland by the Japanese. Kire’s book is an insightful compendium of Nagaland’s cultural, social, political, and military history, as well as attempting to map out solutions to the ongoing disputes and lack of development in the hills that Naga call home.

While it will be an excellent book for history buffs around the world, it is an extremely important book that all Indians should read to better understand the historical dynamics of Indian northeastern states, especially to know more about Nagaland and its history, which remains largely undocumented until now.

It is an ambitious anthropological endeavor to document the histories of not one or two, but many tribes that are inhabitants of Nagaland, but Kire delivers masterful results. The book outlines broad topics such as religious beliefs and faith conversion, customary law, status of women and taboos of the different tribes of Nagaland and mentions the minute details about the lifestyle of different tribes be it their musical inclinations, village architecture, folklore, lucky charms, funeral rites or indigenous sports.

While several anthropologists accidentally bring all the Naga tribes together and give them a homogeneous identity, Kire carefully recounts the similarities that bring them together and skillfully names the differences that give them a unique identity of their own.

Kire divides the book into four parts. The first part provides an introduction to the history of Naga, the geographical profile of Nagaland, and gives you an overview of the tribal societies and their cultures.

The book traces the origins of the Naga to their “seafaring past” and also provides interesting accounts and counter-reports from historians. While one Naga researcher, Abraham Lotha, traces the footprints of Naga back to Mongolia, then through southwest China and Myanmar to India, another scholar, V. Nienu, claims that the Naga tribes and their history are still in the oblivion are shrouded.

Like mainstream Indian media today, references to Naga tribes are also limited in ancient texts and literature of India. But there are stray mentions of them in Indian historical chronicles like Ahom Buranji and Mahabharata. In fact, one of the earliest references to the Naga areas was found in 150 CE in Ptolemy’s Geographia.

Kire’s book says: “The word ‘Naga’ was not a name by which the Naga people described themselves. The origin of this name has many versions: General Mowru Gwizan wrote that the word ‘Naga’ is derived from the Chinese word Natcha. He claimed that the Chinese called the Naga people Natcharemi (the people who ran away) during the construction of the Great Wall (the reason is that they were used to unpaid labor). Another version of the origin of the word is the Burmese word Naka, meaning perforated ears.”

In the second part of the book Kire deals with religion and the tribal history of Christian conversion, in the third part she charts the political history of Nagaland and discusses the two major wars the region had experienced, and the brief periods of peace that were been. interrupted by violent confrontations between the local population and ‘outsiders’. She concludes the book with the socio-political changes Naga societies are undergoing in the present day and strongly advocates peace in the hills through dialogues between political leaders.

One of the best things about Walking the roadless road is Kire’s thorough investigation. She collects information and stories about the Nagas from the most traditional and unconventional sources – be it the field notes of British officers, tribal mythology, missionaries’ diaries, battle maps or Naga and British historians, ancient texts and oral tales passed down through generations. Nagas – and sews every detail neatly in this beautiful, easy to read book, which will take you to a Nagaland you may have never known before.

Walking the Roadless Road: Exploring the Tribes of Nagaland, written by Easterine Kire, is published by Aleph Book Company.