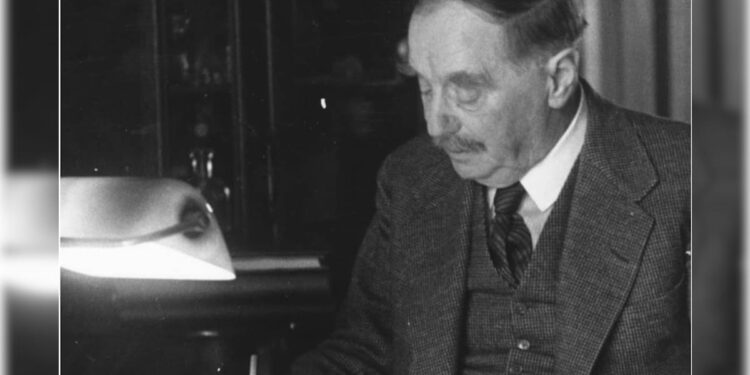 The “father of science fiction” was born on September 21, 1866 along with Jules Verne and Hugo Gernsback, Herbert George Wells or HG Wells. Best remembered for his science fiction novels, he was one of the most prominent prescient and prophetic social critics, writing a number of utopian works and foresaw the arrival of airplanes, tanks, space travel, nuclear weapons, satellite television and something like a World Wide Web. Wells’s works include scientific romances, realistic plays, as well as short stories and novellas.

On the author’s 153rd birthday, check out his must-read novels here.

The Time Machine (1895): Written as a frame story, the novel popularized the concept of time travel by using a device to purposefully and selectively travel forward or backward through time. It was Wells who coined the term “time machine.”

The Invisible Man (1897): A story about Griffin, a scientist who devoted himself to researching optics and invented a way to change the refractive index of a body to that of air so that it does not absorb or reflect light and thus become invisible. the years.

The First Men in the Moon (1901): The novel tells the story of a journey to the moon undertaken by the two protagonists. The two discover that the moon is inhabited by an advanced alien civilization of insect-like creatures called “Selenites”.

Anticipations (1901): A nonfiction, the work saw Wells tell readers that they were going through a reorganization of human society that would change every dimension of life, based on the “mechanical revolution” of the time.

The Food of the Gods and How It Came to Earth (1904): The science fiction work is about a group of scientists who invent a food that accelerates the growth of children and turns them into giants as they grow up. The book is divided into three parts and has been made into a film several times.

A Modern Utopia (1905): The novel sees two travelers falling into a space warp, who suddenly find themselves on a utopian Earth controlled by a single world government. The novel is best known for forwarding the idea that a voluntary order of nobility known as the samurai could effectively rule the world to solve the problem of reconciling progress with political stability.

The Sleeper Awakens (1910): The dystopian science fiction novel is about a man who sleeps for 203 years and wakes up in a completely transformed London in which he has become the richest man in the world. The short story “A Story of the Days To Come” (1897) is a precursor to the novel, as it is a story set in the same future society.