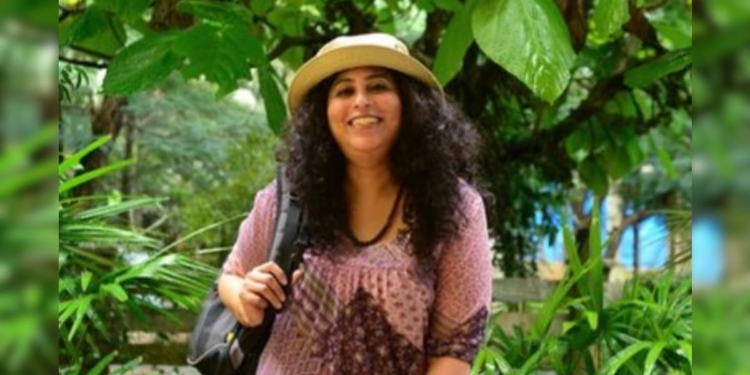 From Feluda created by Satyajit Ray to Byomkesh Bakshi written by Sharadindu Bandyopadhyay, most of Indian literature’s iconic detective characters are over half a century old. In fact, little has been done in the detective or crime thriller genre of late, and one of the few worthy additions to India’s clan of world-class detective inspectors – such as Inspector Rebus and Hercule Poirot – who think of Anita’s character Nair, Inspector Borei Gowda.

Over the past decade, Borei Gowda has appeared in two of Nair’s books — Cut Like Wound (2012) and Chain of Custody (2016) and has already gained a strong fan base among crime fiction aficionados in the country. In an interview with News18, Nair revealed that one of the shocking displays of fans’ fondness for this character that left her stunned was when a man got the same tattoo that Gowda has in her books.

“Once a male reader sent me a photo imitating Inspector Gowda’s tattoo on his arm,” the author revealed with an amused expression of shock and disbelief.

The attractive thing about characters that Nair creates is their authenticity. Inspector Gowda, for example, has all the Sherlockian instincts needed for crime solving, as well as a few eccentricities, but he’s in no way half as absurdly unreal as Doyle’s famous detective. Nor does it have the quirks and charms of Christie’s Poirot. A little soft in the middle, Borei Gowda is more like the police you meet on the street or at your local thana (police station).

When we first meet him in Cut Like Wound, he’s a booze-drinking, motorcycle-loving cop whose marriage is in ruins and who is constantly punished for his professional integrity and honesty. He is very flawed and hard to love, but Nair manages to make him a hero. In the second book, he’s a much more mature and composed version of himself, but not an ounce less interesting than in his previous avatar.

Nair, who often referred to Gowda as her male “alter ego,” revealed that all of her characters are discoveries she makes herself while writing. “In my mind I always have a rough draft of a character and I just input information to build it. But the fun of writing is when you discover that the character takes on dimensions that you could not have planned consciously. It happens. in a very instinctive and unconscious way.” said the author.

Nair, a self-proclaimed workaholic, said she “don’t know what to do with herself when she’s not writing.” ‘I have to write. It’s more of a compulsion than anything. It takes me between one and six years to write a novel.’ said the author. “I’m writing by hand, and that’s going to be my first draft. I key in the whole thing, and that’s going to be my second draft. Then I’ll write another draft.” she added. Nair is currently working on a third novel based on Inspector Gowda, which is expected to be released next year.

She is arguably one of the few female writers who attracts both male and female readers with the same magnetic force. Although Nair was initially pigeonholed as a “feminist writer” for her intricately woven stories of beautifully written female characters, their unabashed propensity to nurture their desires and their personal lives in books like Ladies Coupe (2001) and Mistress (2005), she has managed to go beyond that definition by writing various male storytelling stories and creating memorable male characters such as Gowda, proving her talent and versatility. Not just characters and stories, a major reason Nair has managed to captivate readers over the past fifteen years is the expansive setting of her novels and the variety of issues she tackles in them.

“I think as a full-time writer it’s kind of boring for me to write the same kind of stuff over and over again. So even when I’m making a series, say the Gowda series, I find different angles to pitch my stories.” said the author.

“For me, a story starts with something that bothers me. It’s an abstract thought, I don’t know why it is, but my books are the result of that thinking. I don’t have a solution at the end of the book, but I would at least have understood the problem or issue better.” she added.

Despite writing fiction, the reason why Nair’s books carry the texture of genuineness and authenticity is her thoroughness with research. Before writing Chain of Custody, which deals with child trafficking, the author had done her research by guiding child rescuers on their daily rounds for days on end, helping rescued children fill out forms and seeing the entire rescue process firsthand. She also consulted several social workers and collected stories from various files before venturing to write the book.

“I think Mistress was the hardest book for me to write,” she confessed during the interview. “For starters, I was writing about an art form that I wasn’t too familiar with, and I had to do a lot of research for it. Second, all the texts I read were in Malayalam, so I had to use my Malayalam so I could read. And the story was so expansive, it was challenging to find a structure to contain it.”

She needs a metaphor to build her stories, the author said. “In Mistress, if it was Kathakali, in Lessons In Forgetting (2015), it was the cyclone. For me, I feel like once I find the metaphor, the structure automatically falls into place,” she added.

In the last fifteen years of her career, Nair had built up an impressive body of work as a poet, essayist, novelist, children’s author, playwright and screenwriter. She has also won the Central Sahitya Academi Award and the Crossword Prize, among other literary awards. As the readers have loved and followed her works over the years, she too has gained an invaluable insight into the psyche of Indian readers.

“For a third-generation urban feminist, my books may not be all that relevant, but for a person in a small town, or even women on subways – there are people who physically look like a very urban one, but who are very traditional and orthodox. — my books are a way to reassess their own lives,” she added.