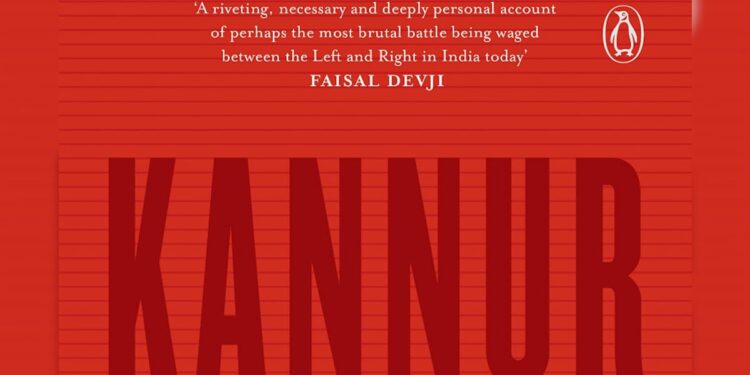 Kannur (or, as the British preferred to call it, Cannanore) is a lovely town in northern Kerala, situated in a picturesque seaside setting near some spectacular beaches that should have turned it into a tourist paradise. It is better known as a city drenched in blood from repeated political acts of violence. According to official crime statistics, 45 CPI-M activists, 44 BJP-RSS employees, 15 congressmen and four Muslim allies were killed in Kannur between 1991 and 2016.

What explains this sordid history of political slaughter? In this sleek book, senior journalist Ullekh NP explores the history and sociology of this tragic phenomenon.

Kannur, where the author, the son of a prominent communist politician, was born and grew up, is an intimate portrait of a place and its politics. The book offers a startling evocation of how entrenched the blood feud has become, how entire families adopt political loyalties as seemingly immutable as the Montagues and the Capulets, and how willing party workers are to shed blood in the name of political ideology. A cult of murder and reprisal seems deeply ingrained in a place that fully deserves the moniker “India’s Sicily”.

The murder count begins to numb the reader after a while—the sheer futility of the repeated bloodshed, the predictable revenge killings, the endless litany of loss. Although Ullekh was raised in a communist family – there is a revealing anecdote about him when, as a child, he was warned by an aunt not to play football with a boy from another family because “they are congress” – he tries admirably impartially to share responsibility for the murders.

His report makes clear that communist ideology is partly responsible for arguing that violence is justified in their cause, as is the RSS’ willingness to use weapons to achieve their goals.

But Ullekh also looks back on an old tradition in northern Malabar of fighting over the smallest of disputes, while the Chekavars, legendary martial arts exponents, fought to the death over the smallest of things. He traces historical and mythological stories of the infusion of martial blood among locals and speculates that violence may have been ingrained in the DNA of the place over time; only the excuses for it have changed.

The book is filled with portraits of brave Kannur communists such as P Krishna Pillai and AK Gopalan, legendary comrades both, and nationally lesser-known stalwarts such as P Jayarajan and MV Raghavan (who broke with the CPI-M to form a splinter party who ironically ally with the Congress-led United Democratic Front against his former comrades). “MVR”, once accused of inciting Communist violence against political enemies, was then charged in the early 1990s with devising violent reprisals against CPI-M workers on behalf of his new allies.

The author traces the violence between the RSS and the Communists back to January 1948, when the latter interrupted a speech by the RSS sarsangchalak, Guru Golwalkar. Both outfits were banned in the late 1940s for various reasons, and when both re-emerged and reorganized as effective cadre organizations with an anti-congress agenda, they found their nemesis in each other. Hostilities have erupted from time to time but have increased in both frequency and horror in recent years, almost paralleling the rise of the Sangh Parivar to national prominence and the spread of RSS shakhas in Kerala.

Ironically, the rivalry between the two groups is underscored by the fact that both groups are competing in Kerala for the Hindu votes, which the communists have won in the past over voters dissatisfied with the Congress’ pro-minority tendencies. This unusual trait explains the otherwise ideologically incomprehensible fact that the RSS has drawn many of its youth activists from traditionally Marxist families and strongholds.

Ullekh gives some publicity to the “Redtrocity” campaign led by the ruling BJP against communist-led violence, which has exposed the atrocities against BJP and RSS workers in Kannur and elsewhere in Kerala. It has turned on cabinet ministers and caught the attention of the national media for a one-sided story portraying the RSS as victims and the communists as perpetrators – but likely had little impact in Kerala itself, where most of the public tends to favor both sides equally. to blame (in Shakespeare’s words, “a plague on both your houses”).

Overall, the author seems to rely more on communist sources. This cuts both ways: while meeting and reporting on a number of prominent CPI-M leaders, most notably Prime Minister Pinarayi Vijayan, he also provides a detailed account of the career of a noted communist practitioner of violence, the “paternal ‘, ‘charming’. ‘ and ‘puritan’ marma expert Janardhanan, but doesn’t match an RSS equivalent.

Unfortunately, the strength of the book as a descriptive work does not point to a way out of the problem. Ullekh’s final chapter, in which he explores possible paths for the time being, does not end on a hopeful note. However, he can hardly be blamed for not having achieved what the police, politicians and the well-known spiritual leader Sri M have tried and failed: bringing peace to Kannur.

At the same time well-founded and deeply felt, supported by interviews with both perpetrators and victims, and supported by a wealth of factual detail, kannur is a book that provides both information and insight in a simple and clearly accessible style. It deserves to be read by anyone concerned about the spiral of political violence sweeping through this part of God’s own country.

(The author is MP of Congress from Thiruvananthapuram. Opinions are personal)