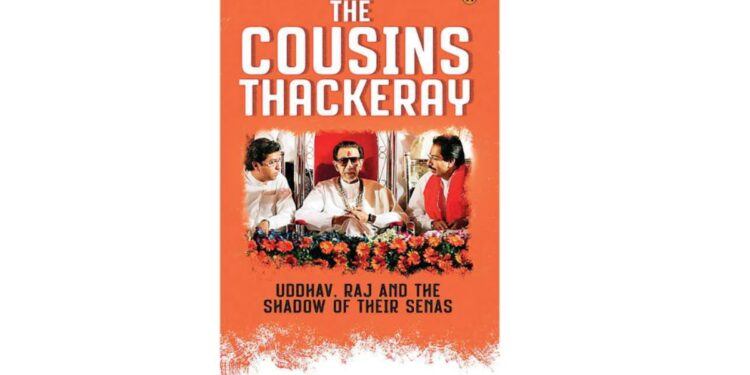 Editor’s Note: The book titled The Cousins ​​Thackeray: Uddhav, Raj and the Shadow of their Senas written by Dhaval Kulkarni trace the political journeys of Shiv Sena president Uddhav Thackeray and Maharashtra Navnirman Sena (MNS) chief Raj Thackeray. It examines identity politics and the social, cultural and economic matrix that catalyzed the formation of the Shiv Sena and the MNS from it. Above all, it is a look at what makes the Thackeray cousins ​​so integral to the politics of India, Maharashtra and Mumbai. The book also goes through the life of ‘Prabodhankar’ Keshav Sitaram Thackeray, the man who is the original patriarch of the Thackeray family.

The excerpts below are from the first chapter of the book entitled, The History of the Thackeray Family and ‘Prabodhankar’ Thackeray.

The unassuming Kadam Mansion at 77-A, Ranade Road, Dadar West, Mumbai, has been demolished and a new structure is taking shape on the site – an inevitable consequence of the old giving way to the new. But the political legacy that was born in this building, located on a side street of the historic Shivaji Park area, lives on.

Here lived ‘Prabodhankar’ Keshav Sitaram Thackeray with his large offspring including his sons Bal and Shrikant. In this ground floor flat, the Shiv Sena was born in 1966.

Prabodhankar’s contribution to Maharashtra’s social reforms and anti-caste movements remains groundbreaking. Born on September 17, 1885, in Panvel in Kulaba (present-day Raigad district) near Mumbai, Prabodhankar launched the weekly Prabodhan (Enlightenment) in 1921. Although it only lasted five years, ‘Prabodhankar’ was permanently prefixed to his name.

In his autobiography, Majhi Jeevangatha (The Story of My Life), the patriarch of Thackeray notes that his family, who belonged to the caste of Chandraseniya Kayastha Prabhu (CKP), originally came from the village of Pali in the small princely state of Bhor. The state was ruled by the Pantsachiv dynasty. He tells that the ancestors of the Thackeray family added ‘Dhodapkar’ to their surname as one of them was the killar (chief) of the Dhodap fort near Nashik, but this was dropped by Prabodhankar’s father.

The fort, in the shape of a lingam, was ceded to the Marathas by the ‘Treaty of Bhalki’ in 1752 by the Nizam of Hyderabad. After the British laid siege to the fort, perhaps in the later period of the Peshwa rule, this ancestor of the Thackeray family fought bravely despite the lack of provisions and was eventually killed.

Closets and their various fortunes

Although Prabodhankar was a guiding light of the Bramhanetar (non-Brahmin) movement, which sought to counter the overarching influence of Brahmins in Maharashtra, his autobiography mentions a family fable. When the fortress of Dhodap was about to fall, his ancestor was rescued by a Brahmin who mysteriously appeared before him, praised his bravery and teleported him to his village in Pali!

To commemorate this incident, the Thackeray family worshiped two silver statues: one of a warrior and one of a Brahmin. After his brothers insisted on dividing the family property in Pali, Prabodhankar’s great-grandfather Krishnaji Madhav ‘Appasaheb’ renounced his claim to it and left for Thane where he practiced law, establishing his reputation as a sincere, helpful man.

His son, Ramchandra alias Bhikoba Dhodapkar, a devotee of the Goddess, found work in the courts and was transferred to the small business court in Panvel, where he lived until his death. His wife (Grandmother of Prabodhankar) Sitabai, called ‘Bay’, worked as a pro bono midwife who did not discriminate on the basis of caste and religion in her work. Bay was a woman ahead of her time and disgusted by the practice of untouchability.

‘. . . our Thackeray family was very poor. In three to four generations before me, there was no information about anyone who owned even an inch of property. However, we had a hut-like home in the village of Panvel, where I was born,” Prabodhankar says, describing himself as a self-made man. The year 1818 saw the fall of the Chitpavan Brahmin Peshwas, whose twilight was marked by moral disgrace and caste-based excesses. The rule of the Peshwa was supplanted by the East India Company (1818) and later the British Crown (1858), and Brahmins eased into the new order thanks to their access to education and centers of power.

The CKPs are a small but literate and influential caste, with a high occupational status on a par with the Brahmins. Ironically, while his son Bal Thackeray and grandsons Uddhav and Raj were to take a political stance against North Indians, Prabodhankar traced CKPs’ roots to Bihar.

In his book, Gramnyancha Sadyanta Itihas Arthat Nokarshahiche Banda (A History of Village Disputes or Rebellion of the Bureaucracy), Prabodhankar writes that Mahapadma Nanda (third to fourth centuries BC), the ruler of Magadha in present-day Bihar, and the first king of the Nanda Empire, was a greedy monarch who squeezed his subjects for money. This led many CKP families to migrate elsewhere, where they made their living as warriors and scribes.

In the 17th century, some of Chhatrapati Shivaji’s bravest warriors were CKPs. Among them were his general, Netaji Palkar, named Pratishivaji (another Shivaji) for his bravery, Baji Prabhu and Murar Baji Deshpande. CKPs also served as ministers, scribes and diplomats in the Maratha court.

The war of succession between Shivaji Maharaj’s daughter-in-law, Tarabai (wife of his youngest son Rajaram), and his grandson, Shahu I (son of eldest son Sambhaji), saw the emergence of a new center of power – Balaji Vishwanath Bhat in the early eighteenth century Svardhan in the Konkan region who became Shahu’s peshwa (Prime Minister). The rule of the Peshwas saw the rise of the Chitpavan Brahmins and a corresponding decline of other castes such as Deshastha Brahmins, Saraswat Brahmins and CKPs in the Maratha court.

During Keshav’s formative years in Panvel, Brahminism’s hold on society was gradually weakened by a fledgling social reform movement. In 1848, a young man of the “mali” (gardener) caste opened in Pune, who was influenced by Thomas Paine’s Rights of Man, and realized the humiliating cruelty of the caste system after being insulted at the wedding ceremony of a Brahmin friend, teaching opened. for the masses. Inspired by a school for girls launched by Christian missionaries, ‘Mahatma’ Jyotiba Govindrao Phule embarked on his life mission for the emancipation of Bahujans (non-Brahmins) and women by becoming the first Indian along with his wife, Savitribai.

Long before the Italian Marxist Antonio Gramsci and his theory of cultural hegemony, Mahatma Phule de

the culture and iconography of the upper castes and the creation and articulation of an alternative value system for Bahujans through his Satyashodhak Samaj. He adopted the son of a Brahmin widow, born out of wedlock, and named him his heir. Phule launched the ‘Satyashodhak Samaj’ to defend the cause of the weaker sections and dismantle the caste system.

Like the stalwarts of the Bramhanetar movement – Dr. Babasaheb Ambedkar, Chhatrapati Shahu of Kolhapur, Dinkarrao Jawalkar, Keshavrao Jedhe and the contemporary Muslim reformer Hamid Dalwai – Phule is said to motivate the young Keshav. Prabodhankar and his family may have been ahead of their time, when the mental construct of caste held sway in its most brutal, dehumanizing form.

In 1925, the Rashtriya Swayamsevak Sangh (RSS) in Nagpur was formed by Dr. Keshav Baliram Hedgewar, a Telugu Brahmin. Inspired by VD Savarkar and Dr BS Moonje, a Hindu Mahasabha leader, Hedgewar believed ‘that the deep social divisions among the Hindus of India were responsible for . . . thousand years of foreign rule on the subcontinent’.

Although the organization is often accused of presenting a “Brahmin model of Hindu fundamentalism,” the Shiv Sena has

is seen as a base among various castes in Maharashtra and the model is ‘one of a broad base of the caste system but with an emphasis on Hindu, Sanskrit and regional ideals’. Those who have studied Prabodhankar’s life attribute this to his ‘bahujanized’ view of Hindutva.

In private conversations, BJP and RSS veterans begrudgingly admit that the Shiv Sena, a parallel force competing for the same ideological target group in Maharashtra, is a natural barrier to their expansion in the state because of its wider social base.

the public celebration of the festival as a revolt against the ‘Brahmin-dominated’ Ganesh Utsav that precedes it. The Ganesh festival was celebrated in Dadar through donations collected from people of all castes, although the festivities and organizing committee were dominated by Brahmins.

monopoly of the Brahmins and demanded that non-Brahmins and former untouchables be involved in the festival. A group of about 600 people, including Bole and Prabodhankar, stormed into the pandal (tent) set up at the foot of the Tilak Bridge in Dadar before the idol was inaugurated. Prabodhankar threatened that if the previously untouchable Hindus were not allowed to worship the idol before 3 p.m., he would destroy it.

In the end a compromise was reached. Dalit activist Ganpat Mahadeo Jadhav alias Madkebua, a close associate of Ambedkar, was allowed to give flowers to the Brahmin priest as an offering to the idol. However, the obscurant caste Hindus were shocked by this uprising and announced that the festival would no longer be celebrated. This led to accusations that Prabodhankar was responsible for halting the celebrations.

Prabodhankar, Bole and their associates then began to celebrate Navratri as a feast of the masses, with Prabodhankar holding up the goddess Bhawani of Tuljapur, worshiped by Shivaji Maharaj, as the deity of Maharashtra. Although Navratri was celebrated during the time of Shivaji Maharaj, the worship of Ganesh took precedence during the reign of the Brahmin Peshwas. Lokmanya Bal Gangadhar Tilak had later revived the Ganesh worship tradition through public celebrations.

In 1926, this non-Brahmin group started the ‘Lokhitawadi Sangh’ which launched the ‘Shiv Bhawani Navratri Mahotsav’ in Dadar to revive the tradition and unite the Bahujan Samaj, and the festivities spread across Maharashtra. It is said that the figure of the goddess was drawn by Prabodhankar and that the growling tiger, which would later become an integral part of the images of the Shiv Sena, was also sketched by him.

The following excerpts from the book The Cousins ​​Thackeray: Uddhav, Raj and the Shadow of their Senas, written by Dhaval Kulkarni, are published with permission from Penguin Publishers. The paperback of the book costs Rs 399.