Cyrus Mistry was not wearing a seat belt, the primary security guard 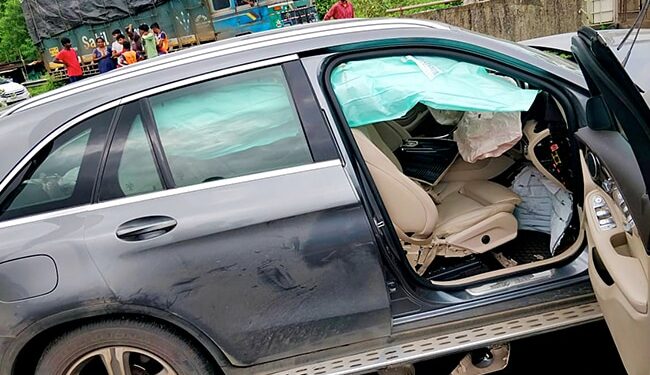 Mistry, 54, and his friend Jahangir Pandole were killed in an accident in Maharashtra’s Palghar district on Sunday.

Anahita Pandole (55), who drove the 2017 version of the SUV, and her husband Darius Pandole (60), were seriously injured.

The 2017 GLC 220d 4MATIC comes with a total of seven airbags. There are no front airbags for rear passengers in the car and only side curtain airbags.

And like any other car, airbags are ‘SRS’ or Supplementary Restraint System. The primary restraint system on cars remains the seat belt.

It appears Mistry was not wearing a seat belt and was thrown forward at great speed when the speeding car crashed into a partition.

According to a preliminary investigation, excessive speed and the driver’s “error of judgment” caused the accident, a police official said.

Officials said both Mistry and Pandole, who were in the back seat, were not wearing seat belts. Officials noted that the luxury car was apparently speeding when the accident happened on Sunday afternoon.

According to police, the Mercedes car covered a distance of 20 km in just nine minutes after passing through the Charoti checkpoint in the Palghar district of Maharashtra, 120 km from Mumbai.

The car hit a road fence on a bridge over the Surya River, killing Mistry and Pandole on the spot. Mistry was returning to Mumbai from Ahmedabad when tragedy struck.

The car was driven by Mumbai-based gynecologist Anahita Pandole.

Elaborating on the importance of wearing seat belts, Mahindra Group Chairman Anand Mahindra tweeted on Monday: “I commit to wearing my seat belt at all times, even when I am sitting in the back seat of the car. And I urge I urge all of you to keep that promise. We all owe our families.”

The latest version of the four-wheel drive GLC 220d 4MATIC comes with a price tag of over Rs 68 lakh. It has a ‘pre-safe system’ whereby the front seat belts can be electrically pre-tensioned in dangerous situations.

According to the Mercedes-Benz India website, the GLC’s pre-safe system reduces the forward displacement of the occupants during braking or skidding in the event of an impending accident.

In addition, the knee pocket in the model protects the legs from contact with the steering column or dashboard in the event of a severe frontal impact, preventing injuries or reducing their severity. It also has a tire pressure monitoring system that warns in the event of a drop in pressure.