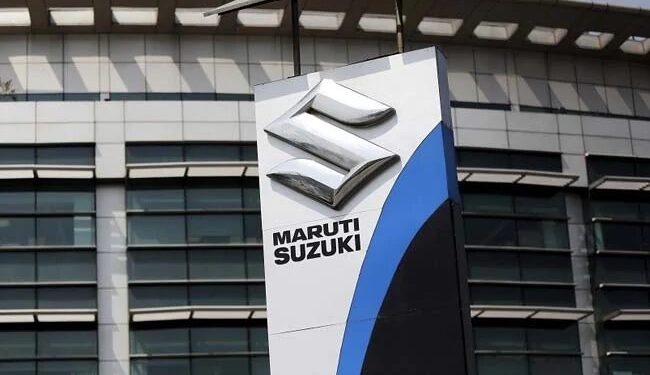 Over the weekend I read a blog by my favorite author, Morgan Housel. I came across an interesting conversation the author’s friend had with Warren Buffett during the backdrop of the 2008 global financial crisis.

The author’s friend drove Buffett around Omaha in late 2009. The world economy was crippled at the time and Omaha was no exception. Shops were closed and businesses shut down.

The author’s friend asked Buffett, “It’s so bad right now. How will the economy ever recover from this?”

Buffett responded with a question of his own: “Do you know what the best-selling candy bar was in 1962?”

“No,” replied his friend.

“Snickers,” Buffett said. “And do you know what the best-selling candy bar is today?” Buffett asked.

“No,” replied his friend.

And that was the end of the conversation.

Here’s the take away from this simple conversation.

Focusing on what will never change is more important than trying to anticipate how something might change.

While it’s important to understand and predict how technology is going to change our lives, isn’t it just as important to focus on things that will never be replaced?

When we talk about change, EV is at the top of the list.

I am sure you have read countless articles on why EVs are the next billion dollar opportunity and the best EV stocks to buy in India.

So let me play devil’s advocate this time and try to figure out why India’s largest automaker, Maruti Suzuki, isn’t jumping on the electric wagon.

Tata Motors is in the news almost every month with innovations and new EV launches. On the other hand, Maruti is moving in the hybrid direction with its new launch Maruti Suzuki Grand Vitarra.

Tata Motors is the undisputed market leader in passenger EVs. Maruti doesn’t even have a single EV product. The first EV will be launched in 2024-25.

So this is the billion dollar question…

Is Maruti behind the curve in the EV race?

To answer this question, let’s look at the numbers.

Aside from factors such as the lack of charging infrastructure, I have analyzed the cost dynamics of owning an electric car in the table below.

It takes 16 years to recoup the extra costs of purchasing an electric car. 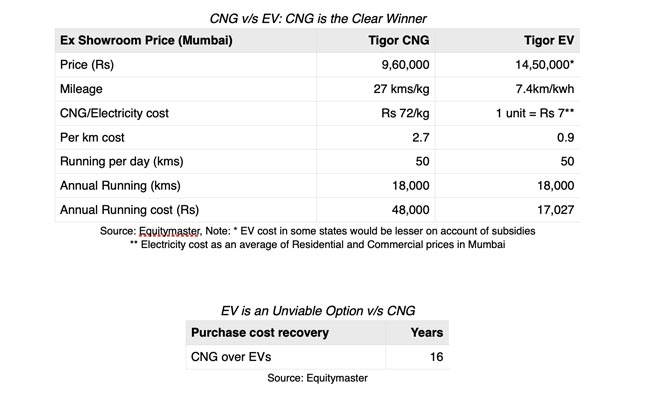 Practically speaking, it makes no sense to choose an EV over a CNG car. I haven’t even considered EV battery replacement costs.

It seems that Maruti’s focus on targeting the growth of the CNG segment is sound.

The contribution of CNG to the total passenger car industry was 8.5% in FY22. But CNG cars contributed to 17% of Maruti’s total domestic sales during the same period.

After all, most CNG cars are small cars that make up 40-45% of the total industry volumes. The important statistic here is that Maruti’s market share in the small car segment is above 70%.

Isn’t that a smart move to focus on the small car segment, where you are the market leader, where the share of CNG fuel is increasing?

But there’s a catch here…

In the SUV segment, Maruti has launched hybrid technology, which is battery plus petrol, as opposed to its competitor Tata Nexon, which is a pure EV. 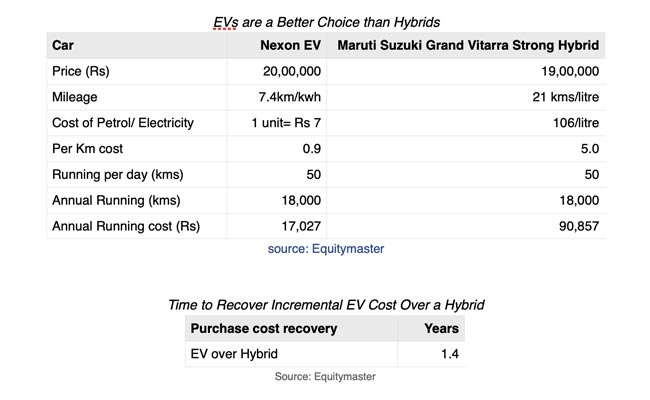 While it takes 1.4 years to recoup the incremental cost of an EV, the cost savings of using an EV are huge after the initial cost recovery. EVs only cost 20% to drive compared to a hybrid, as shown in our calculation.

I have not included the battery replacement cost for an EV which I believe is Rs 0.5-0.6m as of today. The reason is that the replacement will take place after 5 years, by which time the cost of the battery would be drastically lower than what it is today.

Also, most car owners replace their vehicles after 6-7 years.

Where is Maruti in the EV v/s CNG v/s Hybrid race?

Maruti is the leader in the hatchback segment, which accounts for 45% of the total car volume. So the company’s strategy to focus on CNG fuel and not electric vehicles makes sense. Market leadership together with favorable cost dynamics works for Maruti.

If we exclude the battery replacement aspect, it makes more sense to buy EVs than hybrids.

However, this argument is watered down when we talk about the lack of EV infrastructure. This is because convenience often trumps cost.

Also, Maruti’s plan to use hybrids as a bridge between internal combustion engines and electric vehicles could work, as the ecosystem takes time to evolve.

I think the lack of a first mover advantage could work, as evidenced by the two-wheeler sector.

What do you think dear reader? Is Maruti on the right track by taking the hybrid approach and going slow in EVs?

(Disclaimer: This article is for informational purposes only. It is not a stock recommendation and should not be treated as such.)