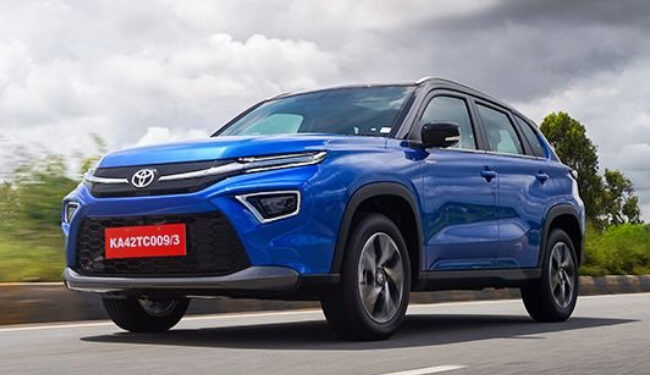 Toyota Kirloskar Motor said it is recalling about 994 units of the Urban Cruiser Hyryder. (File)

In a statement, the company said it has initiated a voluntary recall of certain Urban Cruiser Hyryder units to investigate a possible problem with the mounting of the front seatbelt shoulder height adjustment plate.

Toyota Kirloskar Motor (TKM) said in a statement that about 994 vehicles of the specified models may be affected by this concern.

The plate for adjusting the shoulder height of the front seat belts will be replaced from the suspected vehicles, it added.

The recall is being initiated in line with the company’s commitment to customer safety and satisfaction, the automaker said.

No failures of the affected component have been reported to date, it added.

TKM launched the Urban Cruiser Hyryder in July of this year. The model is priced between Rs 10.48 lakh and Rs 18.99 lakh (ex showroom).

Earlier in the day, Maruti Suzuki India said it is recalling 9,125 units of its Ciaz, Brezza, Ertiga, XL6 and Grand Vitara models to address possible defects in some of the front row seatbelts.

The affected vehicles were produced between November 2 and 28, 2022, the automaker said in a registration dossier.

The automaker introduced the model, a rebadged Maruti Vitara Brezza, in September 2020, recording cumulative wholesale sales of more than 65,000 units to date.

In a statement, the company had said that in order to further improve the mobility experience of customers, its product strategy is focused on bringing in models based on customer feedback.