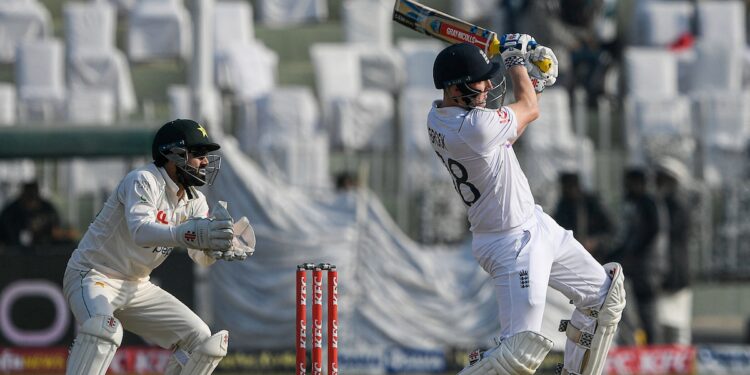 England took a few quick wickets on Sunday after setting Pakistan a daunting target of 343 for victory with one day to play in a high-scoring first Test at Rawalpindi. Pakistan lost Abdullah Shafique (six) and skipper Babar Azam (four) in their second innings before Imam-ul-Haq (43) and Saud Shakeel (24) finished day four at 80-2. Earlier, Harry Brook hit a fiery 87 as England batted aggressively in their second innings before declaring at 264-7 — a 78 lead.

Debutant spinner Will Jacks took a career best 6-161 as England finally shut out Pakistan for 579 in response to their mammoth first innings run of 657.

Looking for ten Pakistani wickets in a maximum of 130 overs, England showed their intent early on and Ollie Robinson soon bounced off opener Shafique – who scored a century in the first innings.

In the same over, he hit Azhar Ali with a sharp, rising pitch, forcing him to retire with an injured finger. Then Stokes got Pakistan skipper Azam’s prized wicket by forcing a lead on a rising delivery that landed safely in the hands of keeper Ollie Pope – a shock to the holiday crowd of 14,200.

But Haq – who also scored a century in the first innings – tied the ship with Shakeel with a 55-run third wicket score.

The second session was England’s, who added 218 runs before declaring Brook bowled in Naseem Shah’s final before tea. Brook broke 11 boundaries and three sixes in a reckless blow, following his 153 in England’s first innings.

Root also played a part in a 96-run partnership with Brook, scoring his 55th Test half century.

Leg spinner Zahid Mahmood dismissed Root and Stokes (zero) in the same over to finish with figures of 2-84, while Naseem took 2-66 and Mohammad Ali 2-64.

In the morning session, debutant Jacks made sure all three wickets fell after Pakistan resumed at 499-7, but not before the host’s opponents scored freely on a much-maligned flat Rawalpindi Stadium pitch.

FIFA WC 2022: Morocco fans celebrate after team moves into round of 16