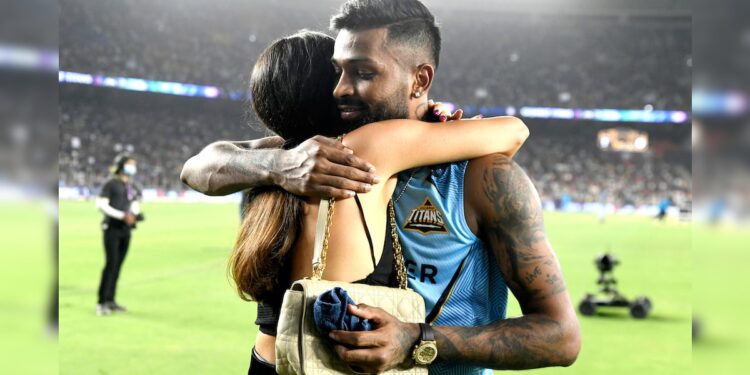 It was a season to remember for IPL debutants Gujarat Titans as the squad won the title after beating Rajasthan Royals in the top match. Skipper Hardik Pandya brought his A-game to the middle when he took three wickets, including Jos Buttler’s key scalp. When Shubman Gill and David Miller won Gujarat, it was Hardik’s composure that was most noticeable. There were no flashy celebrations and he continued to congratulate his players and coaching staff.

When the cricketing action was over, Hardik’s wife Natasa Stankovic also came to the field of play and hugged Hardik. Natasa was visibly emotional after seeing Gujarat Titans win.

Speaking at the post-match conference after the IPL triumph, Hardik said: “She’s someone who is very emotional, she gets really happy when she sees me doing well. She’s seen me go through a lot of things; she has a kind of I’ve seen me work hard no matter what. I’ve worked really hard; I don’t talk about it much, but she knows how much hard work goes on behind the scenes.”

“My family has always been my strong support. My brother Krunal, my sister in law Pankhuri and my other brother Vaibhav. Many people who were part of me and my wife and my son, they were fantastic in making sure I stay in the best frame of mind and you know when the crisis situation comes and when i play it helps me a little bit because i know my family is there to support me no matter what.. cried when i called him, my sister in law cried too, it’s the tears of happiness, that’s a wonderful thing. I live on and I feed on love that I keep getting from my family,” he added.

Speaking of the final between GT and RR, the latter scored 130/9 in 20 overs. Jos Buttler scored the highest score with a stroke of 39 while for Gujarat skipper Hardik returned with 3-17.

Chasing 131, Shubman Gill and David Miller went unbeaten at 45 and 34 respectively to take Gujarat across the line with seven wickets and 11 balls left.

For Rajasthan, Trent Boult, Prasidh Krishna and Yuzvendra Chahal returned with one wicket each.

Earlier in the tournament, Gujarat topped the league with 20 points from 14 matches and entered the final after outclassing Rajasthan Royals in Qualifier 1.