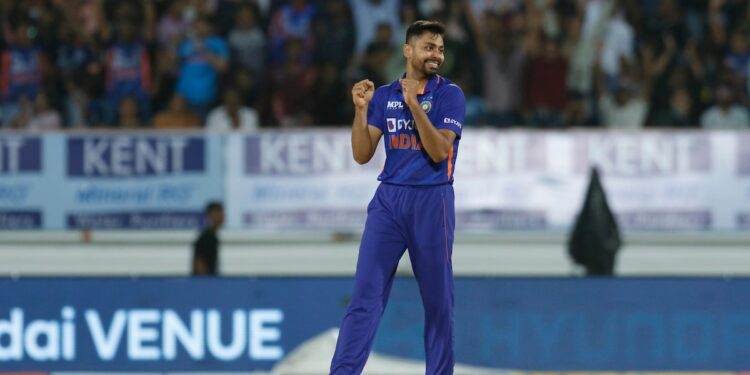 Indian pacer Avesh Khan felt the pressure after going wicketless in the first three matches, but said head coach Rahul Dravid’s confidence in him prompted him to put in a match-winning performance in the fourth T20I. Avesh relied on hard work to finish with the best four to 18 marks in his fledgling international career. Despite defeats in the first two matches, India did not change the playing eleven.

“The team hasn’t changed in four games so thanks to Rahul (Dravid) sir. He gives everyone chances and plans to keep them running long enough,” Avesh said during the media interaction on Friday night.

“He doesn’t drop a player after one or two bad performances because you can’t judge a player based on one or two games. Everyone gets enough games to prove themselves.”

“Yes, I was under pressure. I had zero wickets in three matches but Mr Rahul and the team management gave me another chance today and in the end I picked four wickets. It’s also my father’s birthday so it’s also a gift for him.” †

The 25-year-old decided after a conversation with opener Ishan Kishan on his game plan to bowl on a difficult field.

“Whenever we are first to bat, I always ask the batters how the wicket played, whether it was two-pace or not.

“I spoke to Ishan (Kishan) today and he said that hard balls are not easy to play; some bounce, some stop and the others stay low. Then I planned to attack the stumps and bowl the hard lengths consistently It’s in my hands to bowl well, not pick wickets.

“The slower ball wasn’t very effective in today’s wicket so I tried bowling hard lengths with the occasional bouncer to change things up.” India fared well, reaching 169 for six after a poor start, thanks to Dinesh Karthik’s career-best 55 from 27 balls.

“Today’s wicket was not an easy one for batters, it was two pace although DK bhai, Hardik and Rishabh all played well. 170 was a very good total on this wicket and all we wanted to ensure was pick a few wickets in the power play,” Aves added.

The fast bowler from Indore, just six matches old in international cricket, is way down the pecking order and gets his chances because players like Jasprit Bumrah and Mohammad Shami are not part of the series.

Asked about his chances of being part of the T20 World Cup roster, he said: “I have no control over the roster. I just want to give my 100 percent in every game I get to play for India. I don’t want one regret the effort I put into my performances.”