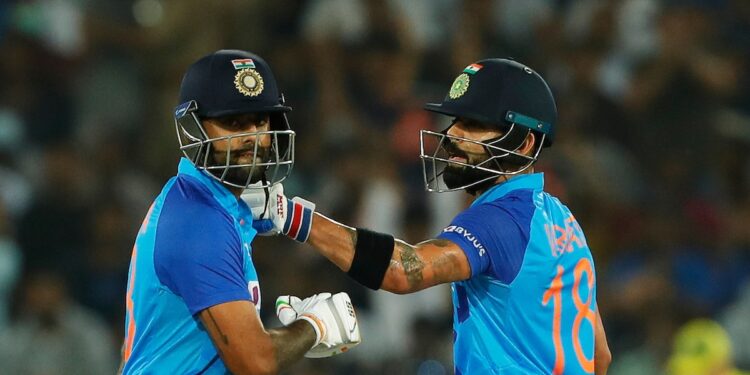 Virat Kohli’s sparkling stroke play was matched by maverick Suryakumar Yadav’s fireworks as the duo clinched India’s six-wicket victory over Australia in the third and final T20 International in Hyderabad on Sunday. Kohli (63 from 48 balls) and Suryakumar (69 from 36 balls) shared a 104 run partnership to set the stage for the Indian victory. India won the series of three games 2-1. Cameron Green (52) scored up front while Tim David (54) provided the final flourish as Australia put 186 in front of six after being invited to bat.

As the field offered grip and twist, Axar Patel (3/33) took three wickets, while also delivering a sensational run-out. Yuzvendra Chahal (1/22) was also in his element, bowling an economic spell.

In the pursuit of 187, India didn’t have the best start as openers KL Rahul (1) and Rohit Sharma (17) were out in the first four overs.

But Kohli and Suryakumar hit with authority, hitting boundaries and sixes at regular intervals to keep the required running speed in check, as Australian bowlers struggled to find answers.

Halfway through, India needed 96 with eight wickets in hand.

Suryakumar soon brought his fifty as the duo looted 15 from Adam Zampa’s 13th over.

Australia made a comeback to end Suryakumar’s excellent innings, with India needing 53 of the last six overs.

Kohli, however, went on with his business, passing Pat Cummins for a six in the next. He spent his first fifty of the series in 36 balls.

Australia threw some tight overs to keep themselves in the game.

But Hardik (25 not out) and Kohli hit a pair of sixes, but the latter was out and left India, needing five runs from four balls.

Previously, Groen was on the offensive from the start. He crushed the second throw to square leg for a huge six, which was followed by a border when Australia collected 12 from the first over after being asked to bat.

Green continued the attack, crushing Jasprit Bumrah (0/50) for a four before hitting back-to-back sixes, including one that moved to the second level much to the dismay of the partisan crowd.

With Australia going over 13 runs per over, Axar made the first breakthrough for the home side when he delivered a slower bowl, forcing Aaron Finch (7) to miss the shot while Hardik retrieved the ball halfway through.

Green transferred his 50 in 19 balls in the fifth, his innings littered with seven fours and three sixes. But the opener was soon boxed in by Bhuvneshwar Kumar (1/39), who threw a little wide, only for the Australian to hook the ball to KL Rahul.

Australia looted 66 runs for the two-wicket loss of the Powerplay.

But Glenn Maxwell’s (6) woeful run continued as Axar delivered a brilliant run with a direct hit from the boundary.

There was some doubt as to whether it was a run-out as wicketkeeper Dinesh Karthik’s gauntlet had knocked out one bail, but in the end the decision fell in India’s favour.

Just before half time, Karthik Smith (8) stumbled who was tricked by Chahal’s wrong ‘un’ as the Australian at bats seemed to be falling apart.

But Josh Inglis (24) and David held the Australian innings steady as the visitors made a comeback.

Skipper Rohit Sharma introduced Harshal Patel (1/18) in the 13th over, but his fight continued. The medium pacer was hit first for six, followed by a no-ball and a walk.

Rohit then brought Axar back on the attack and the leftarmer immediately repaid the skipper’s trust by eliminating Inglis and danger man Matthew Wade.

David hit two straight sixes and a four off Bhuvneshwar, who missed his length in the 18th over.

Sloppy fielding from India towards the end only added to Australia’s tally.