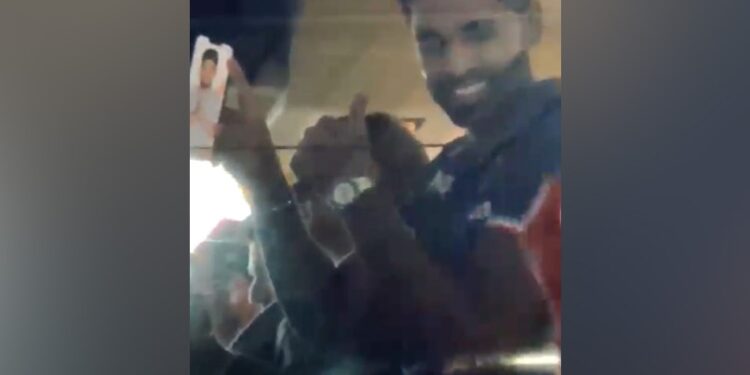 Sanju Samson’s name was discussed extensively prior to the selection of the Indian squad for the T20 World Cup in Australia. However, the talented wicketkeeper batter didn’t make it to the squad. With less than a month to go before the 2022 T20 World Cup, the Indian cricket team has entered the final stages of preparation. Starting Wednesday, the Rohit Sharma-led side will play its last series ahead of the big event in Australia. India’s three-match match against South Africa starts in Thiruvananthapuram, Kerala – Samson’s home state. While he is not part of the Indian squad for the South Africa series, his fan following was evident from a recent video that has gone viral on social media.

The video shows batter Suryakumar Yadav showing fans a photo of Sanju Samson sitting on the team bus. The crowd then went crazy at the sight of Samson’s photo.

While the South African team arrived in Thiruvananthapuram on Sunday, Rohit Sharma and his company reached the state capital the next day. The Greenfield International Stadium has a seating capacity of 55,000. The rates for the upper tier, pavilion and KCA grandstand are Rs 1,500, Rs 2,750 and Rs 6,000 respectively. The tickets for the KCA grandstand seating would include food charges.

The remaining two T20Is between India and South Africa will be played in Guwahati (October 2) and Indore (October 4). The two sides will then play an ODI series of three matches, starting on October 4.

Speaking of recent form, India beat Australia 2-1 in a three-game T20I series at home. They had lost the first game by 4 wickets, but made a good comeback to win the remaining two games and seal the series. Meanwhile, South Africa arrives in India after losing a three-match test series 1-2 against England on home soil.